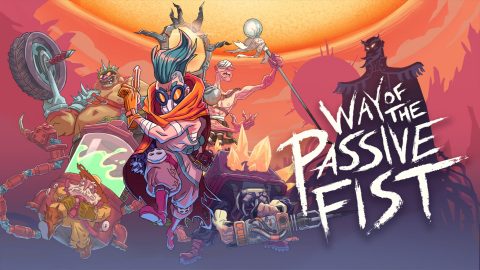 If there’s any genre that’s recieved a resurrection thanks to the efforts of indie developers, it’d be the beat-em-up. Once thought dead and buried by the days of the PS2, the genre has seen all sorts of fresh blood from a myriad of developers. Most of the time, the inspirations for such games are made pretty obvious. This particular brawler has one real gimmick, but it’s one that manages to carry forth a pretty entertaining experience, overall. A brawler focused around the art of parrying the attacks of enemies, rather than keeping it as an advanced, secret technique, seems like it would be an obvious idea. It hasn’t been until now that such a game has that concept as its very focus, however, and it works far better than one might imagine.

The planet Zircon V is dying under the heat of its massive sun, turning the former mining colony into an apocalyptic wasteland. When raiders attack a nearby settlement, a reclusive martial artist known as The Wanderer sets off to defeat them. Eventually, he soon learns that a mad doctor is planning to terrorize the wastes with an army of his own creation, setting the wanderer on a journey to infiltrate the evil scientist’s tower. Through the animated cutscenes that play between stages, more details on the wanderer’s past and the planet he lives on are gradually revealed. It’s not the most complicated of plots, but it does enough of a job of giving enough context to tie each of the ten stages together. 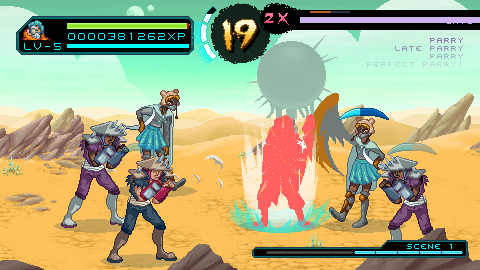 As the title implies, the Wanderer eschews the attack combos, jump kicks, grappling moves, and crowd-clearing specials that make up so much of the genre. Indeed, he has almost no offensive abilities at all. Instead, when enemies move in to attack, your main response is to tap the buttons just before their attacks connect, parrying or dodging their blows and draining the enemy’s stamina. Once they run out of stamina, they’ll tire themselves out, and can then be dispatched by simply shoving them over. The only break in the wanderer’s pacifistic technique are three progressively stronger special attacks, earned by avoiding enough enemy attacks to build up a three-tiered combo meter.

There’s a lot of ways that a concept like this could end up breaking down, and the game manages to avoid them all fairly elegantly. For starters, the window for parrying and dodging is far more lenient than in other brawlers with such an ability. Being a little early still counts, while being just a moment too late will inflict slight damage, but won’t otherwise punish you. Enemies also generally only attack one at a time, no matter how dense their number, each one dashing in and out as they carry out their attack patterns. It makes for a rather forgiving game, once that makes getting into proper rhythm needed to outlast the hordes ahead of you almost second nature. 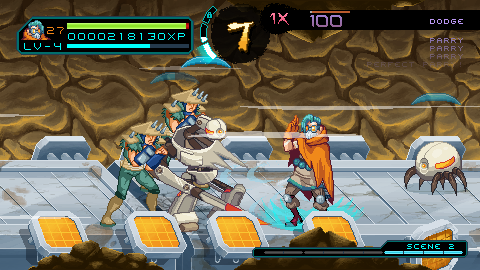 There’s also more and more nuance added to the game as you progress, building nicely on the game’s base concept. Some attacks, like grabs, can’t be dodged, while some attacks come out too quickly to be dodged. Other enemies toss projectiles, which can be grabbed and tossed back to sender with the right timing. You’ll also encounter robotic enemies which obviously don’t tire themselves out, forcing you to fend off their onslaught until you can counter with a special attack. The number of enemy types is a little limited, and you’ll end up encountering all of them shortly after the game’s midpoint. The repetition is somewhat mitigated that each type comes in multiple colors, however, each of which varies their attack pattern somewhat. The bosses are also a particular highlight, each one making you use particular techniques to nullify their attacks and inflict damage upon them.

The game makes a fine effort to keep itself fresh, gradually introducing new enemy types, environmental hazards, and character upgrades earned by gathering enough experience. Unfortunately, that last element feels almost superfluous. You earn the first upgrade, a dash ability, so quickly that having it locked feels pointless. There are also two health upgrades and two special moves to acquire, but the problem is it never feels like there’s any particular reason that these abilities should be gated off. It feels less like you’re becoming more powerful and more that you’ve having an arbitrary restriction suddenly lifted off from you, which hardly has the effect the developers must have intended. 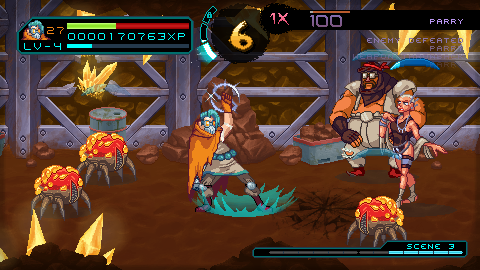 Even without any of the upgrades, Passive Fist is probably one of the most easygoing beat-em-ups you’ll ever find. The difficulty level is completely customizable, letting you set such things as enemy density, how strict parry timing is, enemy damage output, and how common health pickups and checkpoints are. That last point may be the most important, as the game’s default mode offers you unlimited lives, sending you back to the nearest checkpoint upon death. As in most modern brawlers, the game’s true challenge is in mastering its scoring system. Building up high combos and avoiding damage is the key to earning the best of the medals that are tracked for each wave of enemies, and to its credit, the game makes the criteria for earning the best ranks very clear. 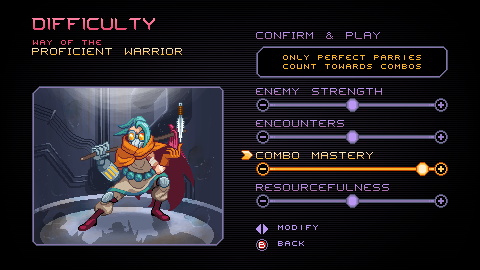 If the game has any real issues, it’s that it feels somewhat light on content. A lack of any kind of co-op mode is a rather large omission for a retro-styled beat-em-up, and the game feels lacking in extra modes in general. An ‘Arcade’ mode, in which you’re offered either thirty or just a single life to clear the game is on offer, but that’s about all there is after you’ve finished the main ‘Story’ mode. Still, it makes for a fun ride while it lasts, even if the game can grow somewhat repetitive if you keep at it for too long. Thankfully, the game’s autosave system means even that isn’t worth complaining about.

The game’s unique mixture of post-apocalypse and new age sci-fi gives it a pretty unique style among its kind. It helps that the sprites are large and cartoony in appearance, harkening more to something like a LucasArts adventure game than your typical beat-em-up. The large sprites certainly have a lot of character, and in a more practical sense, it also helps to make incoming attacks a lot more visible, which helps make the game as approachable as it is. The soundtrack is also a highlight, featuring a lot of high-tempo tracks that always fit the action well, with the first stage’s track in particular being particularly great. 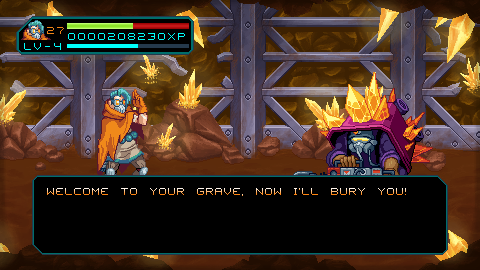 There’s a lot of choice on the market when it comes to the beat-em-up, and there’s plenty of fine options. If you’re looking for something unique, however, Passive Fist makes a fine choice. It might be a little lighter and shorter than some of the offerings on the digital marketplace, but what it has is a finely-tuned, creative experience that’s more than worth exploring.