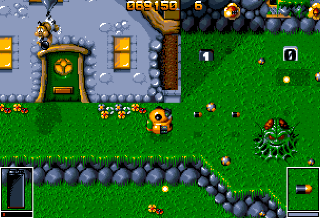 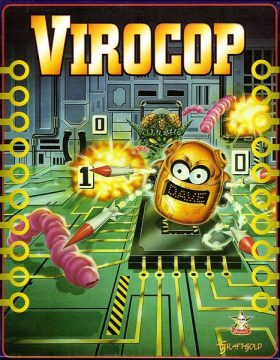 In the wide world of video games there are many self-referential entries, that is, games featuring other games, about developing games, or about a fictional game that is ultimately the game we are actually playing. Graftgold’s 1995 Amiga title Virocop (their last release actually) is an even more convoluted example of the latter case: a game that lets us play as a virtual character entering several fictional games. This game was available for both Amiga 500 and Amiga 1200, a mostly identical version except for less slowdowns and an exclusive set of stages. 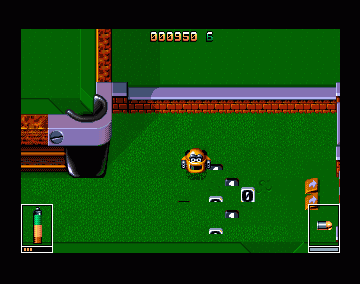 This top-down action shooter is set in a popular virtual theme park named “Gamedisk” being invaded by an army of computer viruses, and the player takes control of DAVE (standing for “Digital Armed Virus Exterminator”, and also one of the working titles for the game along with Virus Alert and Tanky), apparently an anti-virus program in the form of a small robot. DAVE is entrusted with the task of cleaning the park up before the infection spreads to all of cyberspace, or something to that effect. The idea of the virtual theme park, a reference to the (at the time cutting-edge) theme of virtual reality, is mostly an excuse to have every level inspired by a different gaming genre. The first series of stages is based upon sports titles, then there are ones based on platform games, military simulations and fantasy RPGs. Every one of them is packed with references to other Graftgold properties (amusingly, some of the fictional games featured seem to be by Graftgold as well, according to the intermission pictures) and popular titles of every kind, from classic arcades like Pac-Man and Space Invaders to then-recent home computer successes like Cannon Fodder and The Chaos Engine. Players are reminded that they are in a virtual world by the little ones and zeroes (probably glitches caused by the viruses) that pop up from the ground and only act as scoring points items.

Our yellow droid is initially armed only with the standard machine gun with unlimited ammo, a grenade launcher and mines, but by blowing up the games’ own enemies he can collect colored orbs. These can be spent in the “shop” that appears at the end of every stage. It is a circuit board with a chip connected to several icons that stand for the other weapons, from lasers to flamethrowers and homing missiles. The orbs are used to complete the circuits that connect the chip to the icons, thus adding the weapons in DAVE’s inventory. The idea is interesting and fits well with the “game system inside a game” theme, but since you don’t know which weapons are better suited for the upcoming levels, there’s the risk of spending too many orbs for a seemingly powerful weapon that becomes useless instead, forcing DAVE to hunt for power-ups and get destroyed by the many hazards of the stages. 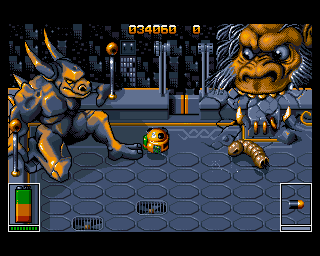 This can happen fairly often, since the game isn’t exactly easy: most levels are huge and maze-like, and the enemy characters attack from every direction, as opposed to the stationary viruses. DAVE’s movement is also a bit too sensitive and it’s easy to jump off ramps by mistake and repeat parts of the levels because of that. After every fourth stage there is a boss battle, ranging from a killer hockey team in the sports world to a fire-breathing dragon in the fantasy world.

The genres featured in the virtual games are quite disparate, but the genre of the actual game remains consistent throughout. The only time Virocop does something different is in the fantasy world, where you have to look for keys to open doors. It’s the least original thing ever, and while they could have parodied this cliche and the fact it is so overused, it’s all played disappointingly straight, and getting bombarded by baddies while you’re looking for the last damn key is just another source of frustration. 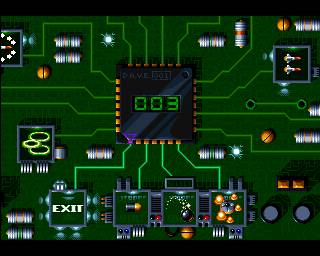 The game is quite long, but luckily there are passwords to continue from the last level reached. However, you are forced to destroy all the viruses in a level since blowing them up releases the letters that form the password. Also, these passwords are randomized and different every time you start a new game by inputting the player’s name.

The feeling that near the end Virocop is overstaying its welcome isn’t helped by the new area added in the enhanced AGA version of the game. This fifth and final level is a bit boring and unappealing, being just the circuits of a humongous computer instead of the elaborate sets of the previous fictional games, and it feels like the A1200 is underused. Interestingly, it’s not the insides of the “actual” Gamedisk CPU, but apparently a fictional game made to look like the insides of a computer. A game that we are playing in a virtual world residing in a game which is running on our computer… or, more likely, on an emulator on our computer. It doesn’t get more meta than this. 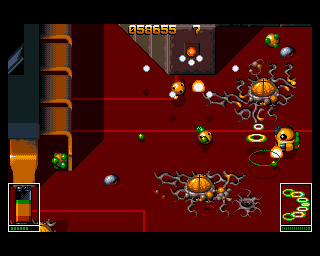 DAVE inside a CPU inside a game inside Gamedisk inside Virocop

While the gameplay can get tiresome, one can’t deny Virocop‘s artistic and technical merits. The animations are very fluid and include details such as bullet casings flying everywhere and the robot’s head detaching when falling from a height. The various stages are very detailed and visually distinct from one another, with several clever touches such as the terrain of the sports world that turns seamlessly from a football field to a pool table to a golf green and more. Being a giant in a world of tiny soldiers in the Cannon Fodder-inspired world is also both funny and amazing for all the little details included. The programming is also pretty strong and features virtually (pardon the pun) no slowdowns or actual glitches. An interesting feature is the two player co-op where one controls DAVE’s movement and the other aims the weapons. One single player could even play it as a twin-stick shooter.

Sometimes Virocop is cited as the second sequel to another Graftgold title, Quazatron (1986), a puzzle/shooter with isometric perspective for ZX Spectrum which was followed by Magnetron two years later. However, the only things that actually connect these games are the presence of Steve Turner, the developer of said games, as one of Virocop‘s designers and coders, and DAVE’s vague similarity to Klepto, the robot player character in those titles. Turner never intended Virocop to be an actual sequel, though.

Links:
The Good Old Days Some info about the game.