They say you shouldn’t judge a book by its cover, and Vexx is proof that idiom also applies to video games. One glance at the game’s ugly box art is enough for most people to associate it with both the bargain bin and the dark, edgy mascot characters that starred in games like Shadow the Hedgehog and Jak II during the early 2000s. Vexx admittedly does fall into some of the traps associated with this trend: it stars a perpetually angry protagonist, has a plot involving slavery, includes a moment where you need to kick a goblin in the groin, and the only woman in the game wears an outfit so skintight that it reveals her nipples. If you can push past the unappealing aesthetics, you’ll find a solid 3D platformer with remarkable variety in level design and fluid movement options.

For developer Acclaim Studios Austin, Vexx was something of a return to their roots as Iguana Entertainment. Back in 1993, the company found success with one of their first games, Aero the Acro-Bat, but ended up focusing on sports titles and the Turok series afterwards. Development on Vexx began in 1999 and was met with numerous setbacks and challenges, resulting in it not releasing until 2003, just a year before Acclaim would go bankrupt. 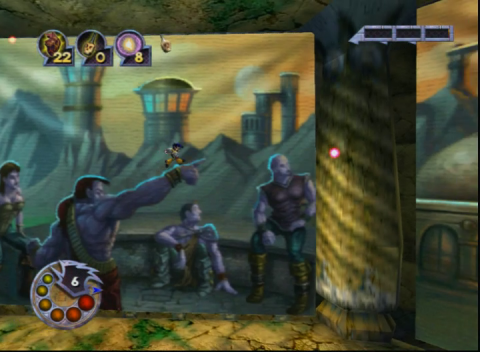 The game was originally intended to have two main characters, a rodent named Clip and a reptile named Mischief, but the idea was scrapped out of concern of it being too similar to Jak & Daxter. The protagonist’s design would change multiple times before the team settled on naming the character Jinx, with the idea being that they would have a penchant for getting into bad situations. Jinx was revealed to the world at E3 2001, but the team would later be forced to change their character once again due to legal concerns with the name. Finally, they decided on Vexx, with the name this time being symbolic of the character’s ability to turn misfortune against his enemies.

Much like Vexx himself, the game’s structure also went through noticeable cuts and the aftereffects can certainly be felt as you play. It was originally intended to take place over 18 levels spread between six different worlds, but the world idea was cut entirely and the final game only has nine levels in total. A comprehensive day/night system was planned to echo The Legend of Zelda: A Link to The Past and its light/dark world, but the idea was reduced down to a minor footnote that only comes into play a few times. The suit mechanic that gives Vexx temporary special abilities was meant to be more substantial and feature more suits beyond just the rock and wing suits that barely get used in the final release. A Game Boy Advance version of the game was also planned at one point, but was ultimately scrapped for uncertain reasons. 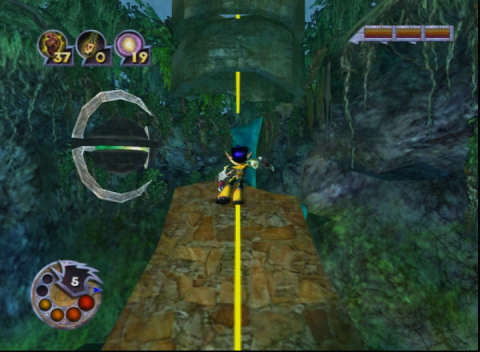 Vexx starts off on a dark note, with the people of Astara opening a portal to a new world, only to be enslaved by its inhabitants known as Shadowraiths, led by the nefarious Dark Yabu. Vexx futilely attempts to fight Dark Yabu, only to have his grandfather sacrifice himself so that Vexx can escape. After escaping, Vexx happens upon the Astani War Talons aboard a Shadowraith ship, legendary weapons that’ll give him a fighting chance against Dark Yabu. From there, his mission becomes one of vengeance, and he’ll need to collect Wraithhearts in order to power the rift gate and locate Dark Yabu. The game fails to make the most of its premise, as there’s only a few cutscenes in the entire game, spread hours apart. Combine this with the game’s scant amount of dialogue and it becomes hard to get invested in anything that’s going on.

Thomas Coles, the lead designer, cites Super Mario 64 and Banjo-Kazooie as major sources of inspiration, and those influences are evident. Each level has nine or ten Wraithhearts to collect, presented as options to the player before entering. The player is given a hint on what needs to be done much like its inspiration, but Vexx goes the extra mile and does so via a poem-like riddle for each objective. One of the objectives in the first level is a blatant spin on Super Mario 64’s Bob-omb Battlefield as well, as it has you climbing a central, spiraling structure in order to fight a boss that can only be defeated by knocking him out of the arena three times.

Where Vexx really shines is in the sheer variety of its objectives between levels. In the Neverglades, there’s a great setpiece where you have to run along multiple tapestries to reach a Wraithheart, and another challenge has you competing against Vexx clones in a Mario Party-esque minigame. The Below takes place in an underwater dome that’s home to a Wraithheart that requires the player to consult the manual for the code to a treasure chest. FrostBlight Mill is a take on the classic ice level with fun objectives like throwing snowballs to break icicles and manning a ghost ship in order to use its cannon to break some doors leading to collectibles. The highlight of the game is Tempest Peak Manor, which takes place in the abandoned residence of a giant and has you doing things like climbing massive furniture, navigating the innards of a piano, and even turning on a game console to play a game of Breakout. There are 81 Wraithhearts to collect, and only 60 are needed to fight Dark Yabu and finish the game. There’s unfortunately no reward for collecting them all (rumors around the game’s release claimed a cheat menu was unlockable, but this is false), but this approach was the right choice, allowing players to skip the ninth level, which features a tremendous difficulty spike. 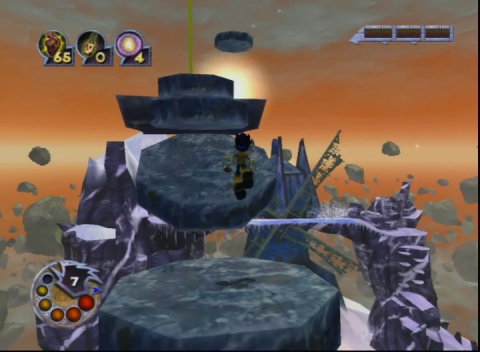 Vexx has both a high jump and a long jump, along with the ability to swim and climb certain structures. Vexx’s abilities can be chained together seamlessly; you can long jump and then immediately high jump after landing, chain multiple long jumps together to move faster, and cancel into any attack immediately after any jump. It’s a good thing Vexx controls tightly, since the platforming challenges can be brutal, frequently combining gauntlets of precise jumps with unique environmental gimmicks over a long sequence without checkpoints. The only aspect of the game that feels rough is the camera, which’ll constantly get in your way by zooming too far out or shifting suddenly at vital moments. Some of the game’s smoothness is lost on the PS2 version, which suffers from noticeably worse performance compared to the Gamecube and Xbox versions.

It was an intentional goal of the development team to make combat a prominent element and the results aren’t entirely successful. The Astani War Talons are fun to use, allowing Vexx to do things like uppercut foes into the air, follow up with multiple aerial kicks, and shoot energy blasts. Even the basic attack combo can hit upwards of 16 times, the excessiveness of which is undeniably flashy. However, Vexx’s foes don’t have nearly enough variety or challenge to make for worthy opponents, since almost all of them do nothing but try to run into you. It almost feels cruel being able to endlessly juggle minor foes that never stood a chance, and the boss fights all rely on the typical formula of hitting weakpoints at specific moments, so Vexx’s combat options are wasted on them as well.

Fittingly, the world of Vexx is drab, with many of the game’s locations utilizing darker colors and lots of open space to create an air of mystique as you explore a world that has seen better days. The major drawback with this approach is that the game looks rather dated today, with many textures being bland and the regular use of dark colors and shading resulting in some areas being difficult to see. The character designs are often downright ugly and tend to have dull colors, pointed edges and odd proportions incorporated in their designs. The music design complements this approach, opting to stay subdued in the background and only increase in intensity during key moments, something that would become increasingly common with the big budget games of future generations. It’s not something you’ll rock out to outside of the game, but it’s commendable for doing something different compared to its contemporaries at the time. It’s clear that Acclaim wanted to follow up on Vexx at some point before their bankruptcy, since the game ends on a cliffhanger and concept art for a potential sequel has been found. While the game couldn’t save Acclaim from misfortune, it has managed to garner a bit of a cult following, with a dedicated wiki, multiple speedruns, and a passionate fan community on DeviantArt being some examples of the legacy it has left behind.

https://www.ign.com/articles/2002/01/09/acclaims-holiday-jinx – Article written after the game’s original reveal as Jinx