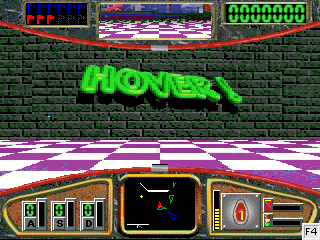 Hover! was one of the first Windows 95 games that came bundled with Microsoft’s then new operating system, alongside such classics as Solitaire and Minesweeper. The 3D looks incredibly dated today, with sprite-based graphics like Doom, but Hover! can still be a lot of fun. 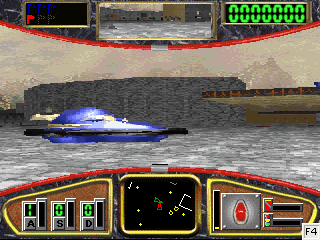 In Hover!, you take control of a floating red bumper car going through mazes to collect blue flags. There are also blue bumper cars called drones that search for the red flags. Whoever gets all their flags first, wins. Later levels add more flags and more drones and more elaborate mazes, making things increasingly difficult after the first few levels. While you can’t actually do anything about the drones, they can’t do much to hurt you, either. 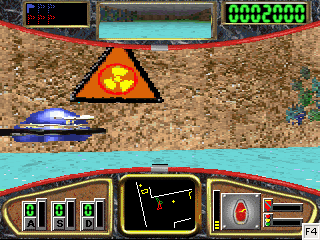 Mazes tend to have two tiers and stairs that can be used to get from one to the other. It’s even possible to drop from one tier to the other at certain locations. There are also traps on the floor to watch out for. Green traps propel the bumper car in any direction at a very high speed, usually into a wall to bounce off of. The red traps make it unable to move for a few seconds until they disappear. 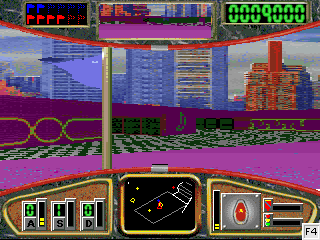 You can pick up power-ups that do a number of things. They can speed up the car, slow down enemy drones, make it possible to jump, put up a wall, or make you invisible. The invisibility is particularly useful, as drones like to ram into you to knock you off course as much as possible. It won’t do any damage, as everything in Hover! is indestructible, but it can be annoying. Some power-ups, however, are actually bad. The bad ones can slow you down, remove the mini map, or take away one of the previously collected flags. The latter one especially is very cheap, as it’s usually positioned right in front of a place where you need to go. Fortunately, it is not very common. 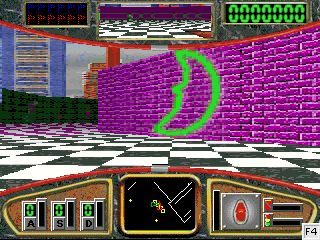 There are three different maze tile sets in Hover!. The first one looks like a castle, the second is a futuristic city, and the third a tunnel. The tunnel looks especially interesting, as it features nuclear radiation symbols and octopus tentacles on certain walls. There’s also a strange red-textured maze that seems to have been cut from the game, but exists in the code. It can be seen whenever a game is started, but none of the levels actually uses this texture. 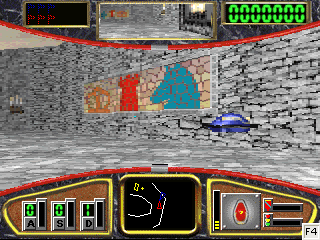 Hover! consists of 16 rounds, but they’re really the same three stages repeated over and over again with different numbers of flags to collect and drones to avoid. Once a maze has been memorized, all levels based upon it end up being very easy, limiting the replay value immensely. It’s still a fun game to come back to every now and then, and a neat little look back at early 3D games and early Windows 95 games. Hover! not only runs in Win95, though, but also in any other version that followed after it, and it is freely available for download from Microsoft’s FTP server.