Threads of Fate is a very interesting title in Square’s history. Not one of its best, mind you. Certainly not one of its worst, either. It was a little experimental title that seemed to try building off some of the ideas of their previous action-RPG, Brave Fencer Musashi, notable for being the start of a regular writer for the company named Daisuke Watanabe, whose name can be found in Final Fantasy X through XIII and a lot of the Kingdom Hearts franchise. The game was also produced by longtime Final Fantasy designer Hiromichi Tanaka, and had experienced composer Junya Nakano, whom went onto composing for the Final Fantasy main series (chances are, if you work at Square for awhile, you’re going to do something Final Fantasy related eventually). However, the director and designer for the game, Koji Sugimoto and Makoto Shimamoto, were relatively new to the company, and they haven’t gone on to prolific careers (though Shimamoto does do some design work for the Xeno series). It’s a shame, because their first major project at the helm was an accomplishment and deserved more love from their company heads and from players …though it’s also understandable why the game wasn’t a runaway success.

The story in Threads of Fate has you playing as two different protagonists, Rue and Mint. 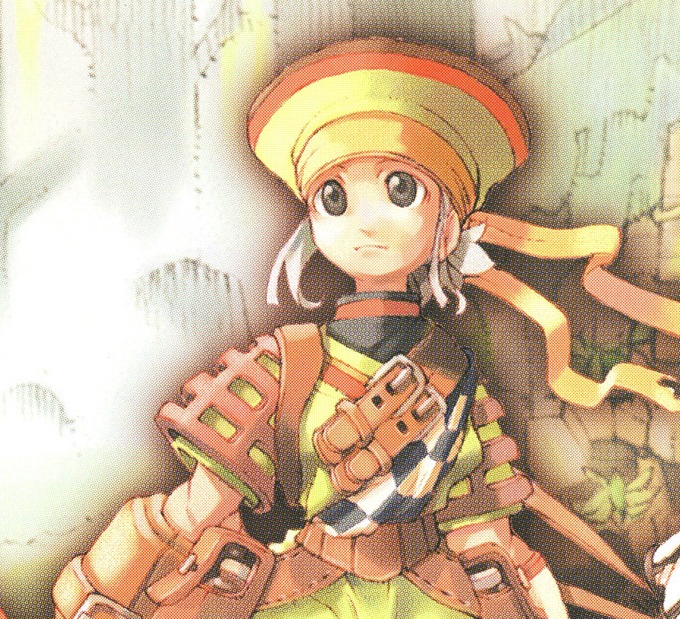 The main and most important character is Rue, a boy with no memory who’s trying to find a lost relic to save the life of his friend Claire, who’s raised him for as long as he can remember. She was attacked by a mysterious man with a monster hand in the snow, and only a powerful magical item can restore her.

The other “hero” is Mint, a self-obsessed princess of a China-like country who loses her right to rule by council decision. She’s trying to find a relic to use as a weapon to defeat her sister Maya’s magic book and regain her right to succession, and maybe get some treasure and followers in the process. She’s also mortally afraid of pumpkins.

While Rue’s story explains everything in the plot and has the most emotional elements to it, Mint’s story manages to stick out. Alas, Rue is one of the most boring and stale protagonists ever seen in a JRPG, and that is quite the accomplishment. There is reason for it as discovered in his story, but that still means you have to deal with him through his whole tale. He has no chemistry with any character and feels more like a background prop most of the time. His personality is just nice and quiet, and that does not make for an interesting character without a lot introspective moments or additional characteristics.

Mint, on the other hand, is a show stealer. The pipsqueak sized punk is a joy with every line of dialog. She’s such a genuinely terrible person, which makes her development into a properly fleshed out one have more weight. Rue’s entire story is an endless string of nothing and sad that feels empty, while Mint has an arc, ups and downs, and manages to have actual dialog with characters that goes beyond “man, your live sure is sad” and exposition. Her story is an actual story, and not just the skeleton of one. You could easily just play her story and skip Rue’s entirely, and you’d be better off for it. A few mythology bits will go unexplained, but it’s all pretty generic and forgettable anyways.

The game’s formula will feel familiar to Mega Man Legends fans. You travel around an island with a central town you can explore and use to get new stuff and open up new areas, while the rest of gameplay takes place in dungeons scattered around, each with at least one boss battle hidden within it. Mint and Rue each have similar play styles, but with one massive difference. They can both jump around and use melee attacks (with Mint having an especially useful dropkick move), but they have different secondary powers that get built into their puzzles. Rue has the ability to collect coins from fallen monsters to turn into a monster himself, letting him move like them and gain access to their special skills. Mint, on the other hand, is a magician who gains new types of magic through her story. Each magic is related to an element, and you can cycle through different spell forms with different ranges and MP use.

Mint’s magic is way more fun to use. There’s a ton of junk monsters out there, with little variation from established moves. Rue is able to handle most everything the game throws at him with just his sword skills. The good ones also have a habit of eating up MP, so you really can’t go crazy with powers until a New Game Plus unlocked after finishing both stories. Mint’s magic consumes a lot of MP as well, but there’s more variety, and challenges are built more carefully around using her spells that Rue’s monster forms. Rue’s monster powers feel like they were an afterthought in development, after the team realized they had to balance the dungeons so that each character could go through them with little issue. 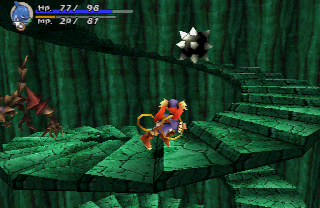 This is PS1-era action in every way imaginable, for good and ill. On the positive side, the simplistic combat never gets stale and has a lot of energy and flow, as Rue and Mint zoom around towards enemies close to them. You can learn it within seconds, and play well with ease. That is, when things work properly. Because of the auto lock-on the game has, you sometimes don’t have as much control as you’d like over where an attack hits, especially with Mint’s spells. Just one step off, and the attack will just shoot off into the void. Platforming sections are also fundamentally broken, more so the 3D segments than the side-scrolling ones. There’s a jumping puzzle in the second dungeon that will drive anyone mad, just because of how stiff the D-pad only movement controls are, not to mention the strange momentum. If your character is turning a slight bit, they don’t turn in place, but rather move in a direction while turning, making precise jumps a mess. If you don’t take things slow, you will fall into a lot of pits, though the game is thankfully a bit lax there as it only warps you back to start or a previous place with minor damage, Zelda-style.

The game’s core mechanics are incredibly janky at times, and by 1999 in Japan and 2000 in the US, far less people were willing to forgive that with the likes of Crash Bandicoot, Banjo-Kazooie, and Spyro the Dragon around. Square never really pegged down satisfying 3D action in this era, or even in the PS2 era. It’s a shame, because Square action games have interesting and charming elements in them, this game not excluded. Despite a lot of little frustrations, the game is kind of adorable and refreshingly ambitious. 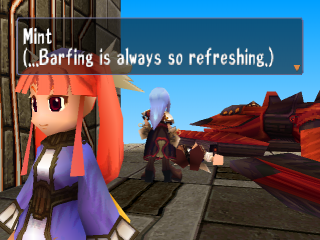 There’s some thoughtful ideas on free will and responsibility, and the cutscenes have a cinematic flair while keeping the graphics in-game, complete with a fast editing style that conveys energy and emotion over simply showing the action presented. Square’s obsession with film was really starting to develop during this time period, and Threads of Fate benefits more from it than any major title they released because it keeps everything in one art style. The game runs in one of the PS1’s higher resolutions, making it look crisper than many others of its type, and the simplistic texturing on the character models ensues that they still look excellent, even in close-ups. Both stories are pretty simplistic, but they’re very well executed and stuck with me more than most any of Square’s more modern works.

There’s a lot of passion here, especially in the lovely score. It’s not too interesting stylistically, but they really capture the emotion and energy of a scene, even with the limited PS1 sound quality. The main theme really sets the tone well, with a lot of pep and a sense of adventure, and both Rue and Mint have their own musical styles in their stories that fit their backgrounds and personalities well. The translated script also oozes charm, with that simplistic but cute script style from the era, back before translations aimed more for self-awareness.

All that said, it’s really hard to justify the two stories split. Combining them into one story that has you switching between the heroes would have made more sense, and made the game far less redundant. There is very little difference between both stories as far as levels and bosses go, and Mint and Rue are far too similar in their basic fighting style to make fights less repetitive. This element, above all others, seems to be what lead to the game stagnating and failing to get a cult audience, unlike its younger sibling Vagrant Story.

Or at least one would think. We did see a doujin sequel in Duo Princess, made by the same people behind the lovely Recettear. So, the game wasn’t completely forgotten, not many can say they had a fan-game made after they disappeared from the public consciousness. Threads of Fate wasn’t some lost gem, but it was one of the more interesting titles of Square’s PS1 output. It’s definitely a must if you’re interested in Square’s history or the evolution of Action RPGs, or if you just want to try something a little different, even if it’s rough around the edges.