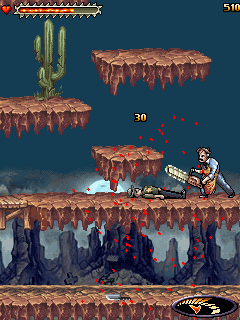 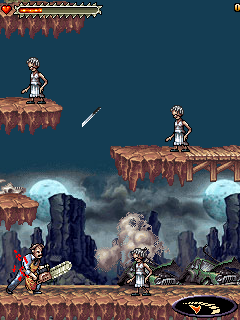 The other Texas Chainsaw Massacre game is based on the remake. That movie came out in 2003 – this mobile phone tie-in was released three years after the remake came out. It was made by HeroCraft, a company known for making lots and lots of crap and putting it on mobile phones, iOS, and Blackberries. The mobile phone Texas Chainsaw Massacre is a 2D platformer where you once again play as Leatherface, and must hunt down victims with your chainsaw, though it’s obviously an entirely different game from the Atari 2600 release.

In terms of gameplay, you move left and right with the 4 and 6 buttons on the phone keypad. You jump with 8 and press the center button to turn on your chainsaw. You move slower with your chainsaw on and don’t jump as well, so you will want to navigate platforms with the chainsaw off and fight with the chainsaw on. You kill enemies by running into them with the chainsaw on and waiting for them to fall down and die. You don’t have to worry about fuel in this one, so go head and hack away all you want anyway. Every so often enemies will drop temporary power ups, which all do nearly useless things like give you another chainsaw tethered to one you already have. It looks ridiculous and is a very hard weapon to use effectively, making the powerup worthless. There is also flaming chainsaw, which looks awesome and makes you do more damage, and a boomerang, which kills enemies on higher platforms by throwing flying chainsaws at them. All power ups have a timer, and upon expiring, you go back to your normal chainsaw.

Enemies are very different this time around. Some of them fight back by throwing cleavers or stabbing you with knives while others, like in the original, just run around and panic, hoping you’re too slow to kill them. There is a lot of blood and gore this time around. It practically sprays everywhere whenever you or an enemy gets hit with anything. There are also loud blood curdling screams everywhere, which makes the sound much more annoying.

As expected, the controls are pretty poor, as playing on a phone keypad never feels right. Leatherface sort of floats in the air while jumping, like he’s underwater. The controls are even less responsive when the chainsaw is out. It’s pretty obvious that this was just a quick cash-in, not really aiming to be an enjoyable game, just existing to trick people into getting it on their phones if they liked the movie. Some of the feel of the movie is lost, however, when a granny that flings axes can easily kill Leatherface.

When you die, you get a Game Over, but you can select which level you start at from the opening menu and pick up where you died. This feature effectively removes what little challenge there was. It’s so easy that the continue feature feels unnecessary, as the game is also quite short.

There are nine levels in total. The first three take place in Texas, where you fight harmless businessmen, grannies with cleavers, and policemen with shotguns. The second three levels are in Chicago, where you fight grannies with axes, demon basketball players, and punks with knives. The last three levels are in Washington D.C., which have you up against the United States military and girls with swords. If you manage to complete the game, which is very easy despite poor controls, a girl with a sword cuts Leatherface’s arm off. 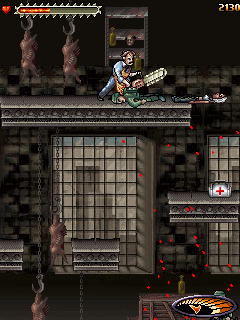 HeroCraft would later lose the license to The Texas Chainsaw Massacre. To rectify this, HeroCraft re-released the game to the less copyright infringing title California Chainsaw Massacre. Other than changing the title and the main character, who is now bald and wearing a tank top, it is the exact same game.

The Texas Chainsaw Massacre for mobile phones is a very bad game, but it has a purpose. In the Atari 2600 version, people were shocked by the mere thought of playing as a killer with a chainsaw. Even though there was no blood, no gore, and no bodies lying about, it was still deemed too violent. The mobile phone version has all of those things, but no one seemed to care, and thus it fell into obscurity. Part of it had to do with the fact that no one really played mobile games back then, but the world has also changed a lot since 1983 and violence is a lot more socially acceptable in video games, for better or worse.