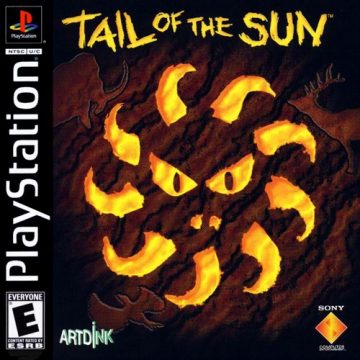 In the PlayStation’s early days, Artdink released Aquanaut’s Holiday, a “non-game” that attempted to present a non-linear, non-violent, open-world ocean experience. It’s a nice idea, later more fully realized in Arika’s Everblue and Endless Ocean series, but in the first year of the PS1, “ocean exploration” meant a flat blue space with a blocky, foggy sea floor and somewhat mystifying controls. Tail of the Sun, an uncategorizable hybrid of caveman sim and open-world adventure offers up an only slightly more game-like experience. 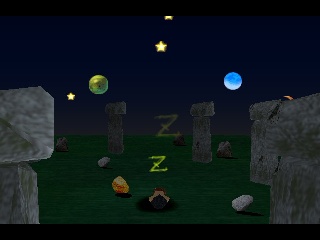 It’s conceptually interesting – offering up a huge, completely open map with day/night and weather cycles, not to mention hidden secrets like aliens and stone circles. Your goal in this big, primal world centers on eating and hunting to build up stats and advance your tribe, until you can take down enough mammoths to build a tower to the sun out of their tusks. The open map is one of Tail of the Sun‘s more redeeming qualities. Neither the deepest ocean nor the highest mountain are off-limits, but the dangers in your way emerge more from the controls than the untamed land. Movement is awkward overall – the run button brings you gradually up to speed and skids to a lengthy stop when released. Your character tends to stick directly to the angle of a slope instead of standing upright on inclines. Swimming is rarely successful, usually resulting in a gravity-defying leap peaking in a peculiar, arms-flailing float. 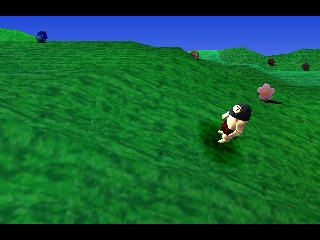 To add to the problem, your caveperson needs sleep and sets their own schedule about it. These naps can occur at anytime, frequently sending you sliding down mountains and slopes with fatal results. You can eventually wake with some button mashing, but that only makes your character more likely to sleep again sooner. Hunting is just as problematic, pitting your loose controls and fixed behind-the-back camera view against animals that frequently outrun and outmaneuver you. Your tribe’s advancement unlocks better weapons, but they don’t help with these basic frustrations. That advancement takes place through eating food items that give varying boosts to stats like culture or swimming ability. Charmingly, these food items are anachronistic Japanese sweets. Less charmingly, the shapes of these cookies are completely removed from the game’s visual representations of stats: a green leaf shape boosts your speed, while a red one affects your strength. Trying to mentally catalog random bakery shapes and hoping your character won’t have another inopportune lapse into narcolepsy exemplify the aggressively idiosyncratic style that moves Tail of the Sun from an interesting experiment to a hair-pulling nonsense for most players. 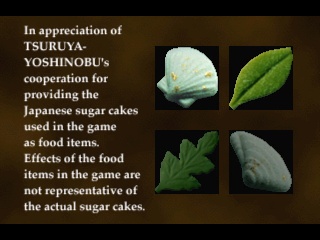 It’s this style that makes the game’s myriad broken aspects almost seem intentional – when a game opens with an awful/funny name entry screen, you can feel the stubborn ambitions of the developer in every element. That screen isn’t just hideous, it’s hideous for the sake of conveying the game’s reckless attention to the “wild, free, simple” style its title screen espouses. The music carries the same offbeat feel with lo-fi ambient sounds that feel simultaneously out-of-place and just right for the setting. 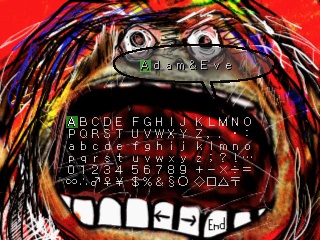 And yet the potential artistic experience the game aspires to never really works because the game itself barely works. It’s endlessly memorable and even rather charming in short bursts or the right circumstances – when you fall asleep in the middle of an open field, the wheeling, stylized night sky effect may bring a smile to your face. When it interrupts a key hunting trip, the game ascends into the ranks of unforgettable bakage-dom.