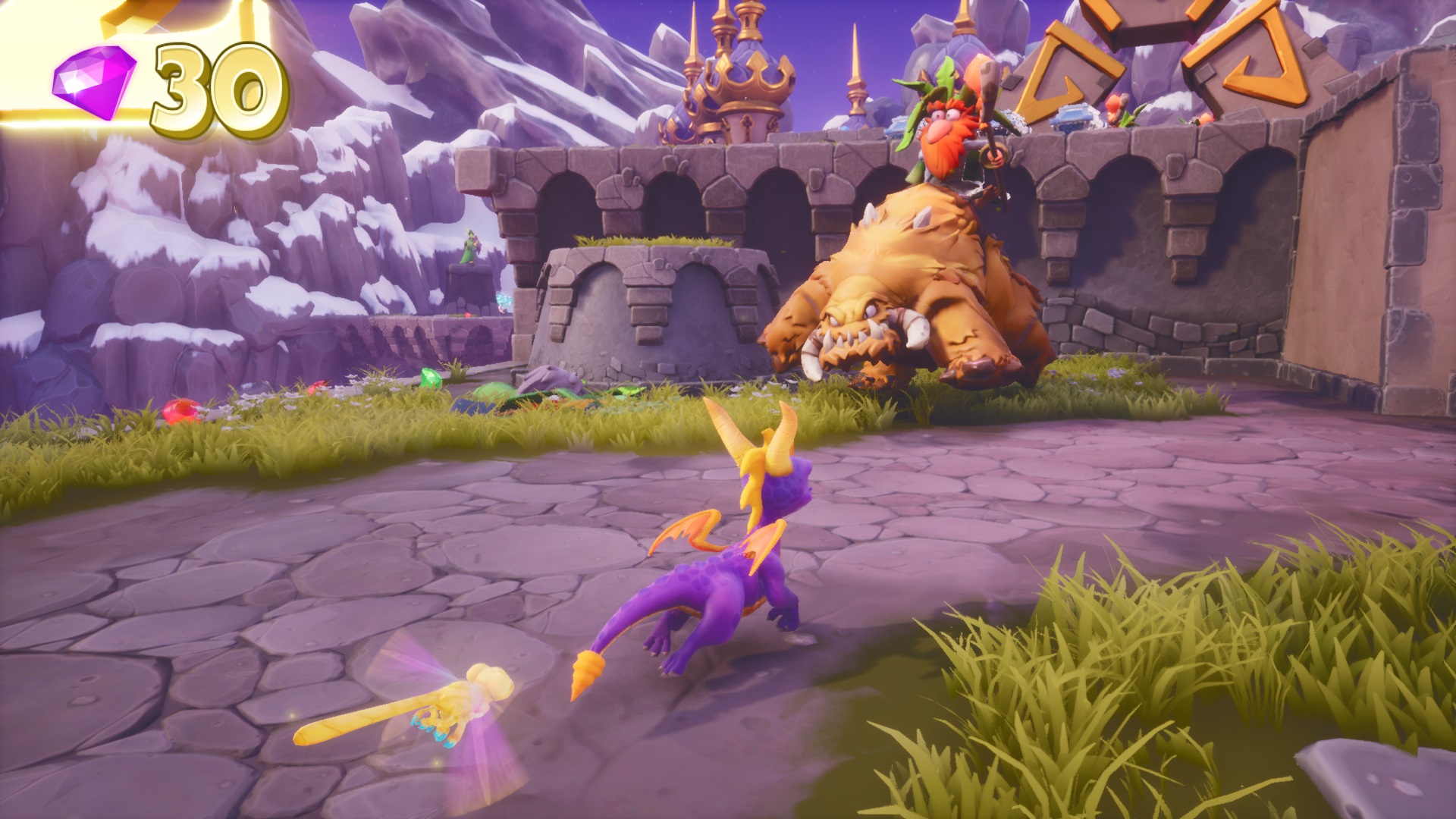 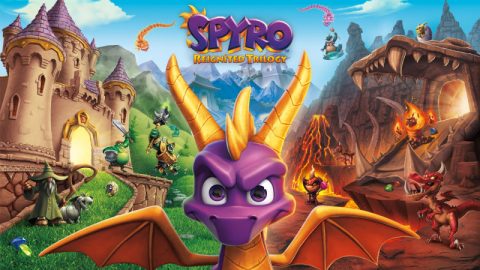 After a few middling sequels and a short-lived reboot, the Spyro series wound down while its main character began appearing in the Skylanders toys-to-life games. It seemed like the end of the old style, but Spyro suddenly returned in the late 2010s with the Spyro Reignited Trilogy, which sought to remake the original PS1 classics.

Like plenty of other remakes being made around the time, these remakes didn’t radically reimagine the originals in terms of content or genre, but instead sought to recreate them as faithfully as talent, time and limitations allowed. While advertised as remasters (much like its sister series Crash Bandicoot’s N. Sane Trilogy), it’s important to keep this distinction in mind because these aren’t the exact same games. 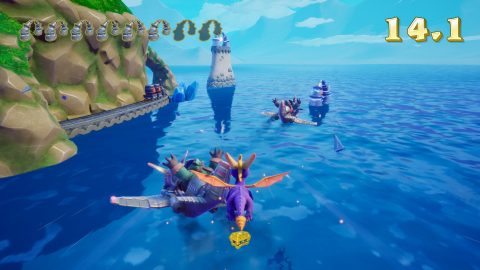 Reignited contains remade versions of Spyro the Dragon, Ripto’s Rage and Year of the Dragon, replicating the originals’ design while offering a new art direction. For the most part, that means a lot of their qualities have been retained – the way all mechanics flow naturally into each other, the reactive enemy AI, the amount of choices offered by the games’ open nature, and many more. That’s not to say that developer Toys For Bob coasted on those qualities, as they’ve done a lot of work to adjust things.

The core controls have been tweaked slightly, pulling from the sequels in particular for how Spyro moves, and offer a very satisfying character to control in a way somewhat distinct from the originals but working entirely on its own terms. However, some adjustments take a while to get used to. Charging is slightly slower overall, making it harder to catch egg thieves, and you can’t hover immediately after a short glide like you could in the originals. Where this becomes troublesome is when you’re swimming or flying in the speedways, as the turning is now so loose that it’s much harder to get where you need to precisely.

An admirable attempt has been made in carrying mechanics originally exclusive to one game over to all three. The rolling from Spyro 1 returns, you can click the left thumbstick to have Sparx detect gems, the level warp function from YotD lets you return to any visited stage, skill points have been created specifically for Spyro 1, level maps in the style of Ripto’s Rage have been added to every stage, and you can even activate several of the original cheat codes like changing Spyro’s color or turning him 2D. It demonstrates a solid understanding of the various ways people can enjoy the games and makes those options more easily available, though it is strange that the hover mechanic wasn’t retroactively applied to Spyro 1. 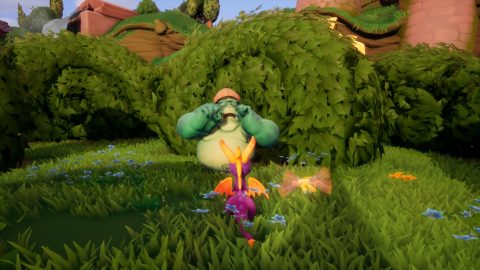 Where things become less solid is in the implementation of the minigames and new characters for Ripto’s Rage and YotD. Sometimes they’re translated just as they were or perhaps even improved upon, like how Agent 9’s controls have been redone to match modern console shooters, but they often end up becoming much easier or much harder due to a busted camera angle, iffy collision detection, or any number of issues. As a result, the original is the most solidly remade of the three, while Ripto’s Rage and especially YotD are progressively buggier and less dependable in ways the originals never were.

A big part of this likely has to do with the fact that while Toys For Bob were the lead developers, they ended up having to outsource development to many, many other studios to get the remakes completed in the very short time allowed. YOTD‘s remake was created in eight months by Sanzaru Games, the team responsible for the 3DS Sonic Boom games and Sly Cooper: Thieves in Time, while additional development, art and audio duties for all three games were outsourced to 22 studios altogether. This large degree of outsourcing results in a general inconsistency, where some parts of the game work better than others.

The fact that so many teams to get involved to complete the game in time is reflected in both the sudden delay of the game’s release from September to November 2018, and the enormous patch that must be downloaded in order to play Ripto’s Rage and YotD. By default, you can only play the original in its entirety and the opening sections of its sequels, which is dreadful for those with poor internet connections and/or limited storage space on their system of choice. 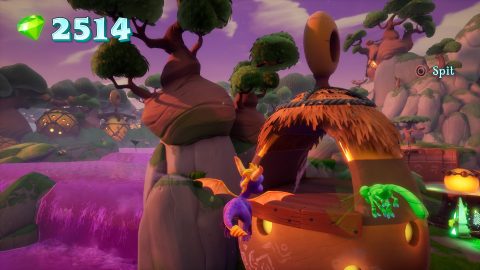 The resulting inconsistencies from all these people working on the game also affects the visuals, which is unfortunate as the core ideas are very solid. Instead of literalizing the originals’ graphics and slapping some current-gen effects on top like other remakes in this style, the team at Toys For Bob sought to take the fairytale aesthetics already present and expand upon them with a greater degree of stylization in its characters and worlds. This direction has plenty of promise, as shown in the fantastic concepts presented by the in-house and freelance artists led by art director Josh Nadelberg and character designer Nicholas Kole, and often executes that potential with aplomb.

Spyro looks pretty excellent, with a very readable model that lends itself well to plenty of appealing expressions no matter what situation he’s in. But this also applies to the character models for the first game, which were always something of a weak spot. Enemies are much easier to read and considerably more expressive now, while every single dragon has a unique model that makes rescuing them much more rewarding. Level designs play into this too, with plenty getting radically different interpretations such as the Beast Makers hub world, or receiving additions that enhance the originals like the blowing snow in Wizard’s Peak or the overpowering eclipse in DrShemp’s world.

However, that aforementioned inconsistency does hold it back too often. Enemy and character designs in the sequels vary greatly between hitting a new look that works and unappealing, sometimes misunderstood executions of middling concepts. Levels often end up losing the clarity and emotional ambiguity of their original counterparts through color palettes that bleed too easily into each other, repetitive and sterile backdrops in the case of YOTD‘s worlds, or an overuse of effects such as bloom, overly detailed grass or colored lighting. One effect that’s particularly upsetting is the use of motion blur, which is too intense even when you’re merely turning the camera. An option has since been patched in to turn it off, though it’s still activated on certain stages and won’t turn off no matter what. 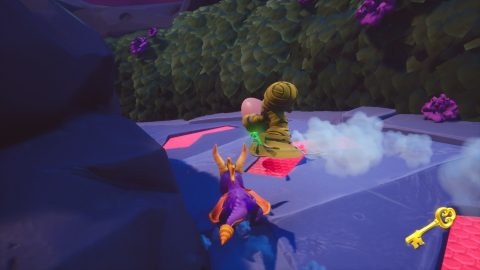 Moving to other aspects of the presentation, the iconic soundtrack has received a comparatively straightforward treatment. The original tracks by Stewart Copeland have been re-recorded by Stephan Vankov to utilize more modern instruments, alongside dynamic music that adds percussion when charging and strips away layers to an ambience when you’re not moving around. It generally works in adding a sense of progression to the music, though they blend too easily into the background due to a lack of punchy instrumentation. You can listen to the original Copeland tracks instead, but they’re also too quiet in their mixing and loop oddly. What’s more subtle is that the majority of the sound effects have been replaced. While some sounds work just as well in their own right such as Spyro’s charging, most of them eschew the originals’ impact for realism.

The voice cast has been almost entirely recast, with the only reprised roles being Tom Kenny as Spyro, Gregg Berger as Ripto, and André Sogliuzzo as Sparx. While full to the brim with experienced and beloved actors, the way they’ve been directed doesn’t complement the scripts well. This also applies to the cutscenes, which have a new soundtrack that drastically changes their tone. Things end up feeling much more emotionally one-note and toothless, and it comes off as talking down to kids in a way that the originals never felt. While the narrative qualities of the sequels still exist, they’re heavily diluted and are perhaps harder to appreciate.

It’s important to emphasize that despite these various criticisms, the Spyro Reignited Trilogy is a perfectly fine way of playing the original PS1 games. It replicates most of their nuances solidly and offers a memorable art direction to go with that, and that can’t be said for every remake in this style. However, due to its many inconsistencies and faults, it’s best to consider it as an alternative to the originals, and not as a replacement.