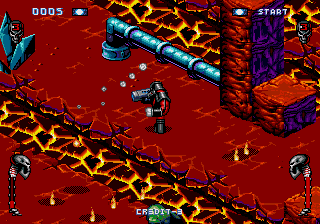 The early 90s were the peak of what could be defined as “The Dark Age of Comics”, a period where everything was retooled in order to appear “darker and grittier”. Violence, sex and coarse language abounded among those who once were clean-cut heroes, everyone had guns, every girl had improbable stripper-ific bodies and outfits, and many had over-the-top names such as “Bloodwulf” and “Deathshot”.

Skeleton Krew was a product of this “dark age”: you play as a team of mercenaries who solve problems by shooting at everything that moves, all characters have laughably edgy names such as “Moribund Kadaver” and the graphics are as dark as it gets.

The story, as narrated in the “komik” inside the manual, begins in the not too distant year of 2062, where the aforementioned Mr. Kadaver, former mortician and leader of DEAD Inc. (Deadly Enforcement Aggressive Destruction), takes control of a cryogenics plant in MonstroCity (former Cryo City) to convert it into a factory that produces the so-called Psykogenix mutants to overrun the land. The only ones who can stop him are a multinational mercenary group called Skeleton Krew, whose members are fittingly nicknamed after skeleton parts: Spine, Rib and Joint. They are bio-mechanical soldiers whose upper body is disjointed from the rest, letting them shoot at almost 36 degrees while standing firmly in place. You can choose one or two of them in a selection screen that looks inspired by Alien Storm and/or Golden Axe, judging by the skulls.

Team leader, American and the oldest member, judging by his “konception” date of 2031. His abilities are balanced and he looks a bit like Eddie on the cover of Iron Maiden’s Somewhere in Time, bald head and all.

Nobody ever chooses British girl Rib, because she’s the typical “fast but frail” character, in a game where speed is useless. She looks like a mix of X-Men‘s Storm and the Female Titan from Attack on Titan.

This Russian bloke is the big, slow, angry guy of the group, unsurprisingly. More durable than the others, has also a bigger torso rotation range, but it is difficult to line him up with the enemies. Joint wields a huge blaster, but he still shoots the same bullets as everyone else. 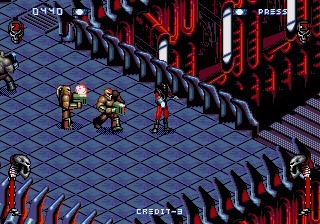 Skeleton Krew is a run-n-gun with an isometric perspective where you have to shoot at everything all the time, and the only weapons are the standard blaster, with infinite bullets, and grenades to throw at the enemies who are too low on the ground, also limitless. There are no other upgrades, in fact there is no other extra stuff period, save for extra lives and money (or “Nu-Bucks” as the manual calls them) lying around, whose only purpose is to let the Krew gain a new life every 10,000 points. The money, however, can also be overlooked since the game is not exactly long – six levels (five in the Amiga version if you don’t count the final boss) with a password system, and the characters have three continues with three lives each, so reaching the end is just a matter of time.

Despite this, at first it can be awkward to progress, because of the controls – the idea of keeping the characters in place and shooting around them by rotating their torsos is novel (torso and legs are two separate sprites) but the controls are a bit counterintuitive and feel confusing most of the time. Plus, there are the usual problems of games with an isometric perspective: you need to be lined with the enemies to hit them, so that even running and shooting feels awkward, the collision detection is sometimes dodgy, and the grenades, with a short range and small blast radius, aren’t all that useful. And in a game where shooting is the only thing to to, this is not for the best.

The degree of interactivity with environments is also very low: at the beginning of the first level in the Mega Drive version there are some columns that can be pushed past by shooting on them, but nothing ever is made of this, and the only other thing that can be done is to (what else?) shoot once a stone slab to use it as a makeshift bridge. Not that anything other than “killing everything” is really needed – even the missions that have a clear objective, that is, not just surviving until the end, need the Krew just to destroy some static generators or something like that, not exactly exciting stuff. The Amiga versions do not even have real bosses at the end of most levels, these stages just end right there, and then the password for the next one is given. 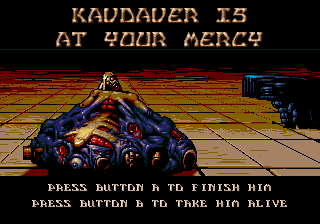 Press Button C to correct the wrong spelling of his name.

Speaking of end bosses, something needs to be said about the final confrontation from the Mega Drive version. At the end of the last level, DEAD headquarters (DEADquarters?), which is missing from the Amiga version, there is an ominous, empty corridor that leads directly to Kadaver, who is… just some guy in a black suit standing still, whose only attack is to conjure blue energy balls. He is, however protected, by force fields that must be removed by shooting at the generators on the walls of the room. When the fields are deactivated Kadaver starts teleporting around the room, with a pretty cool phasing effect, still just shooting those slow spheres. He’s a pushover, and he comically gets blasted through the wall, leaving a human-shaped hole a la Looney Tunes, but just when everything seems to be over, his second form bursts through the background for the last battle. This form wants to be grotesque and unsettling, but is only goofy-looking, and not that hard to defeat. After this, the game asks us a “moral” question, whether we want to murder the bad guy right then and there, or spare his life. Since we did nothing else but shooting at everything up to that point, the answer is obvious, and this part feels forced and edgy for the sake of it, but in line with the cynical attitude of the Dark Age of entertainment products.

The presentation is excellent, though. The graphics are great, with smooth scrolling and awesome use of color. There is a strong influence of comic books of the time, and all levels have a bio-mechanical feel that mixes cold steel and stone with flesh, bones and muscles, reminiscent of things like R-Type and HR Giger’s works while remaining quite distinct and original. Some settings are more surreal than others – never before (and probably after) has Mars been pictured as a world of lava rivers, giant crystals, steam pipes and robotic bipedal frogs (!?). The few bosses are also appropriately fleshy and disturbing (except for the last one) – the enemy mutants however are less original, almost all falling under the “squat humanoid with big guns” template. All art, including box art, is mostly the work of artist James Ryman, who went on to make illustrations for Magic: The Gathering and the World of Warcraft card game. 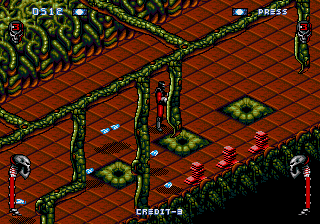 The music is also noteworthy for being both unexpected and very good. 1995 was the period of grunge, but the two versions of the game did not choose rock tunes for its soundtrack, neither metal or heavy stuff, but something very different from both. Martin Iveson’s Amiga soundtrack goes for a jazzy/trip-hop sound, that has aged well and is admittedly cool, but feels a bit out of place with the gameplay and general atmosphere of the game. The real surprise is the Mega Drive soundtrack by Nathan McCree, which can be described as glitchy electronica/dark ambient and not only pushes the console’s audio chip to its limits, but is also excellent and really helps to convey the air of dread, creepiness and overall “bad future” that the graphic artist wanted us to feel.

In the end the game has an outstanding art direction but underneath it there is a very shallow and empty experience, more so in the Amiga version, that feels unfinished. And it probably was, since previews in magazines of the time mention forced scrolling levels on vehicles such as jet skis and tanks, but are absolutely nowhere to be seen. Just like all the planned tie-ins such as actual comic books, toys and T-shirts, since Core apparently hoped to make Skeleton Krew a brand name. The Krew wanted to be the next badasses, but even if the devs wanted to do an “arcade-style” title, without cool power ups, fancy vehicles or big explosions their game is very boring, and the dark and cynical tone now feels tired and laughable, just like the manual that substitutes each and every hard C with a K (Mortal Kombat being already out by three years at that point). Unsurprisingly this is their first and last appearance in the video game world. 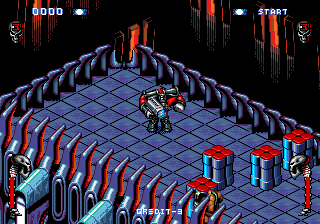 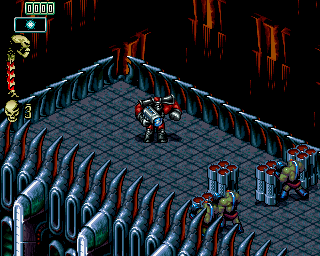