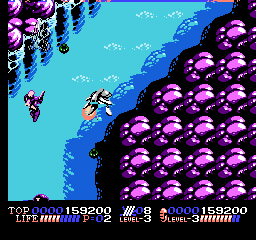 Isometric video games were all the rage in the eighties, what with Q-Bert and Marble Madness being fondly remembered arcade classics and the likes of Sabrewulf and Solstice at home delivering exploration and tough platforming in equal measure. One of the biggest early isometric perspectives, if not the pioneer of the style, was Sega’s Zaxxon, a shoot-em-up that boasted its innovative perspective along with position-tracking shadows and an altitude meter to ensure players wouldn’t unfairly crash into walls. It still happened a lot because Zaxxon was tough, but it was a hit for its time and one would think the isometric shoot-em-up niche would have persisted for some time. This novel concept somehow faded as quickly as it came with extremely few similar games released in the future, like Viewpoint on the Neo-Geo, an early Housemarque PC title named The Reap, and Zaxxon’s Motherbase 2000, a sequel to the original that was one of the very few noteworthy exclusives for the ill-fated Sega Genesis add-on, the 32X. The NES also beheld such a rare game in Isolated Warrior, an obscure title to be sure, but certainly no less known than The Reap.

Isolated Warrior is about the only man left over to fight off an invading horde of aliens with the totally rad name of Max Maverick. The alien invasion plot is exactly like Low-G-Man, except there’s no freezing-and-spearing mechanics in place. All Max has are his gun, his bombs, and an infinite capacity to perpetually shuffle towards the upper-right corner of the screen. Being one of the very few isometric action games on the NES, some cheeky translator likely used the word “Isolated” in the title as a nod to the shared prefix of “Iso-,” where no such pun exists in the Japanese title, Max Warrior: Wakusei Kaigenrei. Anyway, slanted perspective aside, this is your standard run-n-gun like Commando, Ikari Warriors, or Outzone, except you’re always in motion and you have the ability to jump for avoiding projectiles and terrestrial hazards. You can even hold A to prolong the jump with a somersault, cementing Max as a too-cool-for-school nineties hero for all times. 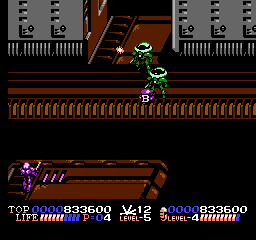 There’s not much to the basic goal of any given level except not dying, blasting and/or avoiding enemies as need be, and roasting the boss at the end. There’s six (actually seven, but more on that later) levels that provide for a relatively fast playtime in the half-hour range, and lives and continues are fairly generous, so most action aficionados can beat the six levels without much strain. Max’s infinite ammo laser firearm is equipped with two modes, a wide shot for hitting enemies at angles and a more powerful straight shot that also fires beams directly behind him. Each one can be powered up five times by collecting their appropriate “W” or “L” icon up to a maximum of twelve. There’s also bombs you can release while jumping that clear out surrounding enemies or deal big damage to bosses. Bomb power increases with the “B” icon, while these floating oval capsules (called “bullets” in the manual for some reason) add to your bomb stock. Other collectibles increase your life and give you shields which last for five hits. You’re usually moving at a breezy-enough pace to collect items easily, but there are two levels where this is not the case.

Stage two has you hovercrafting over the water, leading to a significant speed increase that makes it trickier to grab power-ups. The third stage returns to normalcy, but the fourth has Max on a motorcycle that boosts the pace up to the fastest it ever goes in the whole game. Collecting power-ups is less of an issue than leaping over the newly-introduced death pits, a hazard which persists in the latter half of the game, but it’s at its worst here where the speed spike makes makes precise jumping a chore. Speaking of precision, the hit detection on your shots versus enemies can be fiddly. It’s not so bad when some random alien schmo just floats by you, but this becomes a problem on most bosses where you have to hit a specific weak point. 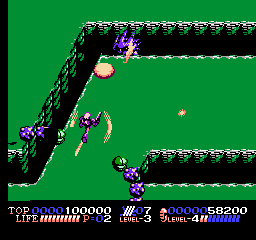 Isolated Warrior is not difficult in a merciless Battletoads or borderline-impossible Recca way, but the perspective makes it hard to connect and avoid enemies. The isometric view is both its most impressive and damning feature, as while it looks pretty neat in tandem with KID’s typically neon-colored palette, it seems like the NES wasn’t entirely built for the gameplay it vies for. At least most of the bosses look pretty rad, the second and third level bosses being particular standouts. The former is what can only be described as a “giant old man crossbred with a naval weapons platform,” and the latter is a delightfully creepy massive alien with bulging eyes and a dubious-looking mouth. In contrast, the boss of the infamous fourth level is an unimpressive small purple floating robot who mostly exists to annoy you until you inevitably fall into a pit.

Now as said before, there are six levels total, but with the caveat that there are actually seven. The seventh truly-actual-final level is the product of a less forgiving time in game development where people who weren’t quite skilled enough might have been unable to see the full game, instead being goaded by an ending try again. In this case, after the pretty simple ending, you’re told that “if you finish all 6 stages before the game is over, you will enter a special stage #7 for highly skilled players.” The message intent is a bit muddled, but it translates into… not dying once over all six stages. Ouch. Stage four can easily kill a perfect run, and even if it’s a short game, there’s nothing more frustrating than a single pitfall rejecting your efforts. Even if you reach the last level, it’s not that much different from the fifth and sixth, although the final boss is a rough finale. He erratically flies around spamming bullets and summoning gigantic missiles you need to leap over despite being in a starry void. 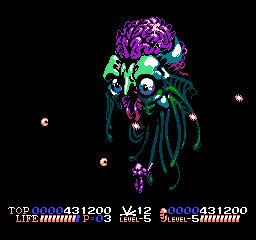 Isolated Warrior deserves some applause for being the only thing of its kind on the NES, but the end product is a bit janky, even if unavoidably so. There was a lot of dumping on level four, but it’s just such a sore thumb in what could have been an otherwise manageable game, almost like the Turbo Tunnel from Battletoads but without the levels afterward being harder. Just that one painful level is almost enough to drop the game’s theoretical rating by a letter grade, along with its imprecise hit detection and final-stage hostage-holding. It’s definitely not the best NES game, let alone the best one made by KID, but it deserves a look for being one of the very few isometric shooting games in the entire world. It wasn’t a very popular genre, but it tried to do something different than the Gradiuses and the Raidens of the time, so spend an afternoon with Max Maverick if you’re a shoot-em-up junkie looking for a fresh perspective.