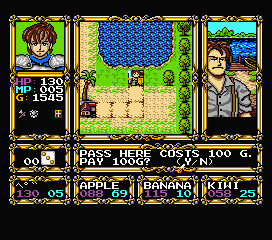 Rune Master is a series of role-playing board games for the MSX2 developed by Compile. Compile had already established itself with a stellar series of shoot-em-ups on the MSX. They would also gain fame with Puyo Puyo, the blob puzzler by company founder Masamitsu “Moo” Niitani. Before Niitani worked on Puyo Puyo, however, he was the producer on Rune Master.

When Compile closed its doors, their licences was bought out by other better standing developers. SEGA acquired the rights to Puyo Puyo and have developed sequels to that series, while most of the other rights went to D4 Enterprise. In 2007, D4 put out a collection set of the Rune Master series through their download service Project EGG. It is only in Japanese and no changes were made to any of the games other than being able to run on Windows.

The first game was released in 1989 as part of Compile’s Disc Station Special Christmas Edition. The Disc Station project was a disk based magazine that Compile would send out featuring trailers, demos, art galleries, developers notes and even fan made games. These magazines became very popular and would eventually expand with several special issues.

Rune Master introduced gamers to a play style that wasn’t very common in RPG video games. It is played on a board with dices that dictate how many blocks you move depending on the number you roll. The board is a rather large world map where treasures, monsters and other events are triggered if you land on a particular square. The interface consists of a number of small windows; the left side shows the character with his states and items, the middle shows the world map and the right side displays either the story events or the enemy stats. On the bottom you get an overview of all the players and their HP.

In order to capture the attention of gamers and tell the story properly, Compile featured the intro to the game in a “Notice Demo” on their Disc Station #7 release. When you start the game, you get a name entry screen and the choice to play as 1 from a total of 4 characters.

An all around heroic fighter. Can comfortably use all items in the game.

A magician and the only playable female character in the game. She can gain more from magic spells than the other characters.

His escape success rate is a bit higher than the other characters and he has the highest HP count.

Gains more from healing items than the other characters in the game.

The remaining individuals are controlled by the CPU unless you choose 4 players, allowing for some early age video game multiplayer action. Sadly, the CPU will drag out time a lot as the AI isn’t very intelligent at all, and for the most part you’ll be sitting there shaking your fist at the clouds in anger because they keep on dying. While the combatants never fight each other directly, they do race against one another to the finish line. The player who gets to the end of the board and defeats the last boss becoming the winner. At your turn, you have the choice of either rolling the dice to move or use an item to replenish health. Depending on where you land, different scenarios can be triggered. You might encounter a random enemy, an NPC in need of help, or fall into a booby trap. Walking down the map, you also encounter churches and towns you can enter. The churches raise luck points for a fee of 300 gold while towns allow to check into an inn to refill all stats or buy weapons, armor and items. With both weapons and armor, you have to buy the weakest alternative before you can upgrade to the strongest option, so if you want the Flame Sword, you first need to have bought at least the Short Sword.

All the events in the game are shown in form of a still picture on the right side of the game frame. Even with the relatively small size of the frame, Compile managed to put a lot of character into these illustrations and they look quite good for an 8-bit game from this era.

Battles are also played with dices. When you begin the game, all you have is the dagger, which gives you one battle dice. You engage in battle and roll a number and depending on the enemy’s armor count, you have to roll high enough to deduct any HP. Say you face a slime which has an armor count of 3, then you would at least have to roll 4 in order to take away 1 HP from him. As you win battles and earn money, you can go to towns and buy new weapons. This gives you more dices and also bonus points, which are always added to the number you rolled. Magic can also be used to allow single-roll bonus points. The game becomes a bit unbalanced quickly as you don’t really have to buy very expensive stuff before you are virtually invincible. As soon as you acquired a weapon and a piece of armor around 500 gold each, which takes 3-4 battles to save up, you’re pretty well off for the rest of the game.

The story isn’t very detailed or well-told. The basic gist told through small bits and pieces in the game tells the story that the Rune Master who lives in the Castle Tower is missing and the land has been filled with monsters. Four warriors set out to reach the castle and rid the land of evil once and for all. Along the way you can also branch out into side missions to earn some extra cash, like saving the king’s daughter from a dragon. When you have crossed the land and fought the many bosses you encounter, you’ll finally get to the Castle Tower and fight the demon, a pink farting frog with a crown. 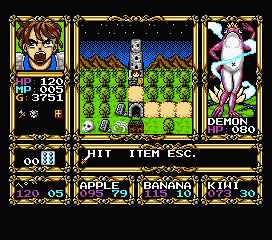 After defeating this vile creature from the depths of hell, the old Rune Master comes to congratulate you, gives your character the Rune Ring and crowns them the new Rune Master, who will protect the land from now on. What’s your price for beating the game however?

This dance. The animation changes depending on the winning character.

It might not be much of an ending, but the game definitely shows some serious potential. The shortcomings soon fall by the wayside, and the style of gameplay leaves a fresh feeling of intrigue about what could be done further if more time and effort was put into the product.

This game, like its sequels, was never officially released in the West. The English versions appeared thanks to a Dutch translation group called OASIS, who were early predecessors of what later became known as fan translation. The translation is a bit dodgy in places and it seems some text was cut out due to space limitations, but for the most part it is quite well done.