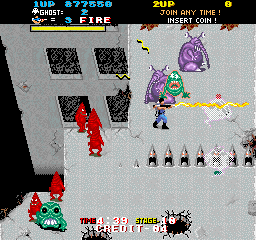 Based on the iconic 1984 comedy movie Ghostbusters, David Crane’s computer game wasn’t the first licensed game, but it was one of the first really good ones. Half action game, half simulation, it put you in the role of running the Ghostbusters as a business, gaining money and buying weapons, all while chasing down and zapping nasties. While this game was relatively famous, being ported to the Atari 2600, Nintendo Entertainment System, and Sega Master System, its follow-up is much less well regarded.

The Real Ghostbusters arcade game was developed not by David Crane, but rather by Data East. It’s a more straightforward run-and-gun action game more suitable to the arcade than the first Ghostbusters title, though it’s not as well known since it was never ported to consoles, only European computers. As the title, cover, and cabinet art indicate, it’s technically a tie-in with The Real Ghostbusters cartoon series, which began airing in 1987. However, there’s no indication of this within the arcade game, as none of the characters actually look like any of the Ghostbusters.

Data East’s game is an oddity because it’s actually a reskinned version of a different Japanese arcade game, Meikyuu Hunter G, which translates to “Labyrinth Hunter G”. Despite some very overt similarities, there are still numerous differences between them.

Unlike most run-and-guns at the time, where the goal was simply to charge forward in a straight line, the levels here are more non-linear, as you need to move left and right to find the path to the exit. They’re not exactly mazes, though, and even if you come across a dead end, you can create a bridge or a ladder by shooting some of the scenery. After defeating the boss, of which there are sometimes several you fight at the same time, you get a key and unlock the door to the next stage. There is no life meter, and one hit will kill you.

The main difference between The Real Ghostbusters and Meikyuu Hunter G lies with the weapon system. In Meikyuu Hunter G, your standard weapon is a gun, which is ineffectual against almost everything. There are a few different weapon power-ups, but they’re infrequent, and disappear very quickly when revealed, making them hard to obtain. The second button fires a cavalcade of bullets in a circle, damaging everything around you. If you hold down both buttons, you’ll activate a laser beam. This is more useful than your main gun, but unfortunately its energy is very limited.

In The Real Ghostbusters, you’re still equipped with a gun, though there are no more extra power-ups. Instead, your laser beam is assigned to the second button, and you have much more energy, making it far more useful. It’s also been upgraded so it looks and acts more like the proton beams from the movie, plus there’s a new power-up which strengthens it even further. A later revision replaces your main gun with the circle fire weapon of Meikyuu Hunter G, and you only use the weak gun when you run out of proton pack energy. In Ghostbusters, Slimer also appears as a power-up, who floats around your character and hurts enemies. There’s also a three-player version of Ghostbusters, whereas Meikyuu Hunter G is two-player only.

Killing an enemy with either weapon will release them from their corporeal body, turning them into ghosts. These are harmless, but the only way to capture them is by using the proton beam. (It’s not exactly accurate to the movie.) At the end of each level there’s a short cinema of your team loading the captured ghosts into a containment unit, granting extra points.

As for the visuals, most of the tiles are the same, and while the levels look similar, they actually have different layouts. Ghostbusters also ends after ten levels, with a quick ending scene, while Meikyuu Hunter G has eight levels that repeat infinitely and get progressively harder. The main character sprites look almost identical, except in Ghostbusters, they also carry around the proton pack. While some of the enemies are the same, including the white-hooded guys that look awfully like Klan members, many of them have been redrawn for Ghostbusters. The new ones have a more comical look that fit in tone with the movie. There’s only a single boring song that plays in Meikyuu Hunter G. In Ghostbusters this has been replaced with Ray Parker’s famous theme, which is well rendered, but grows mindnumbing after hearing it for so many loops.

It’s hard to tell whether Data East developed this game as a Ghostbusters tie-in and then stripped its license for the Japanese release, or if they took some random game and slapped the license onto it. It’s probably the latter case, because Ghostbusters is definitely a more refined game. It’s not exactly exciting, but Meikyuu Hunter G is downright not fun, as you’re constantly overwhelmed by enemies, whereas Ghostbusters is at least playable on the virtue of giving you more powerful weapons.

The Real Ghostbusters was ported to many home computers, published by Activision. The Amiga and Atari ST versions look okay, but have choppy animation and some annoying sound effects. The Commodore 64 version is smoother, but the hit detection is iffy. The Amstrad CPC version has some bad colors and is quite choppy, while the ZX Spectrum is a little smoother and more playable, while being less garish. 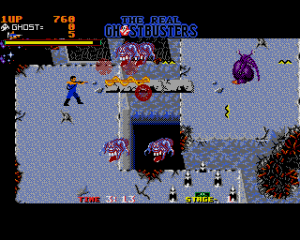 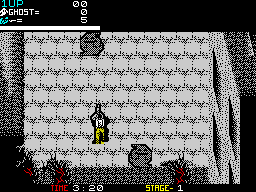