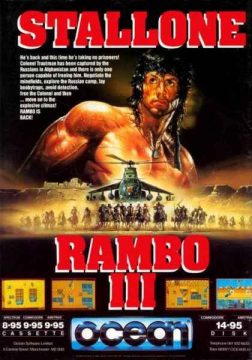 The home computer version of Rambo III is broken up into three segments. The first is an overhead exploration sequence where you need to infiltrate a prison, shuffling through many empty rooms to find the Colonel. The second stage is another overhead level, where you need to plant bombs. These two stages are superficially similar to Metal Gear, in that there are a bunch of nifty items and weapons to find. You start with a set of throwing knives, but eventually get machine guns, arrows, mine detectors, silencers, infrared goggles, and the like. It’s not anything complicated, although there are some notably stupid “puzzles” – one particularly innocent looking door will electrocute you, instantly killing you, unless you know to hit a specific switch. The stages are huge, but also pretty boring and empty. Plus the guards are monstrously stupid. For the most part, they just walk back and forth on their patrolled routes, and fire at you if you cross their line of sight. Your life meter is a bit scary, as it slowly morphs from Rambo’s face into a skull as you take damage. After you complete the first two stages, the third stage is a first person shooter gallery that takes place in a tank. Fairly uninvolving, but fun. 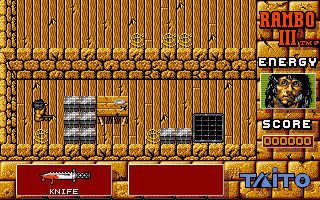 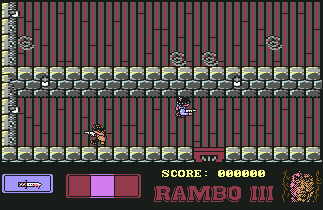 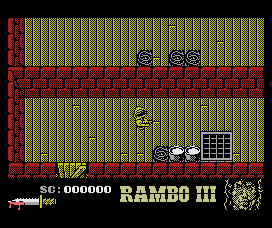