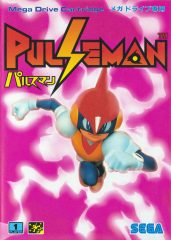 Pulseman is one of the most well-known non-Pokémon titles developed by Game Freak. Set in the 90s take on the early 21st century, the titular superhero Pulseman battles against cyber-terrorism set forth from the Galaxy Gang across the globe. Along the way, he dives in through computer monitors to fight inside virtual reality to rid the dangerous digitized monstrosities.

A special teenager with electrical superpowers. His gift is possibly due to his unique trait of being born from a digitized artificial life form C-Life mother and a human scientist. Being Half C-Life, he’s able to travel between the real and virtual world at will. His Kryptonite is water, since it shorts out his powers within contact.

A young biomathematician and Pulseman’s father. In 1999 he fell in love with a C-Life he created and uploaded himself into cyberspace to be with her, ultimately helping conceive the half-human/half-C-Life hero of the game. His presence is only shown during the backstory cutscene that plays if you don’t start the game immediately.

A mad scientist and leader of the secret society known as the Galaxy Gang, seeking to rule not only the world, but the cosmos. He created a device known as EUREKA, which makes it possible for C-Life to emerge into the real world like Pulseman can. Though it might not be true, it’s possible that Waruyama is actually Yoshiyama gone insane over time while inside cyberspace.

A pure C-Life teen girl that was member the Galaxy Gang – whether of her own volition or not – until Pulseman came into her life. She left the gang to assist our hero at the cost of losing access to EUREKA. Though she’s stuck in the virtual world, she helps out through Pulseman’s communicator with relaying info on the next stage and warning of an incoming boss. She is very concerned about Pulseman and might be something of a girlfriend to him.

Every superhero needs his evil half. Created by Waruyama, Veil is the boss of Stage 5, capable of every attack Pulseman has in his arsenal but with abilities exceeding our red hero. In the end, the battle is Volteccer against Volteccer.

A beautiful news reporter for the RWT satellite broadcasting station. After saving her and the rest of the crew in the studio from a mad member of the Galaxy Gang, she happily reports on the bravery of Pulseman’s story, later following up with a breaking news report at the end of the game.

Pulseman was the first original IP created by Game Freak since Smart Ball, and it doesn’t disappoint. Ken Sugimori’s designs get a chance to shine, giving the game a more grown-up look compared to the rest of the company’s library up to this point. Arriving late in the Genesis’ lifetime, the game is quite capable of delivering a tour-de-force for the console just shy of the earlier-released Gunstar Heroes. Let Pulseman pick up some steam and he can coarse through on an electrifying blast processing clip without any slowdown. While the game doesn’t push for faux-3D effects like Treasure’s grand debut title, all the sprite characters and objects are big and bold without making the screen look too crowded or cramped. The technical showstoppers have to be the virtual realms Pulseman hops in and out of, borrowing multiple many cyberpunk and retro-techno art aspects from TRON, Shadowrun, Neuromancer, Lawnmower Man, and other 80s and 90s renditions of the inner workings of computer space. These worlds range from circuitry layouts, to fake low-poly forests to black voids accented with neon lines. Backgrounds pulse with color and ripple with warping tiles, streaking and pulling these sprites to their limit. It’s obvious that Game Freak knew how to get as much mileage out of the Genesis’ 68000 CPU. 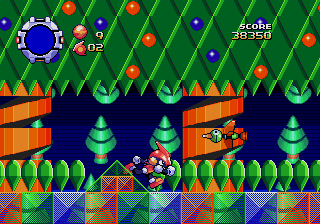 The audio for the game is another welcome treat. With many lesser Genesis titles unable to make more than grating screeches and farting blorps with the FM synth chip, Masuda was able to reign in the music and use its harsh mechanical sound to give the soundtrack a fitting electro vibe with crashing hits and drums with nods to the blippy aural nature of early digi-pop tunes. “Neo Tokyo” serves as Pulseman’s heroic fanfare as it plays multiple times throughout the game, with its leitmotif sprinkled before each mission and during the credits. Another surprise is the amount of voice overs stuffed into the ROM. Though it’s delivered via the standard scratchy low-bit filter the console’s known for, all of the aforementioned main characters (save for Yoshiyama) are quite chatty, whether it’s Pulseman and Veil calling out their attacks, the cackling and over-the-top lines from Waruyama, the calls from Beatrice, and even voiced cutscenes with Lisa Hatfield reporting at the end of Stage 1 and after the Final Boss showdown. All spoken in English, no less.

Being a superhero, Pulseman has a few close combat moves to take down foes. He can belt out a short-range punch, do a ducking low sweep, or a bicycle kick in the air by jumping and holding up. However, his true power comes into play when he’s in his sparking state. With a running startup, performing a Lightning Dash, or collecting a Voltecc Power Up, Pulseman builds a static charge that allows him to fire off electric Slash Arrows. His signature move, the Volteccer, can also be triggered in the air when he’s charged up, volleying swiftly as a ball of kinetic lightning energy that can break blocks and also ride on wires. Provided Pulseman has enough space for a dash and isn’t in contact with water, these power moves can be performed at any point after one charge, which is vital during boss battles. To keep the Volteccer from being overpowering and allowing players to bypass much of the level, plenty of segments, particularly the virtual settings, take place in enclosed spaces that’ll have Pulseman ping-ponging about. Also, flying too high without colliding with an object will cause the Volteccer to run ouf of juice to keep going. This special attack also gets used during the bonus stages between levels, having Pulseman play as the ball in a timed Breakout-style minigame. Along with heart-shaped energy refilling powerups, Spark Balls litter the levels, adding an extra life to Pulseman if he collects 10 of them.

Levels in the game take place around the globe, chosen in sets in any order. Clearing the first three stages unlocks the second trio batch before ending with the 7th and final stage. Each stage itself carries a theme for the specific geographical area, from the neon skyline of Neo Tokyo to Australia’s watery Great Barrier Reef, to USA’s Nevada desert and flashy Las Vegas casinos. The levels stretch in great lengths, having Pulseman hop in-and-out from virtual entries in between sections of the human world. The standout segments involve a queue taken from Gunstar Heroes where players control Pulseman through the lens of Waruyama’s surveillance monitor; and the last stage’s gauntlet taking place inside an arcade machine, complete with a pop-up title screen and HUD with big blocky sprites to traverse. G.G.’s forces a few but varied, usually throwing a couple animal/mechanical being to fly or patrol an area in typical platformer fashion. The bosses serve as the main event, with each big baddie needing a means or evading or using one of Pulseman’s powers to take down.

However, the game’s ambitious nature carries itself to a fault. With everything constructed out of huge tiles and and every character sprite large, there leaves little room to see a threat or a bottomless pit coming. The game rarely forces a blind jump, but tends to encourage some manner or swiftness while also punishing not taking obstacles methodically. With Pulseman only able to take 3 hits, the biggest threat more than anything is mere collision with the enemies of G.G. – especially with knockback sending you into plummeting doom. The Volteccer can easily lead to frustration or to the player’s own undoing, since many areas requiring the maneuver are in such tight quarters, narrow chokepoints, or patrolled by annoying floating water enemy blobs, it’s liable to cause bouts of stress if players are not precise enough. Other times, one wrong Volteccer bounce might careen Pulseman into pits or destroy a vital stepping block, leaving players stuck if they spark out too eagerly. Even hearing Beatrice shout/garble “Be careful!” as you near death is likely to cause ire during boss fights. A calm level-head, steady nerves, and cautious play are necessary to see the game to the end. 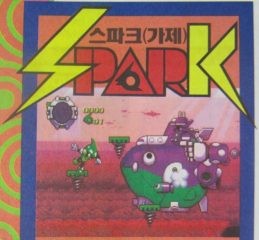 The original title for Pulseman was under the more generic monicker “Spark“, as shown in pre-release info in Japanese gaming magazines. Even with the amount of English dialogue within the game, Pulseman never saw a boxed release outside of Japan. It only saw a brief stint on Sega’s Sega Channel cable broadcast-download service in America in the mid-90s before finally receiving a release 15 years later in the West via the Wii’s Virtual Console. None of the Japanese text was translated, but the game is highly playable without reading the optional backstory cutscene or the level descriptions – the rest of the Japanese text is merely subtitles. The VC release dims the brightness in order to prevent epilepsy in players due to flashing effects used in the game. It also carries the 100 point premium pricing import-exclusives garner via the service. The game influenced many designs and game aspects to the Pokémon series, most notably the rare Electric/Ghost Rotom species based on Pulseman’s appearance and color scheme, plus the special signature move “Volt Tackle” for the Pikachu evo line.

While Pulseman was deemed a one-off, Sugimori has commented on Twitter about returning to the series, either with a revamp or sequel.