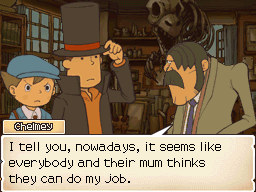 The gameplay is exactly the same as in the first episode: an ADV game presentation where you click on details of the scene to trigger dialogues and, more often than not, puzzles, the kind of brainteasers that you find in children magazines and logic books and such. Overall, there are a few more puzzles than in the first episode (including ones you could unlock using Wi-Fi, unfortunately now inaccessible), and the game is a little bit longer than its predecessor (12-15h vs 10-12h for the first one). One very nice improvement compared to the first one is that the puzzles are much more integrated to the story: while the first one was over-relying on “people around here just like puzzles”, in this game about half of the puzzles make sense within the story and the setting. Nothing too fancy – guessing a password, fixing something that broke, solving a problem with constraints arising from the story, piecing together a photograph, etc – but there was a significant design effort on that point and it feels much better. You’ll still encounter characters that’ll somewhat randomly ask you to solve a puzzle, but much less than in the first one, which makes it less grating and thus more forgivable. 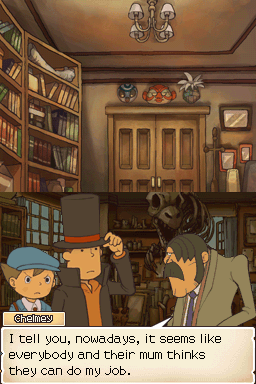 As for the puzzles themselves, they still have a lot of variety, broadly falling in the same categories as before (pure logic, observation/spotting, object manipulation, mathematics, geometry, etc.). Only a handful are old chestnuts (Hanoi towers, knight’s tour), and since they are more tightly integrated in the story, they feel fresher. There are actually a few of them that are exceptional in their framing and/or solution (including the very last one, a delight) and are very memorable, while nothing really stood out in the first game. However, while in the first game the number of picarats each puzzle was worth was very coherent with the difficulty of the puzzle, here there are a few misses, with some easy puzzles worth a lot of points and harder ones worth less. Finally, another difference is that the overall difficulty seems to be lower; most puzzles are worth under 30 picarats, and the hardest is probably around 60, instead of 80 in the first one.

The story in this second installment takes us in the setting of a luxury train and, in the last act of the game, a town that isn’t on any map. Once again, the game culminates to a big reveal and explanation of a mystery that hinges on the supernatural or the implausible. (It is once again a strange choice for a series anchored in the detective genre that requires logical reasoning; Layton literally says to Luke “think rationally, Luke: there is no such thing as ghosts”, when given the plots of these first two games, it wouldn’t seem impossible.) Don’t expect to piece the mystery together yourself, as it relies on logical jumps and elements that you will not anticipate and do not even answer all of the questions. In fact, if you take a step back, there are several inconsistencies in the plotline, some of which seem there just to try to create more mystery and some cliffhangers to try to hook the player into continuing; you’re expected to just let the story carry you. A bit too much, once again – a lot of time, Layton and Luke wander around without really knowing what they’re looking for, waiting for the next plot point to fall on their lap (their motivation being Layton’s intuition, which always tells him they’re close to finding something important, which is rather lazy). Perhaps in order to counter that sense of aimlessness, that was already present in the first game, the game now periodically spells out what your next goal is, pausing the game to tell you something like “Layton and Luke now decide to find the mayor”; a good idea in theory, but in practice it often highlights how passive the characters need to be for the story’s purposes. There are a few groan-inducing moments (like when they ask you to find 15 pieces of a picture scattered around on the map), but overall the plot has its good moments and it is rather easy to just let it unfurl, as expected of you. 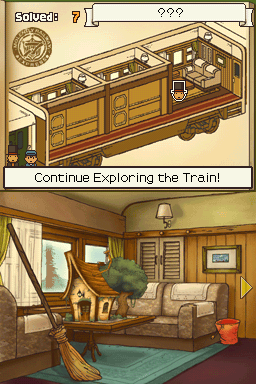 What the game lacks in coherence, it makes up with atmosphere – and here again, the production values of the game and its keen sense of setting shines. The first part of the story is set on a luxury train, which fits the “vintage European gentleman” atmosphere very well; the train then stops at a charming bucolic village, which is also nicely done. But the most interesting and atmospheric part is the last half of the game, in Folsense; the setting is a colorful, brightly illuminated city in the night, as if the city never slept. There are small cobblestone streets, European-style wooden houses, but also colorful strings of lights and Art Deco buildings, which are very pretty and refreshing. (It is odd, however, that no character comments on how beautiful the city is.) The music is once again very effective, with a bit more variety (but still lots of accordion); the music you hear while solving the puzzles is a reinterpretation of the one in the first one, and still doesn’t feel stale, while the music during the minigames (which was awful in the first one) is now enjoyable. There is also still animated sequences, and quite a bit more dubbed lines; Luke is interpreted by a different person (at least in the PAL version), which is at first a bit grating, but the rest of the dubbing is mostly good, although far from the most subtle acting – which fits the game’s story. Interestingly (perhaps because of space issues), there is however a distinctly audible decreased quality/fidelity in the voice samples; in particular, the lines delivered by Layton and Luke when solving a puzzle sound like recorded over the phone, while they were clear in the first game.

Due to the difference in structure compared to the first game (people in the train go from town to town), there are more characters to encounter, but there’s also a stronger core of characters who are relevant to the story. The design of the characters is overall better than the first games, with expressive sprites that are a bit exaggerated but overall on the realistic side; they overall fit together much better (you at last have the impression they were all drawn by the same artist). The characters don’t exhibit much depth or growth, which is fine, as that is not what the game or the story try to achieve; the characters are written in a slightly over-the-top fashion and carry the story forward. Layton, in particular, is just supposed to be the perfect gentleman, and does little more than smile politely and tell Luke how to behave, which doesn’t make for a great character (“Luke, gentlemen don’t show emotions in front of a lady!” isn’t an amazing life lesson). Lastly on the topic of characters, it seems important to mention the game is unfortunately overtly fatphobic in a couple of instances. One character in the train is a bad caricature and there are some pretty offensive lines from Luke then; and the first mini-game’s premise (with the hamster) is a very bad framing of a rather simple puzzle, and its execution isn’t much better (with some very cringe-worthy lines inexplicably delivered by a hamster with a sort of Italian accent?). 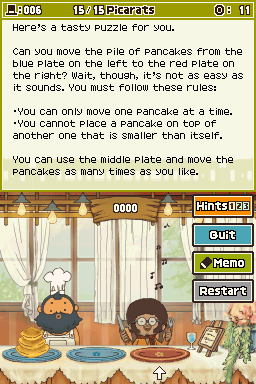 Aside from the hamster mini-game, the other two mini-games are a jigsaw puzzle involving a camera – much harder than the jigsaw puzzle in the first game -, and a very interesting mini-game relying on making cups of tea. The concept of that one has promise (you collect ingredients and make tea using them, mixing the different properties together; each villager will ask you for a different overall effect), but its execution could have been better: any combination that doesn’t correspond to one of the dozen teas you can make gives you a 20 second generic (though randomized) unskippable conversation between Layton and Luke. This along with the fact there are 1000 possible combinations means you will not try to mix and create your own teas on your own; you’ll just wait until you stumble upon a villager that will spell out, in thinly veiled terms, the recipe that they want. What could have been an interesting alchemy minigame is instead a “follow the recipe” game, which is a shame.

In the end, Professor Layton and the Diabolical Box is an inspired sequel, not without its flaws, but that brings interesting improvements to the gameplay, cements the series’ tone (for better and for worse), and gives puzzles that overall feel fresh and inspired, both thanks to the fact that they seem a bit more original and are better integrated to the story. This makes the game just as good if not better than the first one, although you’re unlikely to be swayed by this one if you didn’t like the first one.