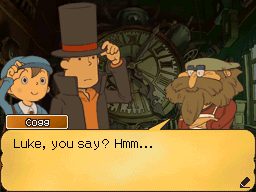 Professor Layton and the Unwound Future for the Nintendo DS is the last game of the original Layton trilogy (though there is a fourth one, a prequel, on the DS). For this game, Level-5 put out the big guns in order to finish this trilogy with a bang; it was well reviewed by critics, although the writing and the narrative have problems that prevent the game from fulfilling its goals.

First, let’s start with the audiovisual department; the game’s presentation has been very good from the start, and this episode introduces tweaks to the engine (while the previous episode didn’t change anything compared to the first one) that really improve the experience. The descriptions when clicking on an object are easier to read and don’t just show up in the middle of the screen; the game doesn’t fade to black before a dialogue scene but instead fades the characters in the foreground; the characters are more dynamic and can move during a conversation for added effect. The FMVs are plentiful, in much greater number than the other games; they are longer and some have very neat graphical elements. The sound design and music are still top-notch, and even if the music you hear during the puzzles has changed, it’s still a nice theme that doesn’t get old even after solving dozens of puzzles. The locations are still very nicely drawn, though on the safe and realistic side (compared to the second opus), and they look nothing like the architecture of London even though the game is set there – which you might not care about, especially since the same can be said of the first two episodes. As for the characters themselves, they are drawn more in the style of the first game than the second game – that is, leaning heavily on caricature and striking features with odd-looking faces and a variety of styles. 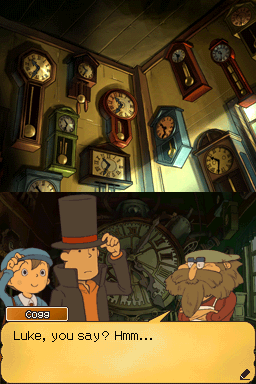 The game also boasts the highest number (165) of puzzles so far. Overall, they are a bit easier than in the first two episodes, especially in the endgame; the picarats scoring is once again a bit inaccurate, and tends to overestimate the difficulty, meaning that the “60 to 80” picarats of the endgame are actually not too bad. However, the puzzles shine, and may be the best offering in the series so far: the old chestnuts (like matchsticks) are gone, as the series of samey puzzles with increasing difficulty, and there are fewer sliding puzzles than in the second game, to some reviewers’ delight. Although classical pure logic puzzles are plentiful, there is a lot of variety, and a very large number of puzzles utilizing the touchscreen in various settings; lots of different devices with intricate rules and original conceits, which is overall very pleasant. The game also adds super hints (which cost two hint coins but basically spell the solution out), and the memo function has been improved, giving you the ability to write notes in different colors and erase only part of the screen. Finally, as usual, there are three mini-games: one based on a sticker book that is simple but refreshing; one based on guiding a car through a map, very logical and pretty challenging; and one with a delivery parrot on trampolines that is probably the hardest minigame of the series. Overall these mini-games are all very satisfying, making them the best trio of the series so far; and since the puzzles themselves are so varied, puzzle-lovers should really appreciate this game.

Note however that the game takes a very big step back as for the integration of puzzles in the story. While the second episode succeeded in integrating most of its puzzles in the story, and the first one used the narrative conceit of a town tourists know for the local puzzle tradition, this third opus just opts out of it. You might not care about it, but it can be grating (“I’m so mad that I can’t solve this puzzle!” says someone for the 20th time in the series) or even cringe-inducing (“Luke, let me tell you a puzzle to pass time while you pick up this banana peel”, or even worse, “As I swam to safety, away from the bad guys chasing me, I thought of a puzzle”).

This ties in with the writing, which overall isn’t as good as the previous two episodes (who have their problems too). In the beginning of the game, you get a letter from ten years into the future from Luke, asking you for help since his London has fallen into a dystopia. It is an interesting idea, but there is a lot of information dumped in the first hour (and only a dozen puzzles), so much that there is even a travelling scene that is there purely to recap the information so far. But despite this, the plot is slow as molasses, and deliberately, it seems, which is all the more infuriating. The game very obviously dodges crucial information for up to two or three hours by having Layton not ask the obvious questions, or by having other characters speak in a deliberately obtuse way or keep secrets from Layton for no reason whatsoever (“I could tell you.. but you’ll find out soon enough!”). This is frustrating and doesn’t help engage the player, as everything presented in the first two hours is pedestrian and not that exciting. 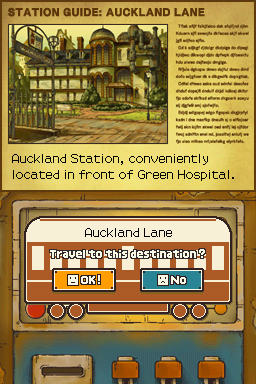 The game does eventually pick up the pace, and at the 7-8 hour mark, you are about to enter a tower full of challenging puzzles, echoing the first game’s final sequence, and most of the traditional “ten mysteries” have been solved. This is, however, far from the end: the game kicks into high gear for a final sequence full of twists and turns, lasting roughly three hours. Layton gets captured, then escapes, there’s another structure to infiltrate, then another one; the game tries to outdo itself to present a satisfying finale, with lots of FMV action and danger. A few of the mysteries get revisited and their status goes from “solved” to “the full story”, which is a nice touch; the structure mostly works to build towards a big finale, and the puzzles aren’t too hard so the sense of suspense is still there. As always, don’t expect a fully logical and coherent story; there’s some last-minute fantastical elements thrown in for emotional payoff, as always with the series, but it isn’t really a big deal.

But it is a more emotional game, with people saying they cry at the ending. Without spoiling anything, the story goes into the past of Professor Layton and his archrival Don Paolo, including an origin story of how and when Layton got his trademark top hat (his previous hat, shown in flashback scenes, is positively hilarious). Learning more about the characters and deepening their relationships is nice, and Layton shows emotion (cries) for the first time. However, for that payoff to fully work, you have to actually care about the characters. The main problem is that Layton is still not a very likeable character, and this episode only aggravates this. While the previous two episodes were establishing him as an amicable old-style polite smartypants who is a bit too smooth to really be that interesting, here he is more stoic, gruff, sexist, unkind, lies to his friends and manipulates them, wields a gun, knocks people out, and drives the Laytonmobile in action-packed sequences. The contrast is never addressed, as if it was his usual behavior; this actually ties in with the fact that the whole tone of the game is more gritty, less relaxed and carefree than the first two episodes, which were a warm cup of tea with a good heart. There’s big threatening bad guys and their minions (all toothless, as they all say a variation on “the boss says i can’t touch you” or “you’ll pay! Take this hard puzzle!”); there’s rabbit torture, a talking bug who gets killed for no reason, destruction at a huge scale, machineguns, etc. The writing, however, is still relaxed and goofy, and none of the characters really lose their composure, which makes the gritty moments all the more jarring when they happen (and disappear just as quickly); it feels like the writing team was torn between keeping the usual tone and making the game more serious for the last part of the trilogy. 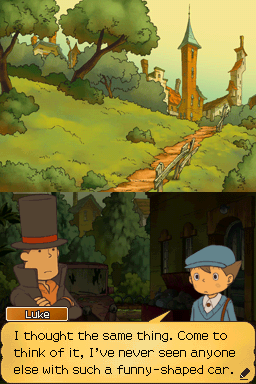 In any case, this third episode of the trilogy probably has the most original puzzles of the three, and might provide the best puzzling experience so far, which is a strong selling point for people interested in the series. On the other hand, even if the writing and story have never been Layton’s strength (and some players might just not care), it is definitely a step down in this episode; it starts slow, makes Layton’s character less likeable, and ultimately doesn’t quite achieve the emotional payoff it set for its goal.

Professor Layton and the Diabolical Box