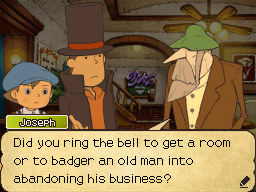 Professor Layton and the Last Specter (or and the Specter’s Call in Europe) is the fourth game in four years in the Layton series, and the beginning of a new trilogy. Instead of being set after the first trilogy, the series goes back in time: what is told here is the story of how Layton met Luke, and their first case together, along with Layton’s assistant Emily Altava. By now the series has settled into a familiar routine, with no changes to its gameplay and writing style, just the goal of keeping the formula humming and the fans happy. However, just because the formula is the same doesn’t mean it is badly done; in fact, here, there is enough polish and quality to call it a strong episode that will fulfill the fans’ expectations and more.

The story is set in the charming village of Misthallery, whose mayor is Luke’s father, and the hook for this episode is that we get to see how Luke and Layton first met. The scene where they meet is actually quite well done, with Layton showing kindness and empathy to get Luke to open up and come along. Luke, Layton, and Emily then go about the investigation of a Specter that destroys buildings in Misthallery. The trio’s interactions with Misthallery’s inhabitants are sometimes awkward: sometimes Layton and Emily ask questions to inhabitants that would be easily answered by Luke, a local resident, and the residents seem oblivious to his presence; and other times some things Luke knows and could explain are left unspoken for no particular reason. That will only bother you if you care about the plot being logical and not contrived, of course – and if you’ve played previous episodes, you know what to expect. But if you expect to see Luke and Layton’s relationship be explored and to watch it grow, you may be disappointed: apart from the first scene, and maybe a later scene about the Specter tearing the community apart, there’s not much here to see in terms of warmth or bonds between characters. Same for Emily; while Luke in the original trilogy wanted to learn to be like Layton, here Emily solves puzzles for no particular reason, and Layton doesn’t seem to be a mentor to her, and in fact seems rather unbothered by her presence. She does, help Luke and Layton with her agility and martial arts background, which adds new skills to the trio and make her very useful, so it’s not like she is an afterthought – and the series so far has lacked in interesting in competent women, so overall Emily is a nice addition to the cast. 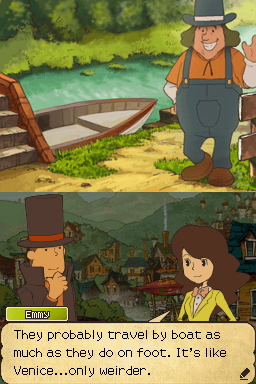 As for the plot, it is standard Layton fare, with around 11 hours of play time, some supernatural mystery solved with an unguessable supernatural twist, and a villain at the end – a new one, that we expect to learn more about in the next few episodes. The game’s ending is bittersweet at best, with a main character getting a resolution of their arc in melodramatic (some might say ham-fisted) fashion. The village is still full of a very wide range of slightly over-the-top characters, and as always they will have a lot of puzzles for you with little justification. The local police isn’t Chelmey and Barton, and actually is consistently hinted at as being a source of malfeasance, which is an interesting switch in tone for the series. Another highlight of the village is the Black Market, whose nature is shadowy but ultimately pretty fun. And for the first time in the series, unlockable “episodes”, two-minute-long scenes that can be watched any time, give a bit of background on characters and a little comedy; however, the writing is hit-or-miss, with some of the episodes not being particularly interesting.

On the puzzle side, the box claims, as always, even more puzzles than previous episodes; around 170 puzzles, with less than a dozen being sliding block puzzles. As in episode 3, around 80% of them are not integrated in the story, and are just a character or Layton wanting to show a puzzle. The one notable exception is the end sequence, which once again works very well, with half a dozen puzzles integrated in a sort of “fight scene” with suspenseful music – perhaps inspired by the last episode, which had similar suspenseful sequences. There is overall very good variety among the puzzles; in particular, the harder (45-60 picarats) puzzles often have particularly original and very satisfying mechanics. There is also a new framing for some puzzles: on a dozen occasions, a puzzle will present itself that is directly relevant to the story, cannot be skipped, and hint coins cannot be used; you have to solve the puzzle to progress in the story. This is a very interesting proposition, as the puzzles then feel special and well-integrated to the story. Unfortunately, this mechanic feels underutilized and not exploited to its full potential; aside from the fact there are so few of them, there’s also not much diversity as about half of them are actually multiple choice quizzes with Layton. But these quizzes are actually very interesting too from a narrative standpoint, as they are used in moments where Layton has figured out something important and walks you through it. This makes things more interactive than Layton dumping information in a conversation, and it rewards you paying attention to the story. To finish on the topic of puzzles, you have 3 mini-games that are almost exact copies of the mini-games in the third episode (train tracks instead of cars, fish instead of parrot, puppet theatre instead of storybook), and some things to collect by tapping repeatedly on odd parts of the location (which can give you an object instead of always a hidden puzzle, like in previous games). The coins are still plentiful, and the super hints are back. 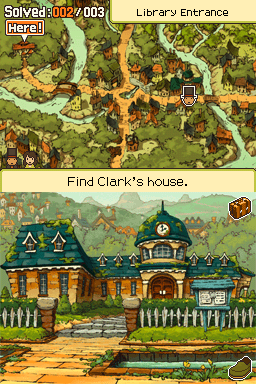 In the audiovisual department, the usual Layton style and production values provide a very nice and comfortable experience. The village itself is, again, typical of mainland Europe (as opposed to Britain), leaning towards alpine cities like Chambéry and Geneva, with a dam and canals in the cobblestone streets. The characters are once again drawn in a mostly consistent style, with the odd bulging eyes; they move during dialogues in the same way as in the third episode, which adds dynamism, and quite a few important story beats have voice acting. There are overall a good number of cutscenes, comparable to the previous episode, although with fewer special effects. The soundtrack, finally, is actually excellent, low tempo but with a variety of atmospheres; a lot of players liked it, not least because there are fewer tracks where the accordion is front and center.

Overall, this is a very strong start for this new trilogy, and Level-5 has definitely put just as much effort and polish to make this episode shine. Whether it’s the quality of the soundtrack or of the puzzles, and the little improvements, there’s plenty to like for fans of the series, who don’t mind the series once again sticking to its canvas, flaws be damned.

The cartridge also comes with a special game mode in Japan and North America (not Europe, as the localization needs would have been too great). This mode is called London Life, and is appealing to fans of the series, who might enjoy the prospect of spending time with all of the series characters, from all four episodes. It promises over 200 hours of RPG gameplay; this might be technically correct, but honestly most players (depending on age or if you are a completionist, perhaps) will probably give up before the end. This game mode feels heavily inspired by Animal Crossing (whose Wild World was a big success on the DS a couple years prior), but with 16-bit inspired 2D graphics. Your customizable character lives in Little London; you have to manage your happiness (health bar), money, and statistics attached to your clothing. There are a variety of things to collect and level up: flowers, fish, recipes, objects, characters, etc. A few jobs are available, in the form of recurring tasks that bring you happiness and money; there are also around 250 one-time quests, or “happenings”, that you can fulfill for characters, who will give you money or sometimes objects. Money can be spent on clothes, to increase your Coolness, Impression, and Formality levels – the latter being particularly important (it’s a Layton game after all…) as it gates your progression, since quite a few locations and businesses have minimum Formality requirements to enter. Money can also be spent on objects for your room, to unlock some features (like cooking recipes to make objects) or to get roommates and keep them living with you. 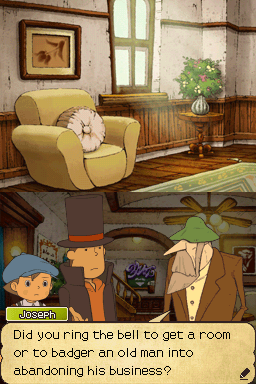 So, yes, if you want to collect all the flowers, fish, recipes, characters, complete all happenings, max out your clothing statistics, unlock the best house, etc., there probably is 200 hours of gameplay. The question then becomes: do you want to? Here, a lot of content unfortunately just means a lot of grinding. There is a lot to buy, so you just have to replay the same mini-games over and over, or fulfill an umpteeth fetch quest (talking to a character at the other side of town); and there are only 6 quests per day, although you can sleep to make time pass faster. That, and the other forms of gating like Formality levels, make it a slow grind through the game. Furthermore, the game suffers from the comparison with Animal Crossing in terms of liveliness of the game world. While on Animal Crossing other characters have different conversations, and you can send them letters or see them wander about town, here they are mostly static and say the same thing over and over, unless you unlocked a quest for them. Even if Layton’s world is full of peculiar characters that you’d like to spend time around, the lack of liveliness and dialogue really exposes the mechanics of the game, which are just grinding for more objects and collecting more random drops; this becomes frustrating and repetitive quickly, making London Life hard to recommend.

Professor Layton and the Diabolical Box

Professor Layton and the Unwound Future