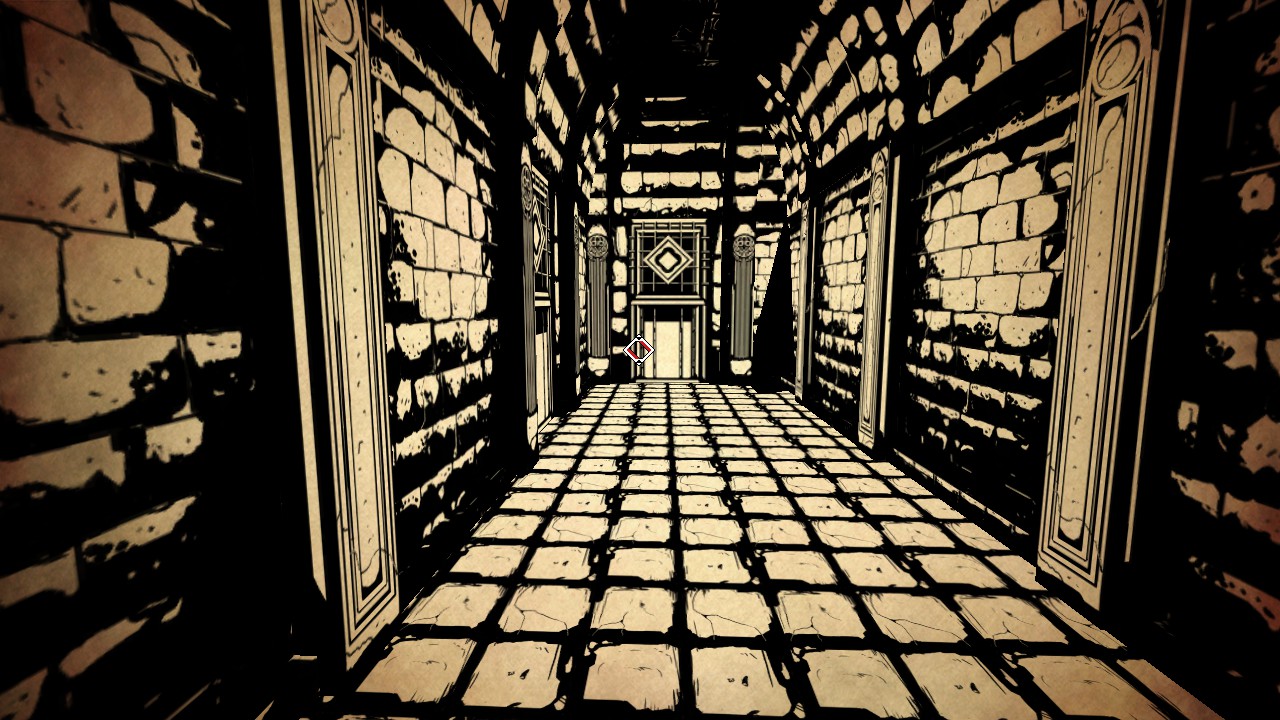 Paper Sorcerer is a heartfelt homage to old-school RPGs, both the pen-and-paper ones and the turn-based computer games. It can be described as a game in the vein of Wizardry, especially the fourth chapter of the series, but luckily not so absurdly difficult. It was made with the Unity engine by Ultra Runaway Games, which is actually just one person, Jesse Gallagher, who is responsible for almost everything including the striking style of the visuals.

The game opens with a simple, fairytale-like animation showing a party of four heroes sealing a powerful evil sorcerer inside a magical book, the Librum Claustrum (actual Latin should read “Liber Claustrum”, but whatever). The rest of the game focuses on the unnamed sorcerer, the player character, and his escape from this mystical prison. For this, the sorcerer (by default a man who looks a bit like Elric of Melniboné, but there’s also a female option with only cosmetic differences) has a few allies on his side. One is the Spirit of the Book, who helps him escape the Librum for reasons that will become clearer the further he delves into the dungeons. The others are his former minions, every one of them based on a RPG mainstay, both as classes and as random encounters: the Goblin is a fast and sneaky thief, the Minotaur acts as a barbarian/tank, the Cultist is the healer/cleric, and so on. 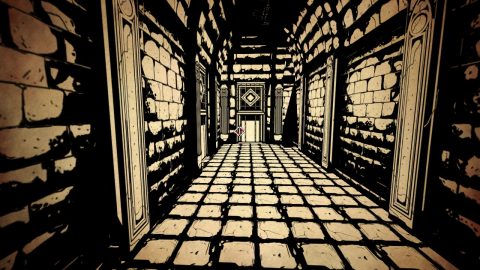 There are a dozen of them, but only a few can be chosen and recruited at certain points during the adventure. The party always comprises the sorcerer plus three other characters, and luckily the player has total control over every one of them. At one point the sorcerer finds a puppet that can be recruited as well, but it acts differently from other minions in that it can’t learn spells by levelling and can’t use normal equipment. Instead it has to be given new sets of heads, bodies and limbs to gain new powers and abilities. This is one of the most interesting and original features in the game.

The main goal is simple: Explore the various floors of the huge prison inside the book, each one housing several regular enemies (mostly adventurers, just like in Wizardry IV) plus one boss who protects the bindings that keep the Librum together. Destroy the bindings in each one of the floors to break the spell and free yourself and all the baddies kept inside. There are only a few concessions to modernity: You can save whenever, the movement in the dungeons is free and not grid-based, and the game is controlled via mouse and WASD keys; everything else is lifted straight from the glorious days of the past. The turn-based fight sequences are identical to most old-style RPGs, with a separate screen showing the enemy group and your party’s stats, with characters only shown from behind while attacking.

From the dungeon view, the random encounters are displayed in an interesting way, as swirling clouds of black smoke, so that you know that they are there, but not who will actually attack you. But in a few areas enemies will also engage you in a fight without prior warning. 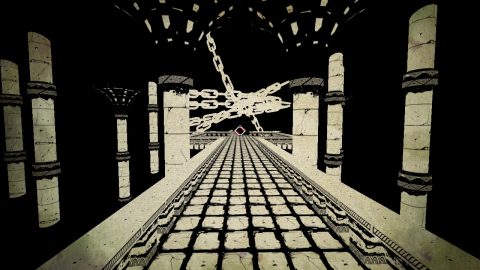 After beating the first boss, the sorcerer gains access to the Sanctuary, a hub where he and his cohorts can rest and buy equipment from a zombie, or raise their stats by paying a demonic trainer. The Sanctuary also houses a mysterious character (pretty heavily implied to be the Grim Reaper) who will reward the sorcerer by opening a level of the catacombs every time you bring him the escaped souls that can be found somewhere in hidden areas of the dungeons. The catacombs are full of treasures and powerful equipment, but also more combat-heavy than the regular dungeons. Expect to be ambushed often. On the other hand you can use the catacombs to grind and gain some extra levels, as the number of encounters in the dungeons are finite.

The combat system is fairly tactical: You have to pay attention to the order in which our party members are attacking and to the Defense (which gets depleted before the HP) and Energy (mana, basically) stats. Spells can’t be spammed but have a cooldown time, and the healing abilities can also be used outside of combat. There are only four types of offensive magic (arcane and divine spells a la Dungeons & Dragons, plus fire and ice-based attacks). On one hand it all seems quite simple, but that also means there aren’t impossibly convoluted elemental rock-paper-scissor games, so it’s more a matter of personal preferences. The simplicity of this system is also reflected in the fact that the characters’ growth is predetermined and you can’t choose any spells or abilities.

The progression of the characters is almost exponential: They gain a bunch of new powerful abilities at high levels, making early floors feel much harder than the later game, save for the final gauntlet of levels. This is even more so if you grind in the catacombs and use some tricks like saving and reloading before picking up any item (loot is randomly generated, so you could either pick up some rags or a Mithril Mace of Doom +50). The game feels a bit unbalanced as a result, and this leads to strange situations like finding some of the bosses much easier than high-level random encounters, who can wipe out our entire party in a couple of turns. And this even includes the encounters with the four legendary heroes who sealed the sorcerer in the first place! Come to think of it, why would they even be inside the very same trap they sealed their archenemy in? 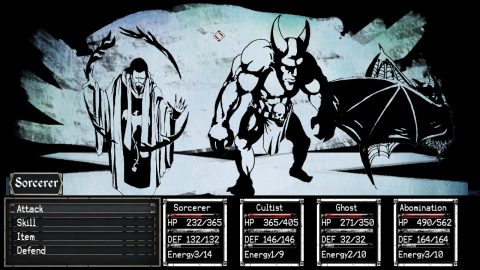 The game’s main point of interest are the original and effective graphics: Elegant in their chiaroscuro, they convey the idea of a world entirely made of paper, while also being reminiscent of the artwork from all those player manuals of old. The various opponents and friendly creatures look like they escaped from a 1980s monster manual as well, and actually come from high resolution scanned ink-on-paper pictures.

Unfortunately, the game is about 90% dungeons and catacombs, so it becomes repetitive after a while, with many identical-looking corridors that only have a different hue. Additionally, the fourth level of each block, AKA the boss room, is always the same in every level, with the giant magic bindings on the horizon quickly becoming a tired visual after the initial surprise. On the positive side, the very few parts set outside become even more striking as a result, being surrounded by an inky black sky that is probably actually magical ink is a stunning sight.

The text-only menus look and feel like in early PC games, maybe a bit too much: sometimes the simple act of equipping new armor and weapons via the mouse can feel impractical, and their statistics aren’t clearly displayed either. The texts are also plagued by typos and other mistakes.

Speaking of texts, the plot unfolds by reading several journals and diaries found everywhere, which give insight to the nature of the Librum, the past lives of the Spirit of the Book and the sorcerer, as well as their real identities. There are a couple of interesting twists, but all in all the story isn’t so compelling, especially since the sorcerer and his minions are just extensions of the player and have no personality to speak of, and there’s even the dreaded info-dump at the end. Also, every single dialogue tree is only there for show, since the main plot is railroaded. 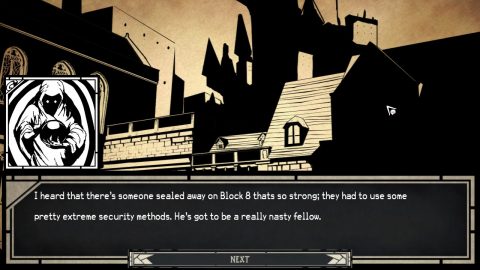 Paper Sorcerer would like to be an epic tale of trust, love and treason, told by slowly piecing together the plot puzzle pieces, but it can’t really reach that goal, especially since the general tone is undecided between being serious and goofy. There are a few comedic situations, such as the running gag of the zombie shopkeeper resorting to increasingly zany methods to attract customers, and the “wacky” final cinematic doesn’t help matters.

The music suffers from the same out-of-place feeling: The various BGMs are strange, moody electronic tracks that would seem more at home in an indie puzzle game or shoot-’em-up rather than in a fantasy dungeon crawler. They’re not too bad, but can detract from the overall experience. Sound effects are your usual ZAPs and OOFs that barely register any more after a while.

Anyway, this doesn’t mean that the game is a disaster or plain bad. Sure, it’s rather unpolished and buggy at times, but this can be excused by the fact that it was made by only one person with no prior programming experience. To the author’s credit, he is still fixing errors and mistakes at the time of this writing, and is also working on an Android port. It looks beautiful, plays well enough, there are several secrets to keep players occupied and for the fans of old-school CRPGs it’s as good as it gets, since these titles could get repetitive as well. Let’s hope that Mr. Gallagher makes good use of this developing experience in his future projects.