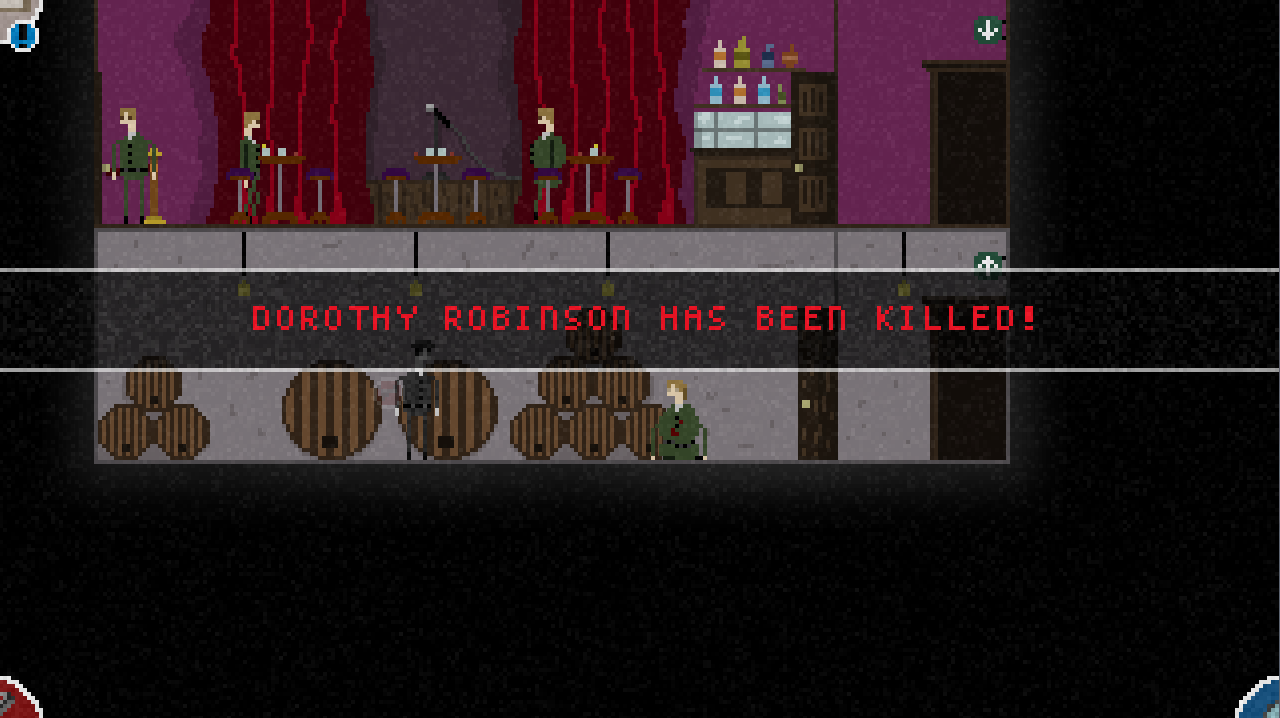 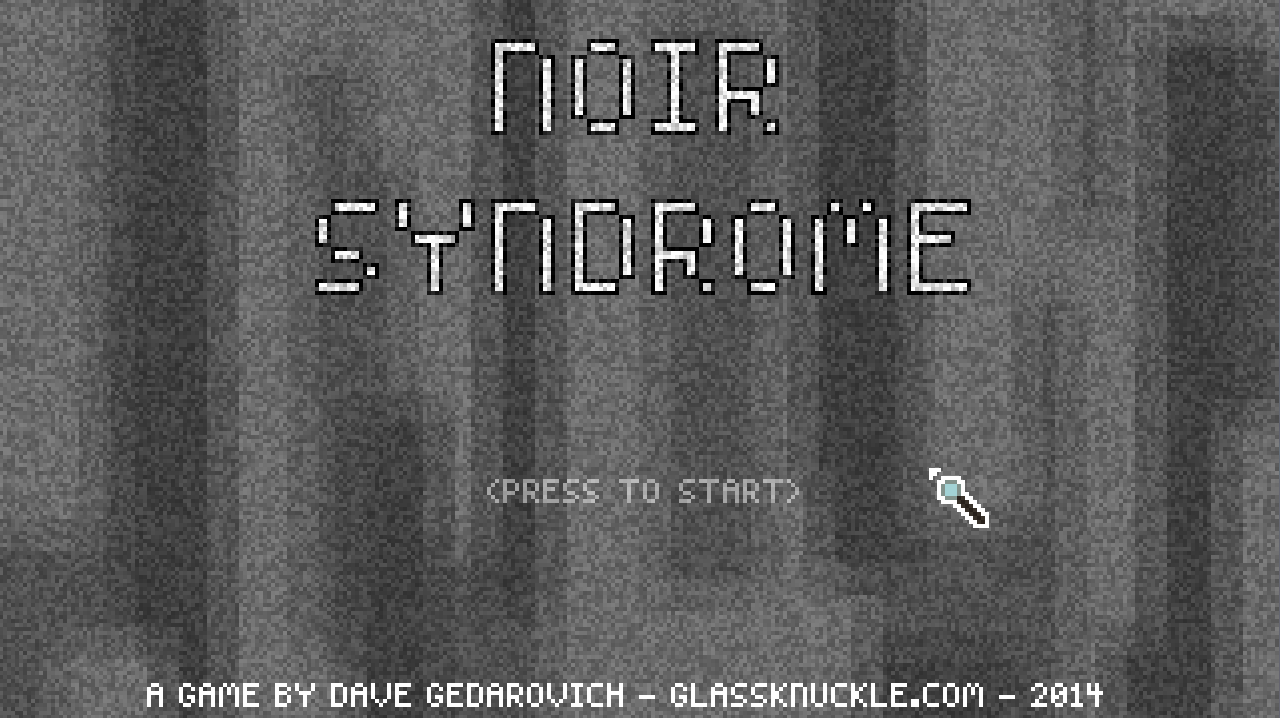 Indie developers are constantly looking for two things; a game they can make in a timely manner, and a concept that catches attention for being so odd. They usually accomplish these two goals by picking some random concept and put it in a roguelike skin, or by taking established roguelike concepts from other games and adding a new spin to the gameplay. Noir Syndrome is very much in the first category, but it’s one of those cases where the roguelike elements actually benefits the concept; detective murder mystery noir.

The best way to describe Noir Syndrome is by comparing it to “Mafia,” a popular game played both with people in person and on web forums. A small number of players are the mafia, and there may be a serial killer or another third party around. Everyone else must track down the bad guys before they gain a majority in lynch voting, while the cop or detective usually can investigate players for information to track down culprits. Noir Syndrome is like a game of Mafia with just the third party from the detective’s perspective. At any moment, the town, police or mafia could become your enemy, and people keep dying as this killer named Anubis picks off more citizens. The goal is to survive long enough to find your suspect. 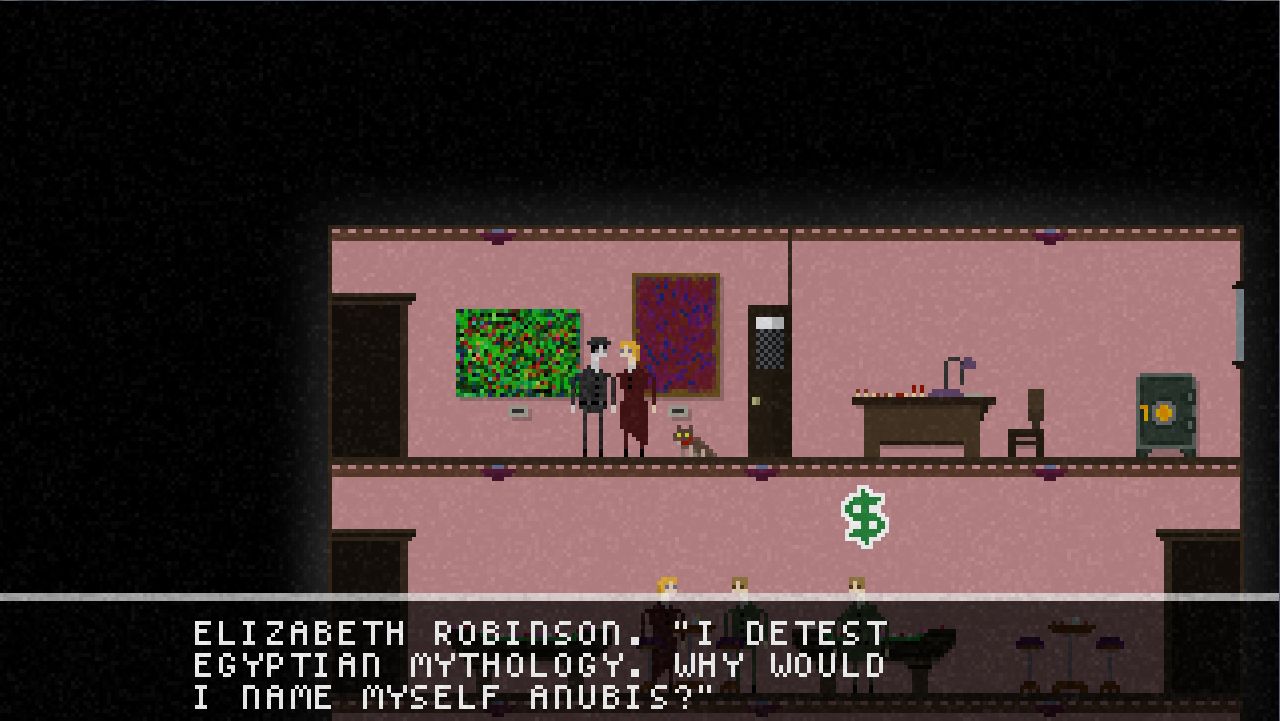 Every round of the game is randomly generated and last only a few minutes. You travel to a variety of areas in the town via map selection, then look through for clues and supplies, while gathering possible suspects from residents. Areas are also marked if they have had an event recently, like a murder or a takeover by another faction. You have to use your best judgment to stay hot on the trail, but remember that your time is limited. Your detective hungers, so you need to buy food with spare change you find in different areas, or you will end up dead before the killer is found.

Combat is simple and quick. Just press a button to fire off your handgun and kill the person directly in front of you. It works the same for your enemies as well, so surviving on harder difficulties comes down to knowing when to use your bullets or run, and knowing when you should watch your back. This creates a tense, stressful mood that just drives you more and more to find your culprit before you’re done for. The dinner party mode is even worse, as you’re trapped in a small home where everyone at this dinner party is on edge after a murder and will occasionally wig out and start shooting at you.

With the pixel grainy presentation, fast rounds and quick deaths, Noir Syndrome manages to be an addictive little game with a lot working for it. You can also unlock costumes and other goodies by collecting costume scraps and beating challenges, giving you more goals that keep you coming back. It’s a really interesting idea that is executed near perfectly, though the lack of change in scenario can make the game a tad repetitive after a few hours. But hey, it’s only seven bucks, it’s well worth the price. It’s the sort of game you can always come back to for a few minutes and get your fill.