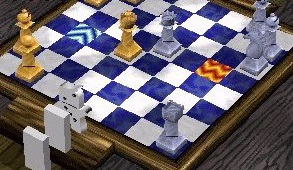 From a conceptualization point of view, game development is not without risk. Games are laborious works, with long development times and a high consumer cost. Therefore, like other entertainment media, it is most profitable to appeal to the mainstream – Madden does not sell millions of copies every year because it innovates, instead it delivers a universally accepted subject with largely the same gameplay formula that maintains its widespread public appeal. Why spend money developing a new concept when you can repackage an old idea and still achieve platinum sales?

If gaming is your hobby however, this lack of innovation can leave a bad aftertaste. Thankfully for the hardcore gamer, a few companies live (and die, unfortunately) by experimenting with offbeat concepts. Among them is niche Japanese developer Artdink, creator of decidedly non-mainstream titles like an underwater wildlife simulator and a caveman strategy game. However, one title they produced fuses a more approachable gameplay style with quirky Japanese humor – and the result is No One Can Stop Mr. Domino. 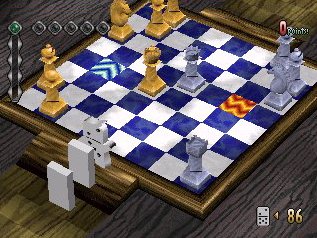 No One Can Stop Mr. Domino saw release for the PlayStation in 1998 (it was published in the U.S. by Acclaim of all people) and was quickly overlooked. It lacked all the elements that make up an overnight mainstream success – in their place were imagination and originality. Mr. Domino! is an action puzzler following the exploits of – who else – Mr. Domino and his four equally relentless cohorts: Ms. Domino, his fiancée/sister (?); Bruce, the fast moving brute; Pierre, the dim-witted and slow moving French stereotype domino; and D/M*?0, the mysterious alien domino. This is definitely not a story-driven game and as such the different characters only serve to complement one thing: the gameplay. 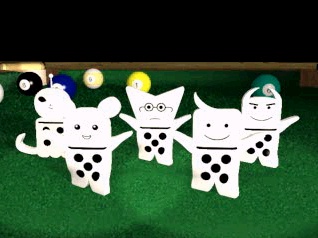 The gameplay itself involves running circles around various locales like an amusement park and a casino while setting a line of dominoes. There is a point to setting this domino procession: to clear each of the game’s six stages Mr. Domino must hit all of the special tiles, or trick switches as they are referred to, contained within them – it is possible in each stage to do this with a single domino line, though this is quite difficult. The best way to sum up the gameplay is a fusion of a racing game with Domino Rally, if you’re old enough to remember what that is. It’s certainly not a style of play you see everyday, or, well, ever in fact. This uniqueness is what the game really has going for it, though it’s rather hard to explain it in words. Here is a basic gameplay explanation, by steps:

1. SETTING THE DOMINOES!!! – The basic unit of the game, Mr. Domino has a limited number of them in each stage, so they must be carefully lined up using the most concise route possible around the stage. But you can’t place them arbitrarily – the domino line has to stop right in front of the next element – the trick switches.

2. THE TRICK SWITCHES!!! – The trick switches are easy to see as they protrude off the ground a little bit in addition to having a stage-specific design on their face (for example, in the first stage near the pool table, the switch near it resembles a billiard ball). It is important that the domino line stops in front of each trick switch – which seems contradictory. Trust me on this one, and know that the domino line continues on the hint tiles.

3. THE HINT TILES!!! – Hint tiles are emanating circle tiles that are always very close after the trick switches. It is important that the domino line continue on their mark. Why? Patience, young one! 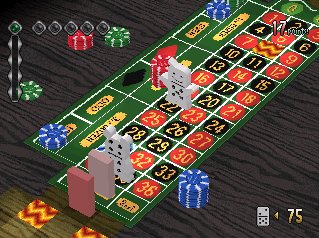 4. KNOCK ‘EM DOWN!!! – Once you’ve set all the dominoes up correctly, you will have lapped the stage, bringing you back to where you set your first domino. What to do now? Have Mr. Domino run into it, of course!!! Once the dominoes start to fall, they will start hitting the trick switches, leading to the most amusing aspect of the game – the tricks!

5. THE TRICKS!!! – With each trick switch hit, it will affect something in the background, usually in a comical way. These are rightly referred to as tricks. But they aren’t just for show – each trick will always land on the hint tile near it, thus continuing the domino effect. 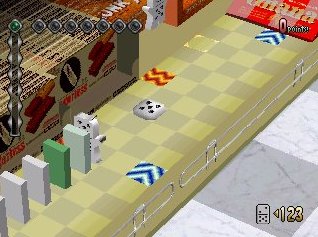 Should you have done everything right, you’ll have cleared the stage in one shot! If not, you’ll have to go back around twice more to set up what you missed, then to knock down the dominoes. It’s extremely important to try and get it in one shot – but of course, this proves difficult as dozens of stage specific traps can trip up Mr. Domino, thus interrupting the domino sequence. Here’s where the game’s name comes in – Mr. Domino is always moving forward, and should you squander the line, he won’t be able to turn around. Time is also against you – Mr. Domino will slowly turn from lively to inanimate and if you take too long the game’s title will be unfortunately contradicted by a Game Over screen. 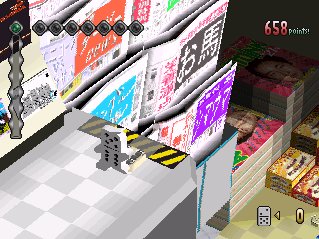 Graphically, the game isn’t a powerhouse though it certainly has its charms, mostly in the tricks themselves. For instance, the 3rd stage follows Mr. Domino assaulting a hapless Japanese family, and the tricks range from the father getting punched in the groin to the mother finding a bomb in the oven. The tricks’ effects are wacky and memorable and are the game’s true charm. The second stage – a Japanese supermarket – is also notable as the background is made up entirely of real Japanese food products, including ones us gaijin would recognize like Pocky and Pretz. 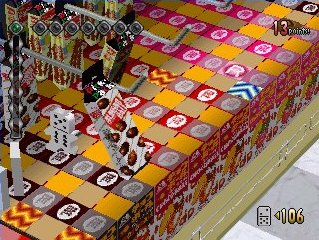 In the sound department, things are a little lacking. The sound effects are adequate but reside between varying ranges of cute, from Mr. Domino hopping along to the sound of the dominoes falling. There are a few random Japanese phrases thrown in there, which while you might not be able to understand they certainly add to the wackiness of the game. Musically, it’s unfortunate to report the soundtrack is mostly forgettable. It’s definitely not bad and won’t grate on your nerves, but it does little more than serve as an accompaniment to the bizarre events on the screen. 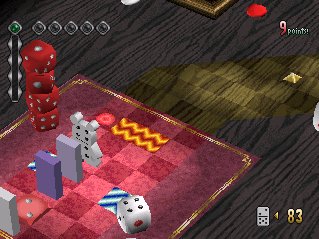 No One Can Stop Mr. Domino never aimed for popularity and seemed destined for cult status. And being that it’s obscure, it won’t hold you back more than $5 in a bargain bin; however, can you really put a dollar value on originality? Long after you’ve forgotten who made the cover of Sports Game 200X you’ll remember the unique time you had with a certain unstoppable domino.