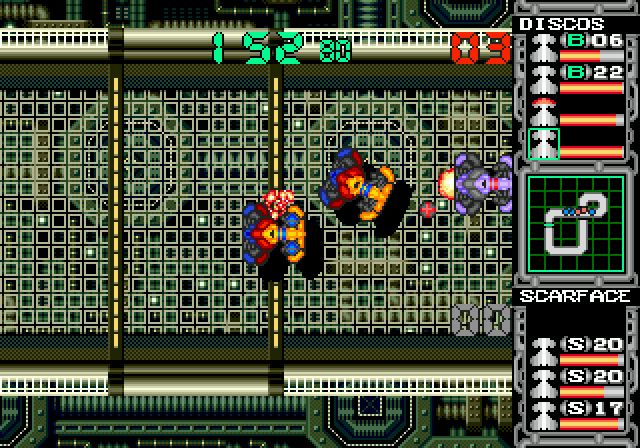 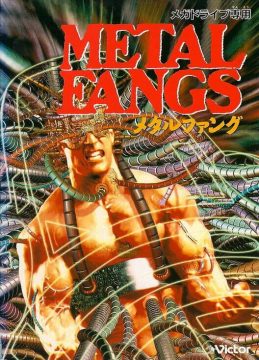 Metal Fangs is pretty unusual for a racing game. Rather than controlling a single car, you actually oversee a squad of four of them, competing against an opponent with a team of their own. Races takes place on fairly small, circular tracks, and each time a car makes a lap, that team gets a point. By default, all of your racers are governed by an AI, though at any time, you can hop between them and take the steering wheel for yourself. The most straightforward way to beat your opponent is to destroy all of their vehicles – after all, less cars crossing the finish line means less points for them – and if you blow up all of them, you’ll end the round early. Cars can be equipped with a variety of weapons to make combat easier. 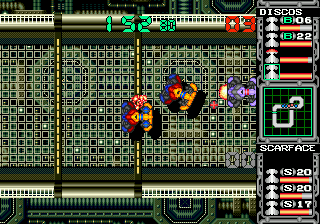 There’s a super interesting game buried with Metal Fangs, but ultimately it stumbles because there’s not enough for the player to actually do. The actual racing is incredibly simple, with no speed boosts or anything that actually catch up with other cars in front of you, nor is there any way to turn ahead and drive in reverse. Ammunition is limited and runs out quickly, requiring that you then ram into other cars, but they have armor made of tin foil and seem to damage themselves just as much as their opponents. You do gain money after winning matches, which can be bolstered by playing a rather out-of-place card game, which can then be used to improve and customize your vehicles, but it still doesn’t feel like it’s enough to make the experience engaging. As such, it feels more like an experiment than a game you’d actually want to play. 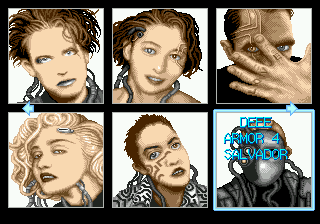 So what remains is Metal Fangs‘ aesthetics, which can be described as “cyberpunk as hell”. The package artwork and title screen features a ripped dude wearing a VR mask and overflowing with cables stuck around his body. You can pick from over a dozen characters to drive your cars, and nearly all of them are rip-offs of popular American celebrities, redrawn as cyborgs – it’s the sort of game that would’ve been a legal disaster had it been released unaltered in the United States. The sci-fi post-apocalyptic setting is cool too, though the in-game visuals get a little repetitive – there’s only one type of car design, and the only thing that sets the teams apart is their coloring. While the credits are vague, the soundtrack is believed to have been supplied by Sega luminary Hiroshi Kawaguchi (Space Harrier, OutRun), and while it’s not exactly a Mega Drive classic, there are still some solid tunes within.