With a small team and a devkit purchased, Tajiri and the rest of Game Freak (with help from Kindle Imagine Develop, Inc.) tinkered to create their first officially published title. Despite being a relatively simple game technically for its time, Quinty, as it was called in Japan, had a very unique element of dispatching foes. Each floor panel could be flipped like a card to sweep your opponents off their feet, though they can only be defeated if they’re pushed into the walls on the edges of the board. In respects, it’s a kid-friendly puzzle-esque take on the classic arcade game Robotron: 2084. The plot, going by the original Japanese premise, has the jealous titular Quinty being jealous of her older brother Carton’s girlfriend, Jenny, stealing attention away from her. Thus, Quinty kidnaps Jenny and flees, leading Carton, along with Parton if you play co-op, to run through the Doll Kingdom to find and rescue her. The North American story has Jenny, now called Princess Candy, being trapped in her own nightmare representation of her kingdom with her dolls coming to life, leaving Bon-Bon and Non-Non to save her. Quinty isn’t given a name, though she still represents the leader of the living dolls.

The game spans 100 levels in total. To begin, there are 8 buildings available to the player, each filled with one type of doll as you battle through 10 levels in each in order to defeat a boss doll at the end. Outside of the starting grunt enemy, each doll has a unique trait that makes dispatching them harder. There are Jumpers who constant hop about, Ballerina dancers that spin and bounce around, dolls that mimic your every move (as well as your stylish cap-wearing fashion sense), annoying Artists that can spawn more baddies or negate a tile with their doodles, and Acrobats that tend to dodge every tile flip you make. Not only that, but a few dolls like the hefty Sumos, Swimmers, and Martial Artists that have means of turning the tiles on you with their flipping abilities. Halfway through each set of stages, the dolls of each tower are switched for a faster, harder variant once piling on the numbers isn’t enough. Not to mention the tiles themselves having their own properties to add to the puzzle element of clearing each board. Some are helpful with giving points, 1ups, automatically flipping tiles for you, or sending you to bonus stages. Others can impede or can become obstacles such and flinging you around, blocking your path, or just being unflippable. Worst yet, some tiles spawn more dolls to deal with if you flip them over, and things can turn south fast when one Flip-All tile reveals 6 spawners at once. That or flipping dolls into the walls too much and shuffling the floor deck to an unflippable grid while 3 dolls now corner you. One touch from them, and you’re dead. 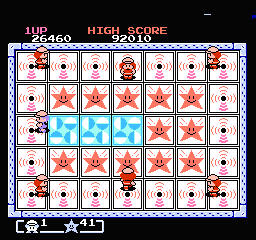 You start with 3 lives with more to earn, and there’s infinite continues, but no way to save your progress. As tough as some board layouts can get, especially with the more aggravating dolls to contend with, the Brother Doll bosses at the end of almost half of the buildings are pretty easy to deal with. They hop about quick and can fling tiles at you, but it’s easy to wait near the edge and flip them into a wall once they land in front of you for a swift victory. Quinty, however, doesn’t go down quite so easily. For many boss battles, she awakens a team of super tough variants of the dolls before taking off. Later, once you’ve conquered all the levels, she whisks you away to the final floating castle for the 10 most-brutal set of challenges for she takes you on, hopping away as you draw near to her and sending fast and deadly magical sparkles straight towards you in the final showdown. Should you wish for more, a secret harder set of 100 floors is available with a simple cheat code. 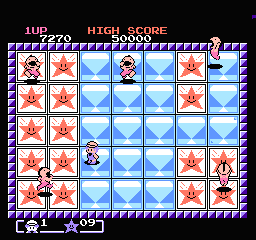 Outside of the story changes, the Western release saw a slight retooling of stage layouts/order along with minor palette and movement tweaks to a few of the dolls. The real major change was the boxart and title screen, becoming super-Americanized with sinister appearances given to the dolls rather than Sugimori’s cute chibi designs. This darker take on the dolls is even showcased in the TV Commercial made for the game, making the game appeal more as a fantasy game. In its defense, the darker, meaner design choices for the American release was Game Freak’s fault, since the staff at the time thought that’s what the US market preferred. Publication was handled by Hudson Soft in the West instead of Namco, as well. While mostly forgotten in the West, Quinty kept some notice in its country of origin, most in part thanks to character designer Ken Sugimori creating a short manga of the characters from time to time. 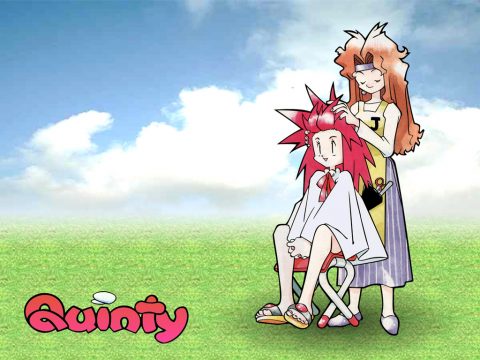 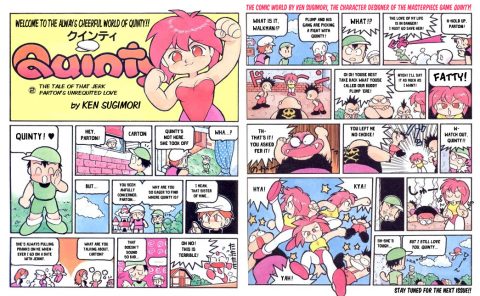