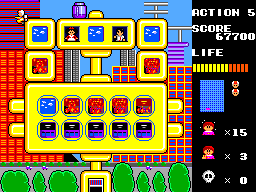 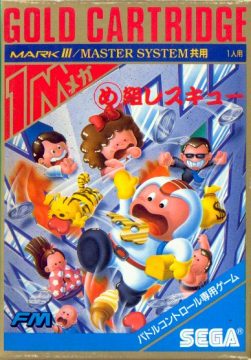 The Paddle Control was a controller that Sega released for its Mark III/Master System back in 1987. It never made it outside of Japan, but it doesn’t come as much of a surprise. Paddle games had their heyday, if you want to call it that, back in the 70s with the Magnavox Odyssey and Atari’s Pong. With one action button (occasionally two) and a control scheme of either a) move left/right, b) move up/down, or c) rotate clockwise/counter-clockwise, their potential is limited, to say the least. 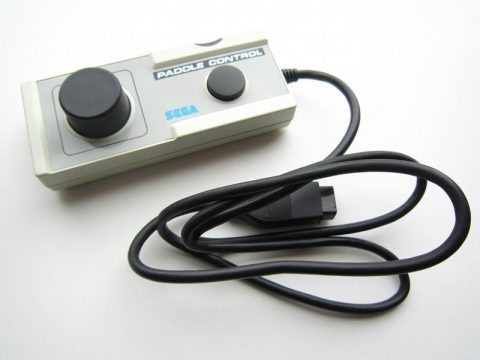 Between March of 1987 and July of 1988, only six games were released that supported the Paddle Control (four of which required it to play). Woody Pop came bundled with the Paddle Control, and it’s essentially a dressed up version of Breakout. Three racing games that use the paddle are Alex Kidd BMX Trial, OutRun (optional) and Super Racing (also optional), and it actually works quite well. Then there was Galactic Protector, a mildly interesting shoot ’em up. It features Fantasy Zone‘s Opa Opa rotating around a moody earth, blasting away cosmic objects before they crash into the surface. The sixth and final game released to use the Paddle Control, and arguably the one that makes the control worth owning, is the quirky firefighter game known as Megumi Rescue.

Megumi Rescue consists of two firefighters double-teaming a trampoline (simply called a mat in the game’s manual) while an unfortunate third bounces up and down, tasked with rescuing occupants from a burning building, and if that weren’t enough, simultaneously extinguishing the blaze. It was developed by Aicom, the makers of Vice: Project Doom (among others), and was originally slated to have an arcade release. For one reason or another, however, this never happened. An arcade board was leaked and sold to a private collector, who posted a video on Youtube, though the ROMs have not been publicly dumped for play on an emulator. The title screen indicates that it was developed by EXA Planning, which was a joint venture between Aicom and another company called Eleca.

On the outside it looks cute and innocent, but on the inside lurks something far more sinister. This game was made by some oddball designers who have a fondness for dark comedy. There’s some speculation that it was deemed inappropriate for exposure in arcades, or anywhere outside of Japan, for this reason, but only Sega knows for sure. Nevertheless, the game was reprogrammed for the Mark III.

There are a total 30 stages, or “actions” as they’re called in the game, and each one features a different structure filled with civilians and occasionally a cat (which the programmers had the foresight make worth more points than some of the human residents). The right side of the screen contains information such as your score, the fireman’s life meter, a small map showing the position of the fireman and the mat crew, how many victims are in the building, how many have been rescued, and how many have died. The music is catchy and light-hearted, although not what one would imagine given the subject matter. There are three different tracks that will play throughout the course of the game and will alternate every ten actions. Megumi Rescue also makes use of Sega’s FM Sound Unit.

At the start each action, a fire truck drops off the rescue crew in front the burning building, and you’ll have a few seconds to position them before the rescuer is launched into the air. Once in the air, you can either grab a hold of a window by pressing the button on the Paddle Control, or just bounce around helplessly on the screen. Controlling where the fireman goes after he lands on the mat can be tricky, especially if you let him bounce around for a while without grabbing any windows. The general rule is that if he hits the left side of the mat, he’ll bounce to the right and vice versa (though depending on his trajectory, he’ll sometimes bounce straight up). It can also be a bit disorienting when the mat crew goes off screen after a full jump by the fireman, but the map on the side mitigates this somewhat. An advantage that the paddle has over the standard D-pad controller is that there’s no speed limit for maneuvering the mat crew, so it’s possible to never miss anything that falls (once you get used it).

After latching onto a window, you can press the button again to make the fireman let go and fall straight down, but he’ll also eventually drop on his own. Grabbing a window that has a fire in it will put that fire out, and grabbing a window occupied by an inhabitant will cause the fireman to bring them down with him to be rescued. If there’s more than one being in a window, another one will appear immediately after you drop down. All the mat jumping and window grabbing will slowly decrease your life meter. If the meter fully depletes, our bouncy buddy will be consumed in flames and lose a life. Falling to the ground without landing on the mat will also result in a lost life. If all your lives are spent, it’s game over and back to the title screen; however. if you hit start quickly enough, you can start over on the last stage you died on. Otherwise, the game will start back on Action 1. If the building is emptied of all inhabitants, the fire truck will return and fire a missile in the air which somehow eradicates the remaining flames, possibly leaving you to wonder, “Couldn’t we have done this earlier?” If you finish without anyone dying, you’ll earn a cool 10000 points on top of your score.

If you concentrate solely on rescue efforts and ignore the fires, they will spread to adjacent windows. If a fire reaches an inhabitant, they’ll eventually panic and jump out. You can catch them with the mat and still get the same amount of points for saving them as if you grabbed them with the bouncy fireman. This is where the game’s twisted humor comes in to play. The combination of the cutesy sprites, colorful backgrounds and the upbeat music and the silly sound effects, it’s hard to not laugh when a resident makes a suicidal jump to avoid being roasted alive.

Aside from getting everyone out of the building, you can also attempt to snuff out all the fires in order to finish the action. More often than not, however, it’s impractical to jump from window to window putting out the fires because they spread rather quickly and will occasionally reignite in the same window you just left. There are other ways to deal with the fire though.

Between the fires and the victims, there are hidden items to be found in the vacant windows and caught with the mat. Usually the items that fall out will be something to increase your score a little bit (coins, moneybags, safe boxes, jewelry), but sometimes you’ll get something more beneficial. A 1UP box will, naturally, give you an extra life, a fire extinguisher will completely replenish your life meter, and the mat upgrade will widen the mat and offer much better control over your fireman as well as provide more coverage for suicide prevention. There are two special items that will instantly end the level. One is a key, which will flood the entire building with water from the top down, and the other is a helicopter that launches a fire-destroying missile just like the fire truck. In addition, grabbing the helicopter will also trigger a bonus stage after the action stage is over. Anyone still inside when the flood occurs won’t be harmed at all, and will be picked up by an ambulance afterward. In fact, anyone remaining in the building is worth double the points they normally are. For scoring purposes, the best strategy is to find the helicopter as quickly as possible without any inhabitants splattering on the pavement. The bonus stage brought by the helicopter will score you even more points and involves catching falling items with said helicopter. Items to catch include money, jewelry, food for health, and occasionally some 1Ups. Catching everything earns you a whopping 30000 bonus points.

On the flip side, if you’re not concerned at all about scoring points, that isn’t a problem. The thing that really clinches the underlying darkness in this game is that, despite what the name and the game itself implies, rescuing people is completely unnecessary. You’ll still be allowed to continue even if every single inhabitant falls to their death. The mat upgrade can be found as early as Action 1, and it’ll stay with you once you get it provided you don’t die. It’s possible to jump straight up and down on the mat forever while you wait for the entire building to go up in flames and everyone inside checks out (although you will eventually have to collect a fire extinguisher to prevent your own demise via combustion). Self-preservation is paramount, and nothing else matters.

Ultimately, Megumi Rescue is charming and funny, but gets repetitive quickly due to the limitations inherent in paddle controllers. If and when the bouncing around on screen becomes erratic, grabbing the window you want when you want to can be an exercise in frustration. Since there are no password or save functions, a full playthrough has to be done in one sitting. The ending is nothing special and it doesn’t even show off your final score in any fashionable way. Despite the game’s shortcomings, however, its variety of colorful backgrounds, buildings and inhabitants, and off-kilter sense of humor make it a blast to play if you have an hour of free time to burn. Playing the game all the way through is still a worthwhile endeavor, but it’s best left to the most determined of gamers.

“It’s a miracle we didn’t get ourselves busted or killed.”