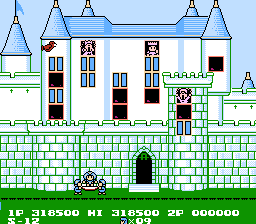 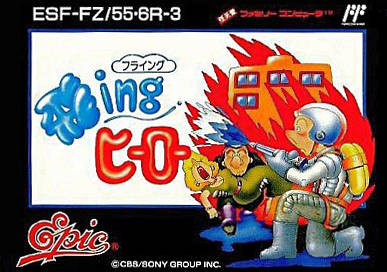 Less than a year after Megumi Rescue came out, Aicom decided to revisit its bizarre take on fire rescue on the Nintendo Famicom with Flying Hero. This time around, the paddle control scheme is ditched in favor of a standard controller. Although the game takes a hit in the graphics/sound department (especially if you’re accustomed to the Master System’s FM sound capabilities), it is a net improvement over its predecessor.

The premise is identical; you can control a crew of firemen with a bouncy mat and attempt to put out fires and rescue civilians (now known as “guests” in this game), who will jump if the fire gets out of control. Almost everything else, however, is completely different. There’s no more grabbing a hold of windows and there’s no more life meter to be concerned with either. The fires now have three levels of intensity, and flying into a fiery window will simultaneously knock you back and knock the fire down a notch, or extinguish it if it’s already at its lowest level. Many stages also have either a bird or an alien spaceship flying about that you can bounce off of, which can be both a blessing and a nuisance. Guests will be automatically pulled out of their windows if the fireman whizzes by. The suicide jumping happens less frequently as they’re bunched together in fewer windows. To help make up for the quick movement allowed by a paddle controller, the mat crew will move faster if they are a certain horizontal distance away from the fireman. And to top it off, if you뭨e feeling competitive, the developers threw in a two-player mode (tragically not simultaneous).

The cast of guests is even more diverse than the previous one, despite being slightly fewer in number (16 here compared to 18 in Megumi Rescue). There’s a few returning faces, but most of the urban characters have disappeared in favor of fantastical ones (perhaps an attempt for the game to be more light-hearted). There’s a token animal, now strangely a Monkey instead of a Cat, and some of the feudal Japanese royalty from the previous game has been replaced with medieval European royalty, but the new additions that stand out the most are a group that comes straight from 1930s horror flicks.

For whatever reason, even though there are officially 16 different guests, there are technically just 14. Both Girl B and Grandma are absent from (most of) the game; their respective sprites exist in the code, and they’re mentioned in the instruction booklet, but they do not appear from any window in any of the game’s stages. They do occasionally pop up in one of the mini games though.

Since there’s no more window grabbing, items are found by bumping into the fire. While Megumi Rescue only had a mat upgrade as far as power-ups ago, Flying Hero boasts a few extra goodies, and even a couple of power-downs.

Mat upgrades are still available, and can be collected multiple times in one stage, potentially making a giant mat that’s hard to miss. Unfortunately, mat upgrades don’t carry forward into the next stage. Then there are Power-Up Coins; grabbing one of these bad boys will make your fireman more effective against fire and also make him change color. A fully powered up fireman will turn red and extinguish any fire he bumps into regardless of how fierce it is. Other upgrades include a Power-Up Suit that lets you temporarily move through the fire instead of bouncing off of it, and the Double-Up summons a second fireman to juggle alongside the first.

If you pick up one or more mat upgrades, you’ll sometimes run into the Pickaxe item which will downgrade the size of your mat. The other negative item to steer clear of is the ember, which will set your mat ablaze. While it won’t hurt the fireman or anyone else who lands on it, letting a second ember touch the mat will make it go up in smoke, inevitably causing your fireman to crash into the ground and die. If an ember does touch your mat, however, you can find a fire extinguisher to put out the fire. Running out of lives will send you all the way back to Stage 1; there are no continues in this game sadly.

Like in the previous game, there are items that will instantly end the stage. Similar to Megumi Rescue‘s key (and equally strange), the Trumpet will summon a rainstorm that will eliminate the fire. The Radio will call in a helicopter, launch a fire-killing missile, and trigger a mini game where you can score bonus points by knocking items out of the clouds above. The other mini game comes when you find what’s called a Matoi, which is a flag once used by firemen during the Edo period of Japan. Collecting the Matoi will transport you inside the building itself, and it paints a slightly more accurate picture of what fire fighting is actually like. 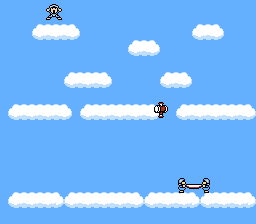 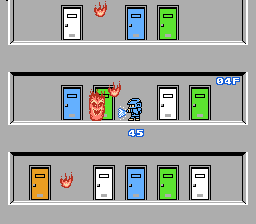 In the Matoi mini game, you have 60 seconds to climb up or down the building, hosing down any fires that cross your path, searching through every door along the way for any victims and ultimately a stage-ending key. You’ll occasionally find a giant flame monster or a package of dynamite (???) on the other side of a door. If you run out of time or get hit by the exploding dynamite, you’ll lose a life and have to start the normal stage from the beginning. A couple of power-ups that help you through the building are some speed boots and a clock that’ll freeze both the timer and the flames. The ultimate goal in this mini game is to find either the silver key or the gold key. Both keys will end the current stage, but the silver key will take you to the next stage while the gold key will skip the next stage and take you to the one after that! It should be noted that the two mini games are the only opportunity to gain extra lives.

With 32 stages in all, the game boasts a little more variety. Megumi Rescue used strictly urban locales (with a couple of Japanese temples at the end), whereas Flying Hero has forest tree houses, medieval castles, haunted mansions (which house our Halloween inspired trio) and what appear to be colonies on the moon. Most of the structures fit on a single screen, but 8 of them (stages 5, 14, 17, 21, 24, 26, 31 and 32 specifically) not only go beyond the screen, but are much taller than any of the buildings in Megumi Rescue. These stages, unfortunately, are a disappointing mess. You lose control of the mat crew when they go off screen, and any items you find in the upper windows will fall into oblivion. When you come back down, the crew will reappear directly underneath your position. There is minimal risk and reward in the tall stages, and they are ultimately a waste of time.

While the game retains some of Megumi Rescue‘s dark sense of humor, the tone is more subdued. The biggest kicker is that the game doesn’t care at all about how many guests fall to their death. If you clear the building of guests before extinguishing the fire, regardless of how many you actually save, you get a 30000 point “perfect bonus”. If you put out the fires first, then there is no perfect bonus, even if nobody dies. Not only that, for some odd reason, anyone who is still in the building and normally worth 900 points or more will be worth 800 points less when they evacuate to the ambulance. To be fair, this probably has more to do with programming limitations on Famicom hardware and less to do with the developers being psychotic. 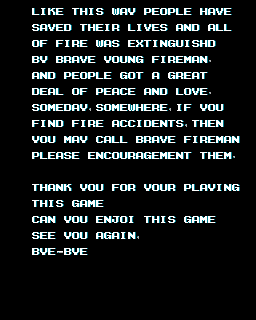 Completing the game treats you to a touching Engrish ending.

Compared to Megumi Rescue, Flying Hero is a more enjoyable experience. It’s easier to play without the window-grabbing mechanic, and the added special items give the game more spice. However, the game is a little less forgiving. There’s still no save feature or password function, and even though completing the game in one go is more doable, one go is all you get. At times it feels like the Famicom wasn’t capable of exactly what the designers wanted to do with the game (mainly the inferior visuals and unpolished tall stages), but they not only make it work anyway, they make it work better.

As a side note, Flying Hero was slated to come stateside in the early 90s, courtesy of ASCII Entertainment. It was advertised in magazines such as Nintendo Power and Electronic Gaming Monthly as Super Rescue, and later Blazebusters. There was even box art made for the game, but unfortunately the American release never came to be.

Special thanks to Erin Belmont for her translation assistance on both games.