Long before Blizzard became known for their RTSes, their Diabloes, and that one MMO thing they did to try to steal Everquest‘s thunder, Blizzard was known for being a console developer, more than anything else. In fact, even before they were known as Blizzard, they went under the name Silicon & Synapse. It was under this name they’d release one of their first games, and one that makes for a strong start to such a storied developer. 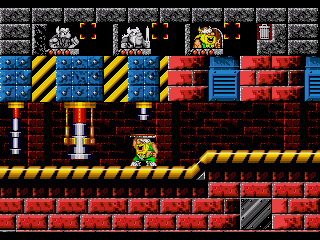 Sometime during the age of the vikings, three warriors return to their village after a successful hunt. While they sleep, however, they’re captured by a tractor beam and placed aboard a spaceship. Tomator, the alien conquerer who owns the ship, plans to place the Vikings in an alien zoo, which they of course quickly object to. Escaping from their cells, the vikings battle their way through the ship, and eventually come across a time portal somewhat aboard. From there, they travel through time on a quest to return to their own time, having lots of silly arguments with one another on their way.

The game itself is a puzzle platformer, somewhat more heavy on the former than the rather. The goal of each stage is to manuever all three of your playable vikings to the exit, collecting the various items and activating the various switches you’ll need to open the path to get there. Only one viking is controllable at a time, however, which means you’ll have to swap constantly between them, using their various abilities to get past the various obstacles. Be careful, however — the vikings you aren’t controlling are still subject to collision, meaning that leaving them in a path of enemies and hazards while you switch away can be fatal.

Each of your vikings can only take three hits, replenished by picking up food, with certain hazards and long falls bringing an instant end. If you bring any less than three vikings to the exit or happen to lose them all, your attempt is counted as a failure, and you’ll have to reset the level. Thankfully, you’ve got an unlimited number of attempts to try again, which reduces the frustration factor considerably. Even so, some of the levels can stretch on, and without any mid-level checkpoints to rely on, you’ll want to avoid taking unnecessary risks with your vikings when you can. 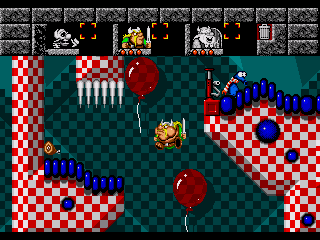 To actually reach the exit, you’ll have to use each viking’s special abilities in combination with each other. Erik the Swift runs the fastest, and has the ability to jump over obstacles — something the other two distinctly can’t do. He can also dash into walls and enemies alike to destroy them, although this leaves him vulnerable. Baleog has a sword and bow for close and long range combat respectively, making him the best choice for fighting enemies and hitting distant switches. Stout Olaf’s shield can block all projectiles and keep the other vikings safe, and can also be used as both a glider for long falls and a platform for the other vikings.

With only one Viking to play as, you’d hardly get anywhere, but it’s the way their abilities combine where most of the game’s puzzles come into play. For example, when you come across a hallway with a laser turret, neither Eric or Baelog are able to get past it safely. Olaf, however, can block it with his shield so that the other two can pass through. Or, if there’s a drawbridge with a button to lower it nearby, Eric can use Olaf’s shield for just enough distance so he can cross the gap, hit the button, and let all three Vikings across. The general moves are fairly intuitive once you get a handle on what you can do, which is handy, since you’ll be using them a lot. 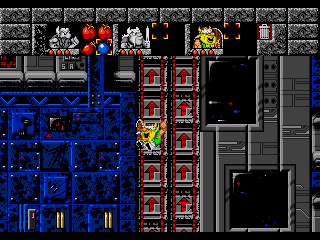 Besides the abilities each of the three vikings posseses, they also have their own inventory of four items each. Food heals injured Vikings, while some items of them help you against enemies, like screen clearing smart bombs. There’s also colored keys and items certain NPCs will ask of you, letting you progress further into the level. Inventory space is often at a premium, however, which means you’ll need to sometimes juggle items between vikings and figure out who should carry what. It’s also possible to discard items entirely, and should you discard something like a key, your attempt is going nowhere.

Like any good platformer, there are plenty of enemies to fight, and for the most part, Baleog is the only one who can actually kill them. Combat is definitely the weakest part of the game — your vikings get little to no invulnerability time, which means that if they get cornered, it’s very easy to end up losing one. The smart thing to do is to bring in Olaf as cover most of the time, and let Baelog handle the fighting. Unfortunately, when this isn’t an option, this can lead to frustration — Baelog can’t dodge enemies well, and Erik’s headbutt leaves him vulnerable for a bit too long. Combat is often where you’re going to lose most of your vikings, and at times, it can feel like more of an obligation from the usual puzzle solving. 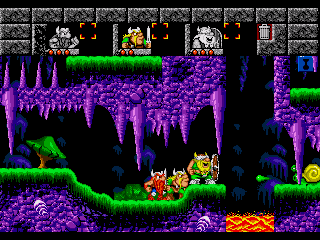 Besides enemies, there are also plenty of hazards and level gimmicks to make use of. Early on, you have buttons that can be pressed to activate certain things, fireball spewing stone carvings Olaf has to block, and bubbles that a Viking can catch a ride on. Each world also has its own things you’ll need to use to complete a puzzle. The spaceship has anti-gravity walls which make your Vikings float upward, often surrounded by hazards on the ceilings waiting to take them out. As you progress, you’ll also encounter things like magnetic cranes that let you move certain blocks around the area, or air pumps that balloonify the vikings and let them reach higher areas.

With the three character concept, you’d think that the game would be hard to pick up on, but it actually does explain things pretty well. The first few stages get you used to the game and the Vikings’ abilities pretty slowly, and pretty much every time you encounter a new thing, there’ll be a tutorial box there to tell you about it. The further you get, however, the more harshly mistakes are punished, and the more trial and error seems to become a necessary step. Thankfully, the game offers passwords for every level, so it never feels like too much progress is lost when you screw up. 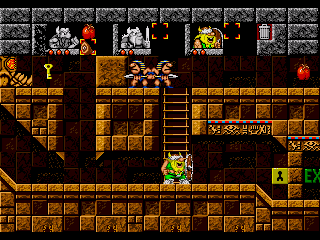 The game also features a co-op mode for not just the expected two players, but even three players at one time, should you have the right adaptor. If you have two players, each one can play as one of the vikings, and can swap to whichever one isn’t in use. Three players allows all the vikings to be controlled at once, which can make certain combat sections signficiantly easier. Unfortunately, the issue with these modes is that the camera is always focused on the first player, preventing the other players from being able to explore on their own from too far away. Still, it’s a surprising touch, considering how few games of time made use of three player support. 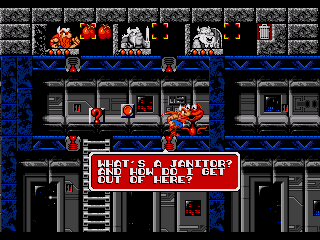 The graphics are particularly charming — the sprites are on the small side, but each of the vikings have their own animations and mannerisms that help set them apart. One particular quibble is that Baelog and Olaf share similar colors, which can make them a little harder to tell apart at a glance. While the enviroments aren’t quite as colorful as the vikings themselves, the game does a good job of changing up the scenery. There’s five worlds, ranging from Egyptian pyramids to a Zool-esque world of candy, each of offers their own enemies and unique elements. Each world also has its own music track, and most of them are actually shockingly catchy, with a heavy emphasis on funky beats that’ll stay in your head for quite some time.

There’s also a pretty goofy sense of humor throughout the game, which helps reduce some of the frustrations you might encounter as you get further on. The vikings will occasionally stop and have conversations with each other between levels and with the various NPCs they encounter, and their banter is a big incentive to keep pushing forward. Fail a level too many times, and they’ll even start to complain about the lack of progress you’re making. Sometimes they’ll even call out you, the player, for your ineptitude, in that wacky fourth well breaking goodness that was still so fresh back then.

The Super Nintendo and Genesis versions play fairly identically, but the latter features a new world and four extra stages not seen in its SNES counterpart, along with extra dialogue for each. The Genesis version also features a funky Matt Furniss soundtrack, even if Charles Deenan’s work for the SNES version is one of the rare times that Mr. Furniss doesn’t score a clear win for the music. The Genesis version, however, absolutely needs a six button controller, lest you struggle with how the game expects you to use the Start button to try to accomplish about anything at all.

The Amiga version follows closer to the SNES version, but suffers from the typical one button control scheme that so many Amiga games suffer from, delegating a little too much to the keyboard to be comfortable. The DOS version is similar in terms of control layout, and suffers that music that sounds lacking coming from the Sound Blaster or Adlib.

The Game Boy Advance Version, released about 11 years after the original version, is a shockingly poor port that’s perhaps best avoided. The handheld’s smaller size causes issues in terms of seeing what’s around you, which the more minimalist HUD doesn’t help. The reduction in buttons also causes the occasional annoyance with controls that wasn’t there before. The music also suffers from the GBA’s rather weak sound hardware, sounding like the SNES version if it were much more muffled.

In 2021, the game would see release systems modern at the time of this writing, as part of the Blizzard Arcade Collection. This collection offers not only the SNES and Genesis versions, but also a definitive version that mixes the exclusive Genesis levels with the controller layout and soundtrack of the SNES version. Along with the other games on the completion, this port also includes save states, a very useful rewind feature, and the ability to watch a walkthrough of the level, which can be interrupted any time you feel ready to take control. Unfortunately, the game retains its 4:3 ratio, but it’s still a highly polished port that’s well ahead of previous versions.

Overall, The Lost Vikings makes for a great concept for a puzzle game. It doesn’t always work — there’s too much combat that generally leads to the occasional unfair death, but when the game focuses on what it’s best at, it does it fairly well. 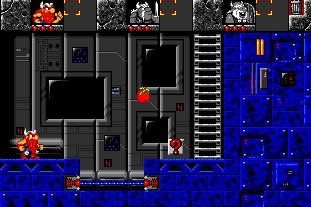 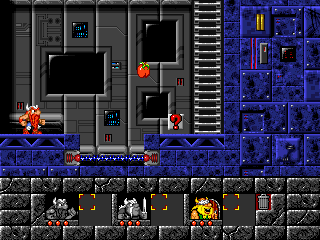 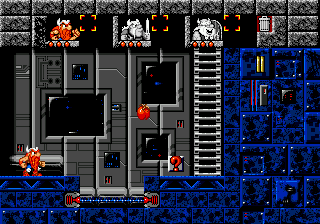 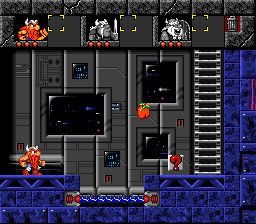 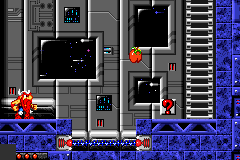