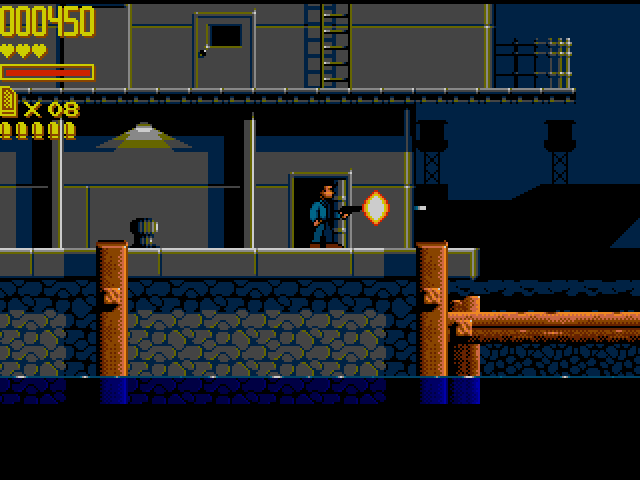 Ocean Software will always be remembered as a developer/publish with a dubious reputation, and it’s a reputation that is well earned. The software house’s output in the mid 80s to its liquidation in the late 90s was mainly licensed games of various quality, and it always seemed to many (with the exception of LJN) that no license was safe from the hands of the Manchester-based software house. And in 1992, on the eve of the release of the third film in the franchise, Lethal Weapon was no exception. It’s strange that a video game adaptation of the highly successful and beloved franchise had not been attempted until this point, but Ocean had sought to remedy that by snapping up the rights to produce a number of video games based on it. Unfortunately, none of them are very good.

Ocean’s first attempt was released in October 1992 for the SNES, Amiga, Atari ST and C64, which was an action platformer in the vein of many of Ocean games. It offered an opportunity for gamers to play as police officers Martin Riggs and Roger Murtaugh for the first time, and live in Richard Donner’s high octane action-orientated world. The game is not directly based on the third movie, but instead serves as a “greatest hits” of the partner’s adventures. For example: the first mission in the docks has the duo taking on a gang of international villains who are using diplomatic immunity to export drug money out of the country, mirroring the plot of the second film. The presentation is also pretty decent, with the game sporting some detailed, if a bit cartoony, graphics and a decent soundtrack, even if it is missing Eric Clapton’s iconic soft jazz from the films.

Unfortunately, once the game starts proper, this beautiful facade falls away. The level design is quite bland and unimaginative (docks, sewers, nondescript warehouses, etc.). Where the game really falls down, however, is the platforming. The controls lead to a very frustrating experience, as the jumping is very floaty, and it’s hard to turn in the air, leading to lots of narrowly missing ledges or slamming into enemies that have just appeared. Ammunition is limited, but ammo pick-ups litter the levels, but enemies take at least two hits, and the difficulty is relentless, even on the lowest setting. The game piles enemies and obstacles on the player at an almost unfair rate. You quickly learn there is no skill to the game, and it just requires a large amount of trial and error, but even then, the enemies can still appear randomly and mess things up. There are also boss battles at the end of each mission, but they are just larger versions of the standard bad guys with more health. They’re pretty easy to defeat too, as their attack patterns are not very difficult to work out, and the areas you fight them in are quite large. 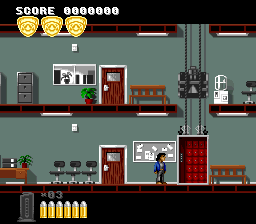 It’s a shame that Ocean didn’t try to capitalize more on the main draw of the license. The “buddy cop” element that the series is built on, and arguably popularized, is completely missing, as the game is single player only. The player can only switch between characters in the locker room between levels. It’s also an even bigger shame that there’s no difference between the two characters apart from the sprites. The manual states: “You must choose [each character] wisely for each mission”, but this doesn’t actually mean anything. At the time of its release, the game received mostly mediocre reviews across most of the systems. The main complaint was that the game was a very derivative shooting platformer, much in the same mold as Ocean’s other efforts at the time. Two years after the games initial release, the Amiga magazine The One, summed up that this era of license gaming with Lethal Weapon as the example:

“Thankfully, the days when a licensed game instantly equated a platformer are nearly behind us now, but this is a grisly reminder of the way things used to be.”

All of these versions of Lethal Weapon were developed in-house by Ocean, so they all share a lot of similarities. The SNES version is the flagship version, being the prettiest graphically, plus the level layouts are more interesting, as the character can shimmy on bars and climb ladders, ropes and chains. However, the controls still suffer – the jumping is incredibly floaty as the character will stay in the air even if their head hits an obstacle until gravity pulls them back down, plus all levels feel they’re coated in a layer of ice. Also unique to the SNES version is a timer, which is unfairly tight. The soundtrack by Dean Evans is excellent, and is deserving of a much better game.

The Amiga version was developed by Mick West, a former Binary Design Employee, and is the best of all the versions. While it’s not as pretty looking as the SNES version, it has smoother scrolling and is much better to play with its tighter control scheme. Also the presentation has a lot more thought put into it, as the hub level is populated with NPCs that make it feel more “lived in”. (However, they cannot be interacted with). The music is also the best, as it has stronger instrumentation and more listenable, mainly because of the Amiga’s PCM based sound chip. The Atari ST port retains the same level of presentation, tight controls and level layout of the Amiga effort, but has worse music and muddier, muted graphics. Also, there’s plenty of stutter in the animation and there is no smooth scrolling. When the player reaches the very right edge of the screen, it will then “stutter” back to reposition the view.

The DOS version has the worst graphics of all the computer versions, with jagged sprites and very basic backgrounds that are muted, dull, and colorless. Although it has proper scrolling, the character sprites stutter during movement. Thankfully, the controls are just as good as the other two PC versions, which is a small comfort. But the music! The  developers slapped on an awful MIDI piano, giving the soundtrack a bizarre wild west saloon feel. To make matters worse, there are no sound effects to complement the action, which makes one want to turn the sound off after 30 seconds of play.

Last is the C64 version, which is the worst of the bunch, as everything about it is pretty atrocious. It has the worst graphics, no music, and standard controls (only joystick support). It only allows the selection of Riggs or Murtaugh at the beginning of the game, then proceeds down a linear path of poorly re-designed versions of the levels from the other games. There’s a lot of sprite flickering each time a character is hit and because of the muddy graphics, it can be difficult to spot hazards.

[3] Release dates from Giant Bomb, one of the few source with full release dates

[4]List of 1992 games from Ocean, most are universally reviled

[6] Reviews and user ratings on GameFaqs.com