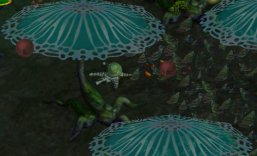 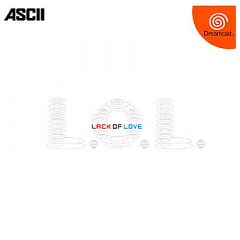 Kenichi Nichi’s second project as head of Love-de-Lic would, predictably, turn out to be his last. Not too long after Lack of Love – or L.O.L. – debuted in Japanese stores, the company disbanded and watched its members take part of new and exciting projects with the coming of the years. But as his last project under his cherished studio, L.O.L. has acquired a very particular status within the Japanese video gaming universe, not so much because it came to be a very rare and expensive collector’s item, but because the game involved a great deal of research and contains a crucial message which has remained ignored for too long. 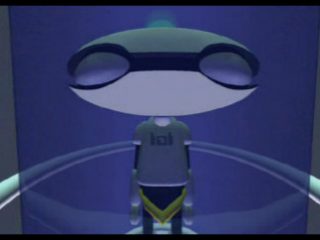 As best friends, Nishi and the internationally acclaimed composer Ryuichi Sakamoto started to discuss video games at a certain point. Between several live encounters and messages exchanged between old companions at a distance, a new and experimental game concept was forged, one which Nishi says to have originated from Sakamoto’s mind – though it is impossible to precise to what extent his humble claim is true. It was Ryuichi Sakamoto who first came up with the notion of symbiosis, a phenomenon best described as the cooperation occurring in nature between two animals, often yet not always for mutual benefit of both parts. After a long period of study, Love-de-Lic’s Lack of Love was no longer an idea or a name in Ryuchi’s mind: ironically, it became the newborn child from these two friend’s mutual benefiting cooperation.

Far from unexpected, L.O.L.‘s game design suffers from an uncompromising scarcity of all things ordinary and mainstream. The enigmatic intro shows a robot leading a spacecraft with the insignia LOL drawn in both sides of the vessel. This rocket-like craft navigates the universe endlessly, as the small mechanical servant observes a large screen showing unintelligible data. His mission, it seems, is to discover planets far out in the galaxy where human life can be sustained. After discovering a planet whose environment is able to support it, the new course is set and the craft enters this new world. Robots come out of the ship all in order, and together they commence to work on the illustrious process of terraforming: making an alien planet ready for Human beings to inhabit it by making it similar to our own earth. 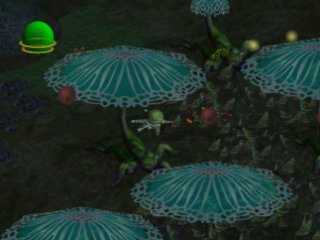 Strangely, the game consists of a totally different experience whose connection to this introductory event is only to be understood later on. The player is given control of a new species from the very moment of their birth, as it is the first objective of the game to rip open the egg where this creature was formed, in the depths of a small pond. As the shell is shattered and the creature brought to life while emerging in the water, it finds itself in one of the most exceptional and mesmerizing virtual milieus that any videogame has ever tried to produce. With only a vague visual aid, the game’s objective is to make our creature evolve beyond its current shape in order to move into other parts of the territory. To achieve new stages in the evolutionary line, this creature must understand his surroundings and establish communications with fellow living things.

If the player is able to establish contact or to help other beings in need he will be rewarded with a symbolic piece of energy that can be used light up a natural formation of crystals, allowing the character to evolve beyond its current form. While, theoretically, this process appears to be simple, relating with other living entities in this mainly hostile world demands a very keen process of observation. The weakest beings tend to be oppressed by the larger creatures that hit them and feed on them. Others require less linear approaches, such as to be corresponded with by certain stimulus, possibly in specific areas of the map. Learning their behavior is the key-factor to earn their trust, friendship and their gift of live which enables the central character to grow. 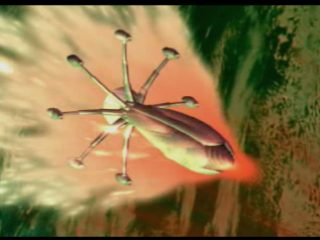 But even as evolution takes place, there are basic needs which must be tend to: in order to remain alive, the creature must also feed, either on plants and vegetables where available or, in dire need, upon the bodies of other creatures, friendly or hostile. This imperative and somewhat cruel aspect of the game was cleverly designed in order to determine the type of player behind the controls: whether he adapts to the “survival of the fittest” environment and kills when necessary in order to remain alive; or whether he remains faithful to symbiotic relationships and finds alternative ways to feed on plants or unfriendly creatures.

Apart from walking or climbing, the creature’s actions are also quite extraordinary for a video game: there is one specific button to urinate, another one to produce sounds and physical motion, or even a button that makes the small animal go to sleep. Learning new context-sensitive actions for each of the available buttons, as well as inventive ways to reuse the initial ones, is a crucial aspect of survivability. One of the most impressive achievements in L.O.L., apart from the very unusual and terribly original gameplay, lies in the visual construction of a different world, one which bursts with unparalleled flora and fauna. The ambiances are raw, disorganized and certainly not designed according to any level formats, rarely functioning according to common sense rules. The player is induced in a state of awe as he progresses through the alien landscapes which can be guided only with the aid of a map in the pause menu. Each area has a unique geological and biological identity, a color and texture of its own that shifts according to the time of the day. 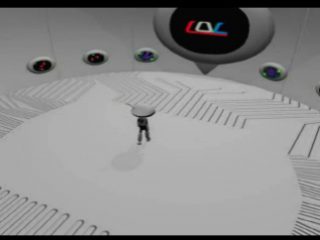 Apart from the concept of symbiosis, Sakamoto’s efforts to make Lack of Love a game can also be distinctly heard in the small, yet unforgettable 13 piece soundtrack that supports the game. Ranging between different influences from classical to new-age, this work emanates the feeling of loneliness and sadness which characterize the evolving character’s pursue, as well as the cold and inhuman dimension of the newfound habitat where the game takes place. His dedication to this project is otherwise shown in the lengths he underwent to lacquer each piece with a unique tone and sentiment: such labor is easily recognizable in his initiative to record a previously composed tune in a real music box cylinder, or to play one of the tracks in a foot-pump organ, an instrument both rare to find and very difficult to play – much like the the game in question.

In spite of the highly ambiguous and enigmatic nature of the game, there exist some unique moments, as the veiled narrative progresses, that enlighten the player as to the purpose of the game: to convey an important and resolute message. By creating an alien environment so deep and richly filled with natural life, Nishi’s depiction of another world is but a paragon of our own worldly affairs and tribulations: the irreparable desire to saturate the world, undressing it of its natural equilibrium, may indeed be a result of this our species’ profound sentiment of loneliness and uniqueness in this incessant Universe. Altogether, the numerous displays of creativity in Lack of Love form a singular content whose implications, deep and thought-provoking, are transmitted through the sheer power of its audiovisuals and gameplay, instead of text, in what is one of the most earth-shattering and widespread initiatives against the decay of Modern Man and the causes of his egotist behavior towards Nature.