This review was originally featured in Indiepocalypse #8. Please check them out! 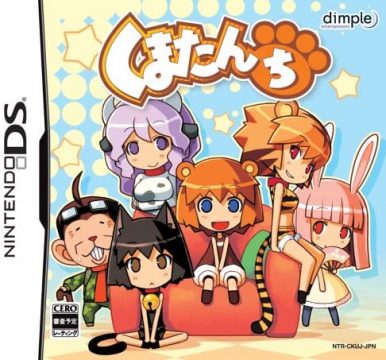 The Onboro Zoo is home to a variety of cutesy anthropomorphic animals, including the bear-girl Kumatan. However, it’s starting to undergo renovation, and its inhabitants are temporarily transferred to Nigiwai Zoo. It’s your job to oversee Kumatan during this period in Kumatanchi (“Kuma-tan ‘n Pals”), an adorable life simulation game. 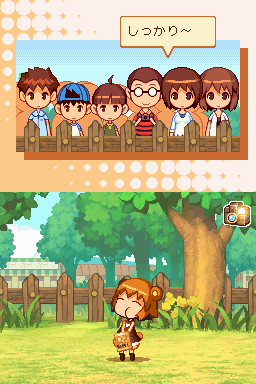 The renovation period is two weeks, which actually takes place in real time, based off the internal clock of your DS. In other words, you’re supposed to check up on Kuma-tan at least a couple times a day to ensure that she’s fed, among other tasks. She largely works on her own schedule, either lumbering around, entertaining zoo guests, or training to get better at her job. During these tasks, you can pat her head to reinforce her behavior, or give her a poke if she’s doing something you don’t want her to do. She has five emotions you need to manage, because she won’t look that kindly on you if you’re too mean. There are also brief interludes where Kuma-tan interacts with some her pals, including Rabi-tan (a rabbit girl who likes black magic), Neko-kun (a moody cat boy), Ushi-oneesen and Tora-oneesan (a cow woman and a tiger woman, both presented as older sister-types), and Saru-jii (a monkey who proclaims he’s an old war veteran).

Kuma-tan earns her keep when performing for zoo visitors, and gets money based on her performance and popularity, but you can also take pictures of her, which can be sold for more cash. Obviously, the more adorable she is, the higher the price. Money can be used to purchase food, or furniture for her apartment, which not only keeps her occupied but can also enhance her training. 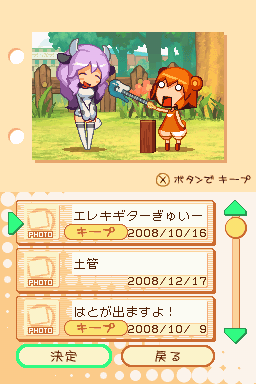 There’s not really much to Kumantachi beyond poking or prodding its protagonist, deciding what stuff to buy or feed to her, or taking snapshots. Rather, it’s a game that you’re meant to watch play out, sort of like a mildly interactive cartoon. Indeed, Vanillaware is largely known for their beautiful character action games like Odin Sphere and Muramasa: The Demon Blade, and while Kumantachi is a decidedly different style, their visual craftmanship remains unparalleled. It’s a joy to watch thanks to the brilliant 3D artwork and animation by Shigatake, the character designer, and looks amazing even on the low resolution DS screen. He’s also famous for the Habanero-tan series of webcomics, featuring a group of cutesy anthropomorphic hot peppers, and the design to Kumantachi is actually based on a doujin game called Habanero-tan House by developer Ashinaga Ojisan. There are even a few habanero-themed food items in Kumatanchi that pay homage to its origins.