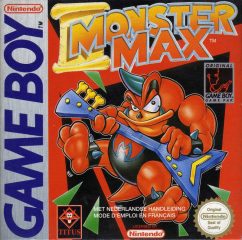 In the vast library of games released for the Game Boy, Monster Max is a game that deserves so much more attention than it gets. For one thing, it has the kind of pedigree that would make competitors seethe with jealousy; it’s an isometric arcade-adventure developed by Rare, who had a reputation in the ’80s for codifying the genre with the likes of Knight Lore, Alien 8 and Nightshade back when they were known as Ultimate Play The Game, and designed by programmer Jon Ritman & artist Bernie Drummond, the two men behind the beloved games Batman for the Amstrad CPC (the first Batman game ever: fun fact!) and Head Over Heels.

But even more than that, Monster Max feels like a send-off to the genre of the Filmation-style adventure games that dominated the 8-bit computer gaming scene: isometric games were made as a work-around for 3D graphics, which were near impossible to render (let alone do well), and so became redundant when 3D became possible on computers and home consoles in the late ’90s. Isometric games still live on as RPGs and strategy games, but the adventure games have yet to make some kind of comeback.

Unfortunately, despite receiving stellar reviews from magazines at the time, Monster Max is barely remembered by history, largely thanks to publisher Titus Interactive’s botched handling of the game; only supplying copies of the game to shops months after it first came out and giving it a very limited North American release. It’s shockingly unfair, especially because Monster Max is a cracking, albeit sometimes very frustrating, puzzler that fans of classic isometric adventures should check out.

You play as Max, a rock-and-roll guitarist whose dreams of hitting the big-time are shot down when the evil King Krond shows up and bans all music on Monster Planet! To find the skills necessary to kick Krond’s butt and take back the music, Max must complete all nine floors of the imposing Mega Hero Academy. Will he be able to do it, or will everyone’s songs be forever silenced?

Monster Max is an isometric arcade-adventure with a strong focus on puzzles, where you are tasked with completing missions (usually by finding a unique item or defeating a special enemy). To reach your objective, you’ll have to make use of the various abilities that Max can acquire, which are assigned to either the A or B button. While this means you can only have two abilities at any time, you can swap one of these for another if you come across their icon and press the button for said power while standing on top of them (e.g. pressing the Jump button while on top of a rubber duck will give you the power to Duck instead).

The overall goal of the game is the get to the top of the Mega Hero Academy. This is done not by beating all three missions on each floor, but by gathering enough money to access the lift to the next one. You earn money by completing missions, finding gold bullions hidden throughout, and retaining as many hearts as possible. This is a really smart idea since it allows for you to tackle missions in whatever order you like, or even skip ones you don’t like if you have enough money to go to the next floor. But you can’t repeat previous missions, so if you’re broke, you’ll just have to go back and try beat the ones you skipped over.

And it’s likely that you will end up skipping over a mission or two when you can, because Monster Max is a very challenging game. There are a wide variety of puzzles, such as platforming, spatial awareness and using your reflexes to avoid traps and enemies, and many of them are devilishly tricky. Be it through tight halls full of enemies chasing you relentlessly, puzzles with initially unclear solutions, or floor panels that collapse once stood on, the game finds all sorts of ways to put players to the test.

When it comes to challenge, there’s a very fine line between being satisfyingly tough and being infuriatingly unfair, yet Monster Max manages to (mostly) stay on the former side. The core gameplay is responsible for most of this, thanks to tight, responsive controls that allow you to quickly move and use your abilities, the variety of abilities that can give you an advantage over the enemies/obstacles, and the number of puzzles that will keep you on your toes. It’s amazing how often it is to just barely clear a room unscathed, and how gratifying it feels every time.

The difficulty is also made less arduous thanks to some intelligent design choices that give the player some leeway. In addition to the aforementioned non-linear progression, you can reset a messed up puzzle by leaving the room and coming back in, you can stand in the doorway and check out the situation without getting damaged by enemies or hazards, you’ll find whatever ability you need to beat that room’s puzzle in the same room or very nearby, to name a few. And if you’re ever stuck on what to do, you can always pop into the pause menu to remind yourself of your objective or what each ability does.

However, there are times when Monster Max crosses the line and becomes maddeningly frustrating. There are some puzzles where the solution is very unclear, and can cause much irritation in trying to figure it out. There are certain aspects about gameplay that are never clearly communicated, which you will need to know in order to clear quite a few levels (for example, holding the Jump button has you jump as soon as you’re on the ground). In addition, the Game Boy’s four-color palette of slightly different greys, combined with the isometric angle, makes it hard to judge exactly where you are in relation to other objects/enemies, which can lead to you getting hurt by accident.

This results in Monster Max becoming a game of trial-and-error, and that would generally be fine if it wasn’t for three design choices: you only have a certain number of hearts (which you lose when hit), the room you’re in resets when you’re hit, and there are no checkpoints. This means that if you run out of hearts at any point, you’ll be kicked out of the level and will have to do it all over again.

There are games that can get away with having limited health and no checkpoints, but this is based largely on how the game works: Mutant Mudds, for example, can do this because its levels are short enough that they can be beaten in under three minutes. Monster Max, on the other hand, has long levels with at least a dozen or two rooms full of devious puzzles that can block your progress at any point, which are exacerbated by these design choices.

What is normally a very challenging puzzler can at times become an endurance session for all but the most hardcore of isometric puzzle fans, and that will make Monster Max a tough recommendation for those who aren’t into difficult games. However, the game does manage to alleviate these frustrations due to the aforementioned design choices and quality gameplay, so that you can get down to enjoying what’s on offer.

And there’s a good deal on offer. There are over 25 levels to tackle, and with each level containing loads of rooms with unique challenges, players will have a lot of puzzles to complete without ever getting bored. This is backed up by well-done presentation befitting the people behind the game.

The graphics are quite good, with big character sprites that make it easy to distinguish Max from the numerous enemies he encounters, a variety of different backgrounds and templates that make each area feel unique and a framerate that manages to hold up well despite what can happen on screen sometimes.

The music, composed by Rare’s then in-house composer David Wise (Donkey Kong Country, Battletoads, Wizards & Warriors), is a fun soundtrack with numerous catchy chiptune rock jams that, with its crunchy instrumentation and harmonizing melodies, will feel right at home with fans of Wise’s 8-bit work.

Monster Max will not be everyone’s cup of tea, owing to how challenging it is; how unfair it is at times, even. However, as a great send-off to a long-dead genre, it is a game that more people need to know about and check out for themselves – if only to experience a classic isometric adventure game that has otherwise gone ignored.