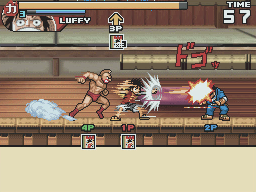 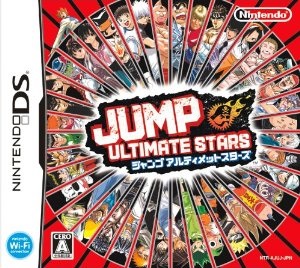 The most prominent feature of Jump Ultimate Stars is the inclusion of new series and characters. The playable cast is nearly doubled. Most of the old content and graphics remain largely as-is. Most of the Naruto cast has changed to match their newer post-timeskip looks and movesets have been tweaked, but most of the characters have not experienced drastic changes. Left at that, it might be easy to call the game an expansion, but it’s actually got enough changes under its hood to justify itself as a sequel.

In Jump Super Stars, the Saiyans of the Dragon Ball franchise changed into their Super Saiyan forms when their Koma size increased. This sort of visual change is added to more characters in the sequel. More importantly, about half of these new transformations are accompanied with a different set of normal attacks as well.

The game runs more slowly than its predecessor. To compensate for this all characters can perform a short dash. Strangely, it also removes the dashing attack that all characters could perform in Super Stars. Instead there are now two different attacks that can be done from a blocking position. In Super Stars, the attacks from block dealt a lot of knockback. In Ultimate Stars, one attack breaks enemy guard while the other forces them to switch characters on a successful hit. 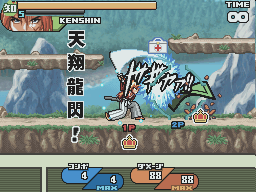 Each deck must now be assigned a Leader. The Leader is played at the start of the match. They also earn double points for every kill they make in a time match and lose double points when killed. It may be an attempt to prevent an over reliance on switching characters – there is no cost for doing so – but it feels unintuitive.

The most significant change is the new Koma evolution system. Now only one-block Koma are collected, no incomplete Serif Koma. There is no need to fit Koma together to get a usable one. Instead, each Help Koma has its own branching evolution tree to unlock its higher forms, as well as other additional content. To upgrade a Koma you need a certain amount of different colored gems. These gems are scattered by hitting enemies in both single and multiplayer. They are also earned from completing missions.

While the removal of the Serif Koma is much appreciated, this system is still imperfect. When the player has beaten the game they will likely still have many Koma to evolve, so there is now a new need to grind for gems. This leads certain players to go online and gather gems from fights instead of participating.

Help Koma are now overhauled into an additional source of passive effects that is equipped to an adjacent character. The simple buffing effects are instead passed to new Support characters. This new use for Help characters means that they can no longer be used as a quick fix for debuffs, they aren’t fully useful when in the wrong place, and they only apply their effect to one character in your deck. They also can no longer boost Support characters, drastically reducing the ability to increase the maximum super meter. However, they also no longer compete with super attacks and Support characters for the super meter, and they offer a far greater variety of effects.

Battle characters have also been given their passive abilities, differentiating them further. Some of these are clearly inspired by the characters’ attributes in the source material: Allen Walker can detect Akuma with his Pentacle Eye, translated in Ultimate Stars as immunity to blindness and the ability to see through the invisibility status. Killua’s immunity to the poison and shock effects match with the torturous training he received as a child. 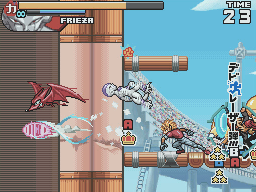 Another neat addition to the Battle characters’ arsenal is the Ultimate Action, a taunt-like move. Most of them serve as a way of filling the super meter, although exactly how to use them varies. Some restore health instead. Others possess more unique combat functions. For example, Dr. Mashirito and Kurama can set up traps. Several characters can power up certain attacks using their Ultimate Actions. Still others have an ability to evade an incoming enemy attack, such as the ninjas from Naruto preparing their Body Replacement Technique.

Battle characters have also been made more versatile through the addition of alternately-typed Koma. In Super Stars, every character can have only one Koma of each size. In Ultimate Stars, characters often have an alternate Battle Koma of a certain size. Besides being a different shape, it is of a different type than the character normally is. However, the special attacks are the same as the normal Koma of that size. This allows the player to more easily cover their weaknesses using a favourite character. It can also prey on opponents’ expectations, leading them to mistakenly switch in a character with a type disadvantage.

Jump Super Stars already included a few features to make deck making more convenient. The player could unlock premade decks and filter the Koma list according to series, size, type, and other attributes. Ultimate Stars improves on this a little; it also allows Koma to be set to L and R, so that they can be activated without use of the touchscreen. While you can send copies of your decks with friends in Super Stars, Ultimate Stars adds the ability to download the decks of online opponents. 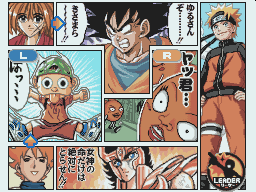 The addition of online play not only increased the game’s longevity, but also fostered its fighting game community. However, online games are susceptible to hackers. Overpowered debug Koma are left unused in the game’s code, allowing hackers to equip their characters with unlimited super gauge.