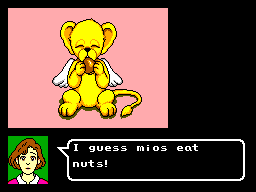 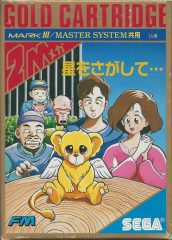 As one of the few Master System/Mark III titles exclusive to Japan, Hoshi wo Sagashite is something of an oddity. It’s one of the few adventure games on a console that often tried to appeal to consumers with action games and platformers, and its concise design makes for a brief game. Instead, it’s a game about immersing yourself in a colorful sci-fi world designed by the legendary Rieko Kodama, resulting in a memorable experience. The text-heavy, difficult to market nature of the game likely resulted in its lack of localization overseas, but an English fan translation is available. The fan translation changes the name of the game to “Story of Mio”, which is more indicative of the game’s content than the translation of the original title, “Searching for the Stars”. It’s also worth noting that the events of Hoshi wo Sagashite take place in the same solar system as Phantasy Star, since tours to planets like Motavia and Palma are advertised at the airports you visit. 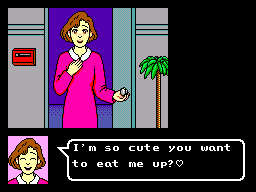 The story is remarkable for how low-key and nonviolent it is – you’ll find no moustache twirling villains or well-hidden conspiracies here. You play as Roy, a pilot who stops at the local shady egg dealer to pick up a gift for his girlfriend Lila. Not long after getting the egg home, it hatches and out comes a Mio, a cute bear-like creature that was thought to be extinct. From there, you’ll slowly unravel the mystery of the Mio species by traveling between planets and searching for any potential leads. There aren’t many characters and most are only there to give you information, but a couple of them are rather morally nuanced for the time, such as the former wildlife dealer named Chaos who seeks atonement for his past actions by hiding the secret location of the Mio homeland.

You interact with the world through a handful of commands: Talk, Look, Eat, Hit, Take, Item, and Move. Progression comes down to using the right actions on the right things, but a lot of the game’s personality and fun comes from trying obviously incorrect actions. For example, you can freely hit any guy you encounter, much to their chagrin, but Roy is at least decent enough to refuse to hit any of the women. If you use the “Eat” command on people, some characters, like Lila and the old woman selling nuts on Helluva, will see it as an attempt at flirtation, a signal that you want to “eat them up”, so to speak. There’s an appreciable variety of outcomes for these instances, and each character has multiple expressions based on their reaction, so it’s rewarding to just try random things and see what happens. It’s even possible to get a few premature Game Overs by doing particularly foolish things, like cracking the Mio egg before it hatches or accidentally revealing the existence of the Mio to an entire planet by visiting a news station. There is a password system to resume progress, as well as a few endings. 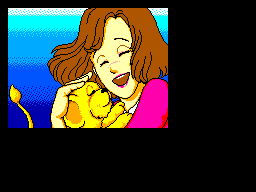 Hoshi wo Sagashite’s only real weaknesses nowadays are its  slow interface and tendency to rely on unintuitive progression, such as requiring you to use the same command on something multiple times until Roy decides to do something different, typical of Japanese adventure games of the era. Thanks to its colorful presentation and relaxing yet compelling gameplay loop, it holds up quite well for anyone who has a place in their heart for the immaculate aesthetic choices and vibes of Sega’s past.