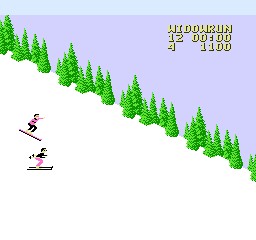 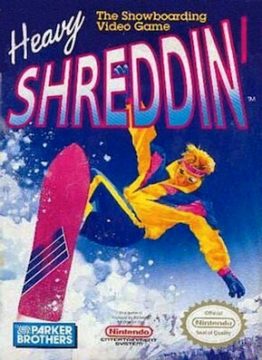 Snowboarding is one of several “extreme sports” that has been subject to video game depiction numerous times. It’s nowhere near skateboarding in terms of nigh-annual Tony Hawk releases, but it’s gotten a fair portrayal once the mid-nineties era of 3D gaming started to take off. Cool Boarders, 1080° Snowboarding, Snowboard Kids, and SSX (one of the only games that were really worth getting at the PS2’s launch) all did their part to popularize the sport of using snow to move fast in a defiance of nature. However, snowboarding games only became prominent during the extreme sports craze of the latter nineties and when it was officially classified as an Olympic sport in 1998. Before it got super-popular, there was incredibly little for snowboarding in the 16-bit era, with only two notable such games on the SNES: Tommy Moe’s Winter Extreme and Winter Gold, the latter being one of only three officially released games to run on the Super FX2 chip. Even before that, there’s very little to say for snowboarding games on 8-bit systems and computers, though Heavy Shreddin’ was a very early example of the genre. An early example, if not a great one.

Your goal is to tackle six race courses, each with three different segments, without stumbling onto your face or breaking the rules… or breaking your face. The first level presents you with a basic “downhill” challenge, which is to reach the goal in the allotted amount of time without getting tripped up by trees or rivers. Next is the “slalom,” where you need to pass through gates and instantly lose if you miss one. This then brings you to the “backwoods” gauntlet, where you have to reach the cabin at the end while dealing with more trees and rivers, fences, large signs, ice ponds, parked trucks, and several other obstacles.

The second level then takes you to the “halfpipe,” which works quite differently from the other modes. You need to hold up and down to gather speed, and when you reach the edge of the halfpipe, you’re prompted to either jump or pull off one of four tricks mapped to the d-pad, but you’ll have to use trial-and-error on those tricks if you don’t have the manual available.

After this is the “moguls” race, which is timed like a downhill race, but your main danger are snow bumps that force you to keep jumping. You then do an even tougher “backwoods” challenge before returning to a “downhill” segment on the next stage, and the latter two pairs of stages follow this pattern.

Do beware, as before you undertake the second and third segments of a course, you need to avoid being barged over by jerkass skiers, skaters, sledders, and the occasional rogue deer (this deer has slightly disturbing white eyes that stare at you both in play and at the game over screen).

Heavy Shreddin’ isn’t all that hard to understand, but it is difficult to play thanks to some dicey obstacle placement and iffy controls. If only the screen scrolled slower or the obstacles were better telegraphed, you wouldn’t be clonked by half of the things that are likely to knock you down. Things are somewhat fair until you get to the backwoods, where it matters very much how far up or down you are on the screen to avoid the next deathtrap. You’re doomed if you’re on the bottom of the screen when you need to jump over a waterfall, which requires you to be at the very top to jump on a platform bridging the gap. Some of the hazards need to be found out through trial-and-error, but you only get four lives and no continues. While you do get an extra life for beating a course (and there are codes for ninety-nine lives and selecting your preferred level), it will still take a lot of practice and advance knowledge to survive all six courses.

The board control can also get in the way; while it’s pretty straightforward at top speed, it switches to an odd alternate system if you slow down enough where holding up or down pivots your boarder sideways. This is only really useful for the slalom mode, but likely to be cumbersome anywhere else. 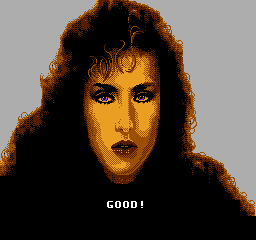 Heavy Shreddin’ is just a relatively mediocre sports game that’s too tough for its own good and relies a bit too much on rote memorization than on-the-fly skill, but there is one inexplicable element which nudges it slightly towards that direction. Whenever you beat a course, you are “rewarded” with a photorealistic close-up of a dark-haired blue-eyed lady with a brief exclamation like “cool” or “awesome.” Something about her blank expression and overly detailed artwork is incredibly off-putting, thus seeming more like a nightmare right out of the uncanny valley than a legitimate reward.

In addition to the creepy virtual woman, beating the final course only gets you an additional image of a trophy before looping back to the game’s beginning. Many would consider that pursuit not worth it, so you have to ask yourself if Heavy Shreddin’ really is worthy of being played for any extended amount of time. With so many better snowboarding games available today, the consensus on its worthiness can best be summed up as “not really.”