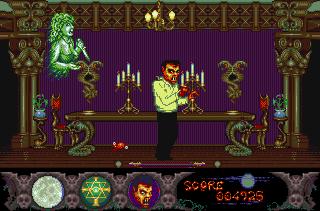 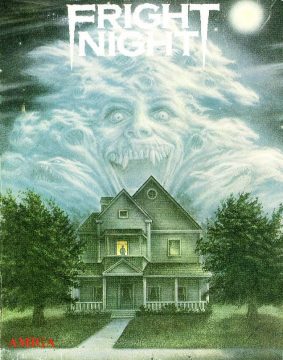 Fright Night was a cheesy 1985 horror movie about a teenager who discovers that his next-door neighbor is a vampire, and first tries to convince the people around him to believe that, and failing that to take out the creature on his own, getting the help of a crooked “paranormal investigator” type TV show host. The film also got a remake in 2011, which judging by the trailer takes itself way more seriously than it should.

So how does the video game adaption fit in there? Not very much. You take on the role of the vampire instead, who has to go through his mansion each night in order to drink the blood of several intruders. Why they keep coming to the house is anyone’s guess. The concept of playing the blood-thirsty villain might have sounded exciting for a 1988 marketing, but the execution isn’t too hot. The vampire just walks around the rooms, and when he spots potential victims, he has to run towards them, and then sucks their blood automatically. They throw all kinds of stuff at him, but from drinking their blood he gets his health replenished probably more than they could ever take away from him. The real danger are the various ghosts that appear from the second night onwards, and for whatever reason fight against the supposed master of darkness. 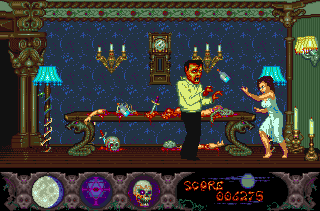 Dodging enemies is a real pain, though. To jump or duck, the fire button has to be held while pressing the joystick in the appropriate direction, slowing down your reaction time. Enemies also drink your health in one big slurp as long as they touch you; there’s no such thing as invincibility time. While it’s usually not too hard to go and kill all the intruders, getting back to the vampire’s coffin to conclude the night is pretty much impossible from the third night on. It’s possible to replenish health by standing in front of said coffin, but first the nights – represented by a moon passing through a circular display – are so short that waiting for the excruciatingly slow healing process is pretty much never worth it, and getting back from the higher floors just to get healed only results in more damage from the flying ghosts.

The game ultimately is also very boring, as there’s just nothing more to it as has been described so far. The sprites big and nicely animated, and some of the backgrounds very well detailed (while others look like shit), but the graphics got nothing that can save such a dull experience. The “music” by David Whittaker has been praised a lot in contemporary reviews, but it’s just a bunch of repeated screeching sounds that might have had some effect if it was used with any kind of direction to match the action on screen, with short samples from famous spooky music spliced in randomly.