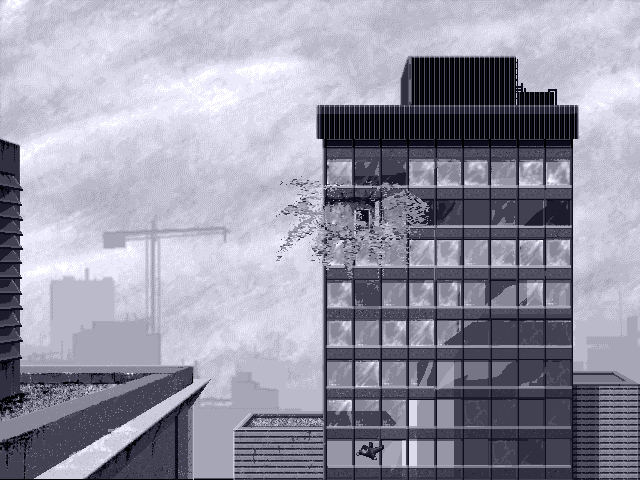 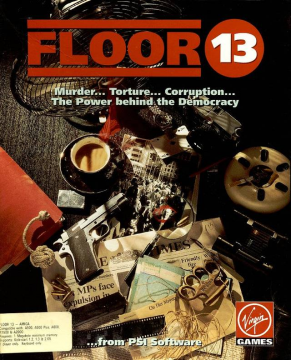 In Floor 13, the game makes the player control an immoral, corrupt bureaucrat who orders assassinations, spreads disinformation and works with only the interest of his political party in mind. Reviews at the time criticized the game for this, but of course, anyone who knows the simple fact that “player character” is not the same as “player” just like “narrator” is not the same as “writer”. They will realize that this is actually this game’s advantage, as it intentionally makes you control a villain, not a role model. The game’s actual flaw is that it can’t always maintain its theme of a cynical but realistic portrayal of espionage, getting into some rather outlandish conspiracy theories instead.

The game opens with an introductory text about the nature of democracy placed under what appears to be a display of an elevator riding up to the usually inaccessible thirteenth floor, followed by a short animation (the only one you’re going to see as everything else is static pictures) of a man falling out of a window. Soon you’ll learn that he was a Director General of (fictional) Department of Agriculture and Fisheries and that after this terrible ‘accident’ you’ve been chosen as a new Director General. Spoiler alert: you won’t do anything related to the government’s policy on farming over the course of the game. 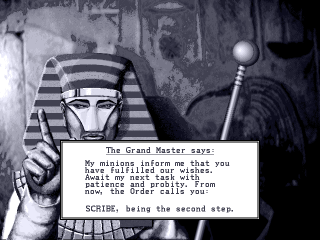 As you’ve probably guessed, Department of Agriculture and Fisheries is just a front for a much more sinister operation. Indeed, in Floor 13 you’re actually controlling a secret organization of spies, assassins, torturers and propagandists. You answer directly to an unnamed Prime Minister so while you will do a fair share of actual covert-ops (fighting against terrorists, drug traffickers, a serial killer etc.), you’ll mostly try to cover his ass so that your party won’t lose the next election. No, it’s not the most optimistic interpretation of contemporary politics and it feels more like a 1960s/1970s conspiracy thriller like “paranoia trilogy” by the director Alan Pakula (Klute, Parallax View and All the President’s Men) than something made in 1990s.

The game’s presentation is also anachronistic, although this time it aims for a slightly earlier period as all the black-and-white imagery (Floor 13’s only use of real color is on the title screen) seems to be a nod towards film noir genre. In this respect, letterboxing and reduced color palette in the Amiga port actually serves the game, despite technically being a downgrade.

Floor 13 is at its heart a resource management game. Number of agents trained to perform certain tasks and department’s funding are limited, but (with a possible exception of the infiltrators) that’s probably only going to be a problem in the early game as your department will be expanded every month. The real resources you’re going to care about are your party’s popularity and a hidden variable which shows how suspicious your actions are.

Managing popularity is fairly straightforward (although several missions require a bit of trail and error): if you fail to solve a problem, your opponents will get new voters. Losing some points in the polls is sometimes inevitable as some missions start with bad news hitting the press, there is however a simple way of regaining the public’s trust: spreading disinformation against the opposition, anti-government groups (be careful when infiltrating them as if you manage to convert them to your side before a smear campaign succeeds you can harm your party instead) and dissidents.

The suspicion level is dependent on how you decide to approach various situations. Actions like wiretapping, quiet searches and disinformation are safe, although in many cases not enough to solve a case. Kidnapping and assassinating people will raise the suspicion level and so will ransacking their houses – but you need to do this from time to time as the success of a mission might depend on interrogating or killing suspects or taking certain items from them (which does not happen in a quiet search – your agents will leave the location as it was before, even if they find stolen documents, drugs or explosives there).

Failing to keep your party more popular than their opponents will result in your character being fired by the Prime Minister. Fortunately, you don’t need to be in the lead all the time – it’s enough to be winning during a ‘target date’ every three weeks. You’re not so lucky when it comes to your suspicion level though – if you get too troublesome, an assassin known as Mr. Garcia will make sure that you suffer the same fate as your predecessor. This is what’s most difficult (although not that hard once you play the game for a few hours) about Floor 13: you never know how suspicious you are and can never be quite sure that safe actions are enough to avoid serious political repercussions. Eventually, you’ll either take big risks to solve a case or let the popularity suffer to avoid getting killed.

One of the most interesting things about Floor 13 is how it’s actually played. You quite literally control a Director General – you never order units on the map or take control of a spy for an action sequence. Instead, each day you go to your office and fill in a lot of paperwork, occasionally visiting different branches of your department (usually the one tasked with interrogation as ordering torture and disposal of bodies is the only thing that can’t be done from your office). You’re always the man behind the curtain – giving orders and reading reports but never stepping in to directly participate in or even observe the action. 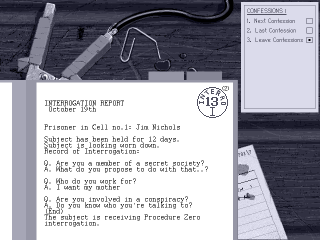 In this respect, this game seems to be almost a spiritual predecessors to an indie hit Papers, Please – a depressing (though not without some dark humor), immersive game about unethical political practices which places the player in the shoes of a bureaucrat. There are notable differences though – possibly the most notable being that the protagonist in Papers, Please was more of a victim of a cruel system than someone responsible for it while it’s hard to see the Director General as anything other than a manipulative villain (even if he’s not completely in control of everything and his life can always be ended by Mr. Garcia).

The other big difference is the setting. Papers, Please took place in a fictionalized communist dictatorship while Floor 13not only focused on the other side of the Iron Curtain but also made extensive use of real-life locations and organizations. Suspects live in actual British cities (with various places – especially underground stations – in London appearing in several missions) and belong to actual 1980s/1990s organizations ranging from RSPCA to Red Army Faction (although there are fictional ones like The Albanian World Domination Movement and The Moral Righteous as well). Surprisingly, the parties are labelled only as “us” and “them”, although it’s quite obvious that they’re supposed to be Conservative Party and Labour Party respectively (fortunately, while its sympathies seem to lie on the left side of the political spectrum,the game never gets on the soapbox to tell you whom you should support). 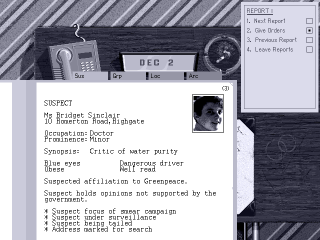 Unfortunately, the game’s far from perfect. From the pure gameplay perspective, there is an issue of lack of balance: the missions are given to you randomly and it’s not impossible to get many difficult ones in the beginning, with your department too small to handle them and there is not enough popularity built up for your political career to survive failure. Also, the organizations don’t persist from mission to mission – you might manage to neutralize or even convert INLA in February only to have them kidnap a member or royal family a month later. It’s a relatively small oversight but it can ruin the immersion.

Floor 13’s biggest problem doesn’t come from its procedural generation though – the biggest immersion-breaker comes from a strange artistic decision. For some unexplainable reason, the game’s developers decided that their not too unrealistic (though more in a ‘it’s not impossible’ than ‘that’s how our government works’ way) look at the darker side of politics needs a subplot about the protagonist being a member of a secret society that traces its roots to ancient Egypt. The Secret Masters of Thoth will occasionally give you additional missions ranging from making sure that their candidate will become a minister to killing aliens who took human form. It’s a good addition from the gameplay standpoint as finishing those missions might require acting in suspicious ways and harming your party at the same time and completing them unlocks an alternative ending but it doesn’t fit the mood and theme of the game. The rest of Floor 13 is paranoid but it’s not “mysterious cults fighting aliens” level of paranoia.

Floor 13 looks great even today thanks to its above-average art direction and film noir stylization. Of course the game’s mostly made of static pictures – and those generally age better than old computer animations – but given the mood, the subject matter and the menu-based gameplay it doesn’t really suffer from this. The same can’t be said about the music though. It’s not that it’s bad – it’s that it barely exists. There is music when you meet the Prime Minister or Secret Masters of Thoth, when your department gets expanded and during the intro, endings and game over sequences – and that’s it. Rest of the game will be spent in complete silence, without either soundtrack or sound effects. This might be intentional to highlight the game’s quiet, slow-paced nature but I’d personally prefer at least some non-distracting music in your office.

The game was released on the PC (it’s a DOS game and it won’t run on modern Windows systems without DOSBox) and Amiga. Those are generally the same, even though the graphics on Amiga are grainier due to a reduced color palette (although, as I said earlier, this might actually work in their favor), there is no intro and the load times are quite long. According to Wikipedia there’s also an Atari ST version but there are no ROMs or screenshots available, nobody is selling it and there’s no mention of it outside of that article so it’s safe to say that it’s probably a mistake and no version for systems other than DOS and Amiga exists. David Eastman, the game’s designer, is currently working on an improved remake though. It’s in early alpha stages right now so it’s difficult to tell what will become of it.

Floor 13 is a unique but flawed title. It’s also fairly short once you learn the general strategy for the most of missions. Still, it’s worth playing for a different take on a popular espionage theme as well as its great atmosphere, even if the game itself can’t maintain it all the time and sometimes goes too far with paranoia. 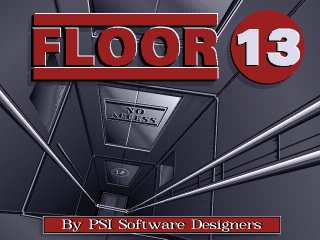 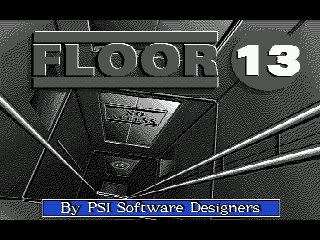 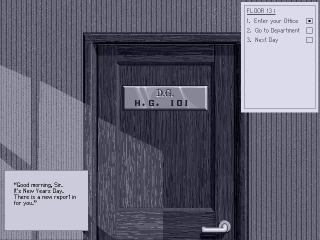 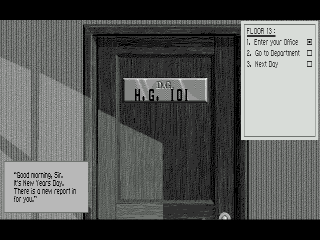 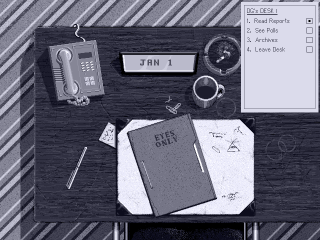 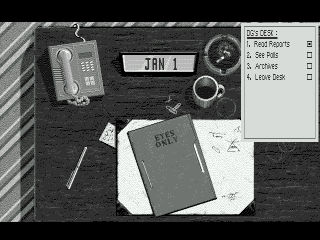 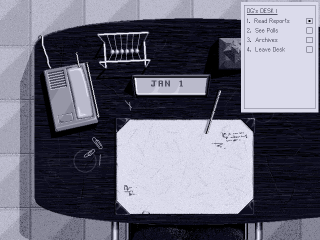 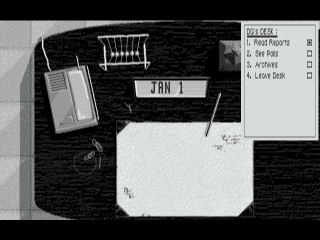