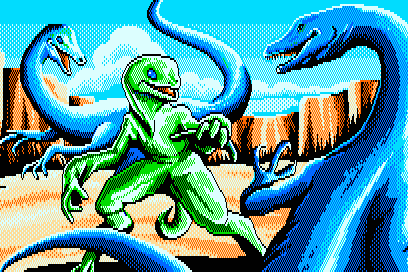 Evolution may be one of the most important ideas in the history of science, but it’s tricky material for a game. It occurs at a geological pace, compounding slowly and autonomously from the smallest results of random chance. It does not necessarily produce stronger or more interesting life forms, but merely ones better suited to their environments. All of this is at odds with the experience of playing a game; a player wants to frequently make meaningful decisions rather than find themselves totally the mercy of the game environment, and to experience a feeling of growth directly related to the consequences of their decisions. The games that embrace these parts of evolution often relinquish their claim to the title of “game,” becoming god-games or software toys like SimLife, Evolution: Seventh Cross, Creatures, and Darwin Pond. Other games, including the successful Pokémon and Spore franchises, attempt to capture the wondrous diversity of life without worrying too much about the exact mechanism that produced it. 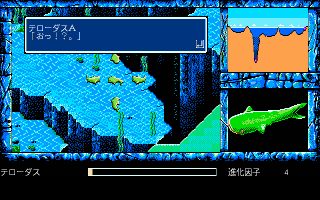 So make no mistake, 46 Okunen Monogatari (4.6 Billion Year Story) is not really about evolution, but it does let you explore how cool the variety of life on Earth is, placing you in the role of a creature with the ability to intelligently design themselves. Though Westerners may know the series for the SNES action-RPG E.V.O.: Search for Eden, the series began with an overhead RPG, 46 Okunen Monogatari: The Shinka Ron, released only in Japan on the PC-98. They both take place in explicitly creationist and anthropocentric worlds, your creature taking a role as the mortal servant of Gaia, the goddess of the Earth. By defeating the creatures around you, you earn points you can spend on evolving into something stronger, faster, or tougher, at your discretion. As you become a stronger and more advanced creature, all the way up to a human (or perhaps beyond) you complete quests for Gaia and help her save the planet. However, you’re not alone in receiving Gaia’s divine favor and assistance in evolution; some extraterrestrial presences begin to meddle in the evolution of the rest of Earth’s creatures… 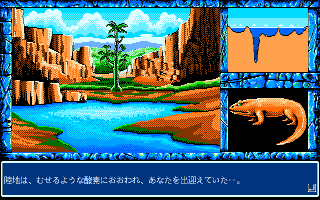 You awaken as the most primitive possible fish, not entirely sure where you came from but integrating well into a shallow village of simple jellyfish, anenomes, and elder fish. However, once a strange light begins to sicken the others, they blame you, the outsider, and kick you out of the village. The surrounding sea is hostile, and there you must struggle and evolve to survive.

46 Okunen Monogatari: The Shinkaron (4.6 Billion Year Story: The Theory of Evolution) is a fairly simple turn-based RPG, with first-person battles a little simpler than the Dragon Quest games. The battles are primitive, usually ending in seconds – and that cuts both ways. You can attack, use your creature’s various skills, or try to run away. No armor, no potions, just you and whatever limbs you have against some animal trying to eat you. And if you outlast your opponent, since battles in The Shinkaron are usually wars of attrition, you survive a few evolution points richer.

Instead of leveling up in a straightforward fashion, you can spend evolution points improving one of four statistics: strength, resistance, stamina, and intelligence. Strength and resistance determine how much damage you give and take; stamina increases your maximum health. Intelligence determines the effectiveness of the essential “Rest” skill, which can be used in battle to restore health. Given how simple the battle system is, all of these statistics feel equally beneficial; each one helps you survive longer, or end a fight more quickly. Evolution points are never in short supply, so you grow at a rapid and satisfying pace. 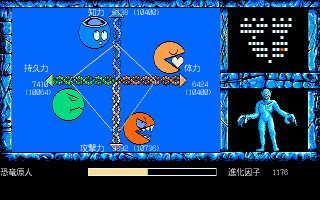 Here’s the hook: When you raise a stat to a certain threshold at the end of the chart, you evolve into a different creature. Beginning the game as the weakest fish, raising your strength to a sufficient level will cause you to evolve into a fish with a similarly puny body, but fiercer jaws. Each time you evolve in this way, you traverse a web of about 12-50 creatures from the current era, apparently largely based on real evolutionary trees. When you evolve, the game also gives you some information about your new creature, including its size and when it lived. New creatures gain new skills, making them more effective in combat. But the greatest appeal of the evolution system may just be aesthetic – it feels badass to finally become the shark in an ocean full of guppies, or the T-Rex striking fear into your enemies’ hearts. 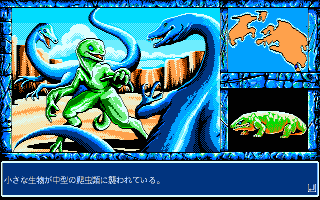 Trying to evolve strategically can be a little frustrating. Each statistic corresponds to a cardinal direction, and some of the time, evolving with that stat takes you in that corresponding direction on the evolutionary map… but it’s not always predictable. A lot of the time, alternating between evolving different stats will have you simply evolve into the same two adjacent creatures over and over. The number of times you can evolve in a given era is limited by a maximum value for each stat, so this kind of evolution limits the amount of the evolutionary map you can see in one playthrough. It’d be nice to see more consistent logic in the sequence of evolutions.

But when your creature is right at the edge of the evolutionary map, evolving with the wrong stat will evolve you “off the map” and trigger a joke ending and a game over. Some of these failed evolutions are simply too weak to survive – dinosaurs unable to survive the cold of the Ice Age, huge marlins caught by humans for sport, etc. Others are powerful, yet unsuited to the task of adventuring across the world and completing the game’s quests – a humanoid fish worshipped and given decadent tribute by the Egyptians, for example. 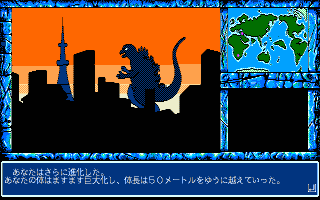 The story takes place in six eras: ocean, reptiles, early dinosaurs, late dinosaurs, pre-modern, and future. During each era, you explore the Earth and find small animal villages, completing various quests and struggling to survive. A pod of dolphins in an ocean cave warns you of the high water pressure in a nearby trench, which you can only survive with high stamina, so you leave to defeat enough fish to increase your stamina and survive the crushing depths. At the bottom you meet the goddess Gaia, who tasks you with helping her to save the planet. Throughout the game are shining spots on the ground where Gaia gives you encouragement and points you in the right direction. At the end of each era, Gaia helps you to evolve into a primitive version of the next era’s dominant life form. 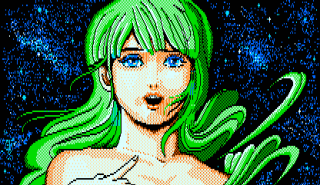 The goddess of the Earth, and your source of guidance throughout the game. She manifests herself in human form at the bottom of the ocean, then in space at the end of the game. Elsewhere, she speaks to you at various glowing spots throughout the game, where she helps you evolve into the next era or travel through time to avoid mass extinction. 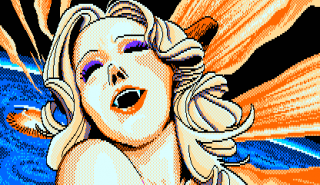 Towards the end of Chapter 4, you meet Lucifer, who takes the guise of a sort of vampire Marilyn Monroe. Her influence corrupts the civilizations you meet throughout the game, from turning the dinosaurs into gelatinous slime beings to hollowing and decaying the once-vibrant environment of the Moon. To spite Gaia and display her power, she sends down meteors to wipe out the dinosaurs. She is the game’s only boss, fought first in a face-melting human form and then in the form of a colossal winged spider. 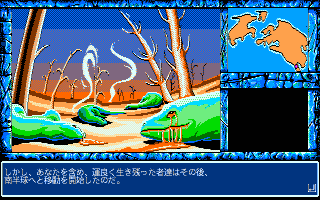 Even though you’re the destined one, chosen by Gaia to save the planet, your most pressing concern is mere survival. Near the end of Chapter 4, a gang of five T-Rexes are blocking your path, and you ask a nearby village of triceratops to help you. They line up against the T-Rexes, and fight a hopeless battle against them. You can try to help out your allies, but even with the highest possible stats at this point in the game, you cannot hurt any of the T-Rexes. Rather than fight an epic battle to save the peaceful dinosaur villagers, your only option is to quietly walk past them all, preserving yourself and leaving everyone else for dead. This feels a little anti-climactic when you’ve been spending the whole game growing stronger, ready to take on anything, but it subverts your expectations in an interesting way, demonstrating your insignificance.

For all its encyclopedia entries and apparent adherence to evolutionary and geological history, the game still embraces plenty of bizarre fantastical elements which increase as history proceeds, apparently due to the malevolent influence of Lucifer. You meet a race of reptilian aliens from the Moon called the Lunarians in Chapter 2, who eventually come to rule the continent of Atlantis; you enlist the help of a massive cave dragon to remove a stubborn brontosaurus from your path. Chapter 5 is the most bizarre, granting equal rule of the earth to cavemen, mammoths, lizardmen, horned demon children, flute-playing dinosaurs, goblin chieftains, dwarves, and more. A brief final chapter takes place in a bleak future ravaged by climate change, in which you, the leader of a space-faring elf civilization, must battle the massive winged spider Lucifer, newly emerged from the moon. 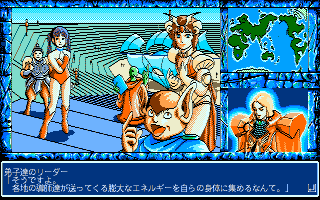 Behold, the destiny of humankind!

The Shinkaron‘s graphics are fairly standard for the time, succeeding mostly in being clear and distinct rather than flashy. The creatures are portrayed in a fairly unadorned, scientific way, but some of the creatures just look dopey, especially among the fantastical creatures of Chapter 5. The music is catchy and appropriate, composed by Dragon Quest composer Kouichi Sugiyama. Two overworld themes, one lonely and one heroic, stand out in particular.

Fortunately there’s an English fan translation available for this game, but when played in its native form, it is decently playable for a non-Japanese speaker. All the game’s quests are solvable in some combination of talking to everyone and raising all your stats, and the battle system is forgiving enough to experiment with skills without knowing exactly what they do.