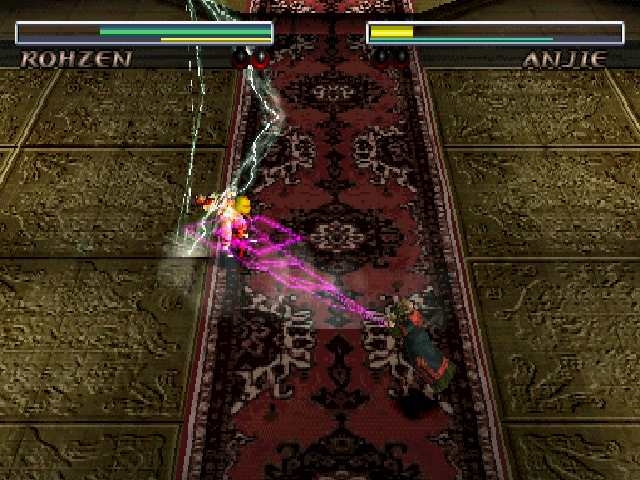 Throughout the 80s and 90s, Koei were known solely for their countless historical strategy and simulation games such as Nobunaga’s Ambition, Romance of the Three Kingdoms, and Uncharted Waters (to name a few). However, they wanted to expand into other genres, and Omega Force was established to get that started. Before they came known as the Dynasty Warriors studio, Omega Force created a handful of titles such as proto-cover shooter WinBack: Covert Operations, the action adventure game Enigma, and Destrega: a simple, but interesting 3D fighter with some cool ideas.

Long ago, the country of Zamuel was visited by powerful beings known as Strega, who blessed humans with magical Relics that allowed them to use similar powers. But over time, the humans became overambitious and set out to conquer the world, eventually resulting in a terrible war that scarred the land and its people. A thousand years later, a few of these Relics were rediscovered by the Ipsen Empire, who ordered their general Zauber to use them despite the protests of the Strega’s descendants. The Empire was wiped out in another war, leaving Zauber to take control as Prime Minister and hunt down the remaining Strega. It’s up to the descendants and members of the resistance to put a stop to him. 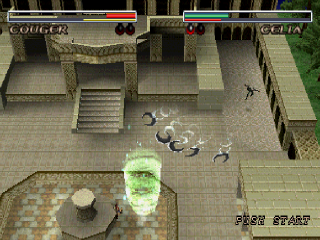 Instead of focusing on close quarters fisticuffs, Destrega places its emphasis on long-ranged combat involving energy attacks hurled over a fully 3D battlefield. You have three types of attacks, which correspond to a button and are signaled by the character saying a certain phrase: a quick attack (press Square, “Tidu”), a strong attack (Triangle, “Est”), and a spread attack (Circle, “Foh”). Below your health bar is an energy meter, and using any attack consumes a third of that meter.

These operate on a rock-paper-scissors basis, so Tidu beats out Est, Est beats out Foh, and Foh beats out Tidu if you both fire an attack at each other. You can activate much stronger attacks in two or three button combinations, either strengthening single attacks or combining the properties of different blasts, though at a greater cost of energy. In addition, you can power up your abilities with the energy by pressing one of the buttons as you dash around the place, block attacks or jump into the air, which offers plenty of defensive strategies in the moment.

Your energy will recharge over time, but if you’re caught without any, you can rush up to your opponent and pull off some melee attacks. Up close, the attacks change to weak combos, a strong attack, and a dodge counterattack with the respective button prompts. It gets a little clunky here, mainly due to how easy it is to get stuck on the other end of a combo, but it nicely punctuates the moments between madly running about and blasting each other.

There’s a lot to consider when you’re in the middle of a fight, but it’s made accessible to anyone by how simple inputs are. There aren’t any complex or character specific combos, though the specific attacks, variations and basic stats offered by each of the twelve characters vary a good bit. 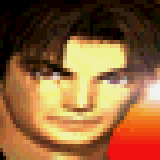 A hotheaded teenager who serves as the central protagonist. He’s an all-rounder in terms of speed, damage and range, so his attacks will do the job in just about any context. 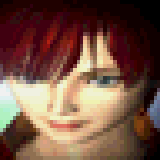 A brave, level-headed woman who helps Gradd out in the early game. She uses the element of wind to attack enemies from a distance and is the fastest character, making her good for evasive play. 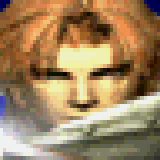 A stoic soldier formerly of the destroyed Ipsen Empire, he now leads the resistance against Zauber. He uses his twin swords to deliver strong attacks, though he suffers from being rather slow. 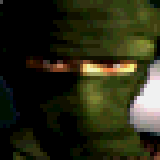 A reserved ninja from a distant land, serving in the resistance. He doesn’t use energy blasts, and relies on a variety of shuriken and kunai as well as his high agility. 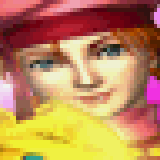 A cheeky teenager, she’s the last remaining member of the Ipsen royal family. Her attacks are represented by giant glowing icons based on the PS1 controller buttons, so you’ll be flinging Squares, Triangles and Circles at your opponents. 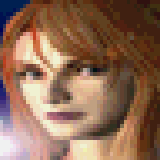 A determined woman on the search for her father’s murderer, when she’s not minding her cousin Anjie. She uses ice spells that can be used to chase after or trap opponents. 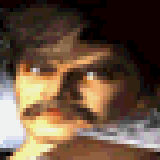 A legendary warrior who once served in a war many years ago, he now wishes to live peacefully with his son Reyus. His fire attacks have a potentially short range, but are quite powerful. 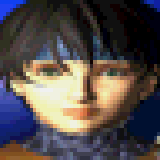 A young boy who lives with his father Doyle, suddenly brought into the fray for his special powers. He can use the power of water to create blasts that home in on their opponents. 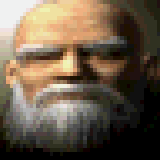 An old man who knows much about the ways of the world, he helps Gradd and Celia on their way early on. His lightning attacks are slow but have a wide range and hit hard. 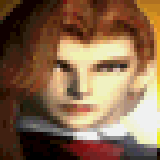 A loyal follower of Zauber. He can weaponize light itself and use it in a variety of ways, with an emphasis on speed rather than effective range. 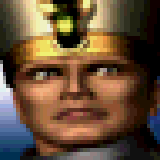 An arrogant general who enforces Zauber’s will. His energy attacks have basic patterns that are easy to avoid, so it’s best to attack opponents up close and personal. 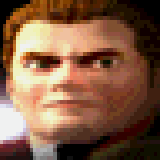 An ambitious tyrant who serves as the central antagonist. He can channel the powers of darkness to unleash devastating attacks, and is also an all-rounder in stats. 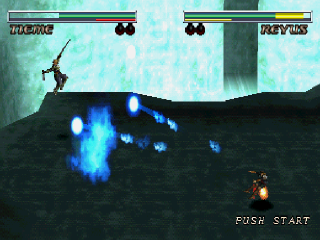 That said, some characters such as Milena and Zauber are naturally more powerful than others, which throws off the balancing a fair bit and makes playing as certain characters like Anjie and Reyus noticeably more difficult. However, there’s enough variety offered by the characters’ abilities, the many attack combinations you can create, and the stage designs that everyone has a chance to shine.

The stage designs don’t offer the usual backdrops and flat floors, but instead give you multiple elevations, buildings and debris that can serve as cover, and hills that can block ground-tracking attacks depending on what direction they’re fired. This provides an extra degree of strategy, making fights even more unexpected and exciting.

However, unless you’re playing against another player, this can be hard to appreciate at first because the AI isn’t very intelligent. Unless you’re playing on Hard, your opponent will run around mindlessly and throw attacks every now and again, only occasionally making use of certain tactics or blast combinations that you’ll have to be careful about. Combined with the Special Attack you can pull off by pressing all three attack buttons in any order, it’s very easy to plough through fights until you come up against some of the stronger characters.

In terms of modes, the selection is pretty standard for fighting games of the day. You have an “Battle” mode where you’ll fight nine opponents, an “Endurance” mode that pits you against an endless onslaught of foes, a “Team Battle” mode where you can fight with teams of up to six characters (though this plays out as a series of fights with slightly replenished health for the winner), “Time Attack”, “Versus”, and “Practice”.

Where things get interesting is in the “Story” mode. The story is presented as a series of fights interspersed with lengthy in-engine cutscenes that tell the story of the struggle of the Strega and resistance against Zauber’s forces. A great deal of effort has gone into these cutscenes, which feature custom animations and camera angles, unique locations that don’t show up anywhere else, and fully voiced characters. In a way, it feels more along the lines of fighting game story modes from the early 2000s onwards, and is admirably ambitious. 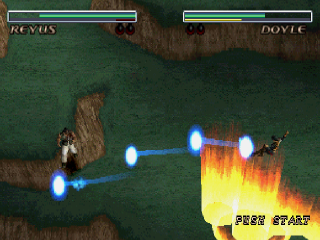 However, there are a few drawbacks in the execution. Mechanically, the fights only last a minute and you only play as roughly half the cast, so you don’t have the chance to better understand or appreciate the gameplay. Cutscenes are comparatively much longer, sometimes lasting around 10 minutes before you get another chance to fight, and you can’t skip them. The pacing suffers from regular awkward pauses, and the English voice cast feels a bit too stilted in their delivery despite their earnest performances. It’s very much a mode worth checking out after getting to grips with the game, and not as your introduction.

Regarding its visuals, Destrega impresses despite an initially unremarkable art direction. The framerate remains consistent even with all the onscreen action, and it does a very good job at making sure that you’re able to see where you and your opponent are at all times. The camera zooms in and out depending on how close you are, pieces of geometry that would otherwise block your view disappear, and all the characters are easily identifiable alongside their attacks, making it easy to understand no matter how hectic things get.

Meanwhile, the music does a decent job at adding to the mood with a selection of rock tracks composed by Kenji Nakajo, Kaori Nakabai, Michihiko Shichi, and Masayoshi Sasaki. However, there’s only eight tracks for the entire game, so they end up getting quite repetitive after a while. The sound design provides a variety of different noises for the attacks and plenty of vocal barks from the characters, which altogether sound pleasant if rather forgettable.

Despite reviewing fairly well, Destrega didn’t sell particularly well and has largely faded into obscurity. However, its philosophy of pulling off a variety of attacks with simple inputs inspired a similar stance to be adopted with the Musou-style gameplay that debuted in Dynasty Warriors 2. 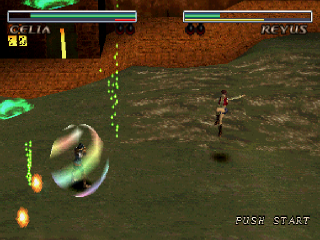 The majority of the English voice cast have only acted in Destrega (perhaps under psuedonyms), but one notable exception is the voice of Tieme, James Arnold Taylor. Since Destrega, he has gone on to be an extremely prolific voice actor in the world of video games and animation, and is best known as the voice of Obi-Wan Kenobi in most Star Wars spin-off media since 2003, Ratchet from the Ratchet & Clank games after the original, and Tidus from Final Fantasy X.

Clearing the Arcade mode as any character unlocks a bonus costume that you can wear by pressing Start to confirm your selection. The costumes are based on the characters featured in Omega Force’s previous fighting game, the original Dynasty Warriors, and feature a mix of Destrega characters wearing DW costumes and brand new character models.

An interview with Destrega programmer and Dynasty Warriors producer Akihiro Suzuki, who mentions how Destrega inspired the combat from Dynasty Warriors 2 onwards: https://web.archive.org/web/20060410000346/http://www.gpara.com/special/interview/muso/20060331/index.htm

The very dedicated and detailed pages on Destrega and its characters from the Koei Fandom wiki: https://koei.fandom.com/wiki/Destrega