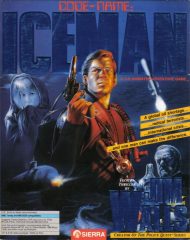 Sierra’s Police Quest series was a curious monster. Based loosely on the real-life exploits of retired cop Jim Walls, they played against popular media by portraying police work like it really is, full of rote and boring procedures, all in the name of the law. Codename: ICEMAN, also designed by Jim Walls, pulls a similar maneuver – it takes the spy thriller genre, applies a dose of “reality” to it, and manages to suck most of the fun out of it.

The story opens with Lieutenant Commander John B. Westland, a military officer on leave in Tahiti. After soaking in some rays, resuscitating a girl with CPR and hooking up with some random chick, Johnny gets called into duty. Turns out that the Russians have captured an American ambassador because of a mounting energy crisis, and, due to his purported skills, Johnny is sent in to retrieve him. This is accomplished by a stealth submarine, harbored in Pearl Harbor, which must be guided through the arctic waters to the island of Tunisia, all the way on the other side of the globe.

The plot is typically generic, with its Cold War paranoia being its only rather unintentional charm. The big twist – that the chick you nail at the beginning is actually a secret agent you end up working with – is introduced before the mission even begins, thereby ruining any sense of drama. The writing is terrible. “MERCY, MERCY, you think to yourself”, the game says as you learn of your hookup’s secret job. You would never hear James Bond say, or think, anything like this, ever, because it would instantly make him sound an eighty year old woman on the verge of fainting from the vapors. The rest is merely boring or charmless. The game uses the SCI0 interpreter, with 16 color EGA graphics and mouse control for movement, although it still uses a text parser.

Your mission is way more complicated than simply sneaking in, shooting some dudes and sneaking out, because Johnny is also put in charge of piloting the submarine that will infiltrate enemy territory, as well as taking on a bunch of other duties. Indeed, Codename: ICEMAN is maybe 40% adventure game, 30% submarine simulator, and 30% reading comprehension test. The structure goes something like this: Helm the submarine, plot a course, helm the sub again, decode some secret messages, fix a piece of machinery, helm the sub again, get into a battle with an enemy warship, helm the sub again, decode another message, helm the sub, and then get in another battle. Then you’re finally free to infiltrate the enemy fortress and actually do something vaguely exciting.

The opening adventure segment is remarkably mundane. The beginning area in Tahiti feels more like Leisure Suit Larry than anything else (“talk girl”, “buy drink”, “dance”, and so forth), and makes you do other exciting things like calling for a dinghy service and flashing your ID card at everyone you meet. It’s full of stupid little hiccups typical of early Sierra games. After your one night stand you’re supposed to find her lost earring, which is – no kidding – a glimmering pixel. If you don’t do this, you don’t find the microfilm required for later. When you give your ID card to one of the guards, he’ll initially give you back the wrong one, so if you don’t check it, per the procedures outlined in the manual, you’ll again get screwed a few hours later. And when your commanders tell you to memorize a specific sequence of numbers, you’d better remember them!

These are all aggravating, but it’s really all of the secondary tasks that drag the entire game down. The submarine simulation segments aren’t really simulations – you don’t actually have to plan much of anything. In other words, it’s certainly no Silent Service. Absolutely none of the control panels are labeled. Instead, you need study the manual – supplied as a physical copy in the game packaging, of course – and carry out all of the orders the captain gives you. If you don’t turn up the throttle fast enough, or don’t turn to the right bearing, or don’t bark the right orders in a short enough time frame, you’ll crash the sub and die. There is never any point where any of this is fun. The orders are the same every time you play too – it would’ve been nice if it were randomized so it would feel less static, although that may have made it too difficult. Properly executing these scenes are hard enough as it is. There are also more arcade-type sequences, like one where you need to dodge a series of icebergs, or move past another friendly submarine. These are both needlessly difficult.

The battle scenes, though, are even worse. The captain gets sick during one of these, requiring that you carry them out without guidance, so there’s actually some semblance to strategy, rather than simply following orders. But there’s still a very specific set of steps you need to take in order to beat them, and it’s up to you to figure them out. The visuals are nothing but two submarines on a small screen with lines to indicate your torpedoes, with the details relayed to you over the intercom. There’s no real action to take other than deciding when to fire your torpedoes or decoys. If your timing is off, you’ll get hit, or miss your attacks, which is just as deadly considering your limited munitions. Most of this is based on luck. You just have to make use of judicious save scumming, and have a lot of patience. Even more hilarious is during the first battle, when your weapons malfunction. As is turns out, you were supposed to tell a tech to repair one of the cylinders beforehand.

But worse still is the one part where you need to play game of Boss Dice with a fellow crewman in order to get a few items – a bottle of alcohol and a magnetic device. Again, it’s dictated mostly by luck – but you’re not even allowed to save and reload multiple times, lest you get accused of cheating. Why won’t your stupid jerk crewmate just give you the magnetic device you need for the end of the game? Doesn’t he know that he’s potentially dooming the whole mission simply because he’s a jackass? It’s not absolutely essential to beat the game in case you can’t win, but those items do make one of the later segments much easier.

Some of the other activities are slightly more interesting. When you must plot a route for your journey, you need to dig out the map, also supplied in the packaging, to look for the noted bodies of water and supply the coordinates into the sub’s navigation computer. But it’s so remarkably exacting that it won’t accept anything less than near precision. Even if you do it well you’ll be told how far off you are from an “optimal course”. If the computer already knows the best route, why do they make you calculate it?

But the most pressing question is, why are you doing any of this? Why are you acting as a pilot? Doesn’t the sub already have one of those? How about plotting courses? People go to school specifically for that. Why do you have to fix the machinery when it breaks? You’re a super spy, not a technician. Apparently everyone on the goddamned submarine is useless except for you. And if you dawdle around the sub for too long, the mission will actually get called off and you’ll lose. Really? If you’re going to go to such absurd lengths to provide such detail, why does such monumentally ridiculous stuff like this even happen?

Of course, nearly all of these tasks require the use of the documentation included with the game. This was not uncommon in Sierra games, and was quite prevalent in Conquests of Camelot, released in the same year, the idea being you would be learning about actual historical events while playing the game. In Codename: ICEMAN, it’s supposed to involve you further, by unfolding maps and drawing lines, and studying judiciously to master the submarine controls perfectly. But with such a huge portion of the game revolving around it – you need to administer CPR to a choking victim precisely as listed, or otherwise you’ll lose for being too “heartless” – it rarely feels like you’re doing much of anything yourself so much as being quizzed about your legitimate ownership.

At least things are slightly redeemed in the final segment, where you don your wetsuit, blow up some oil rigs, find a disguise, execute an ill-conceived plan to masquerade as a group of caterers, and smuggle the ambassador to safety. Like many of these sequences, there’s a very meticulous set of actions which need to be undertaken, under a set time limit. It’s all too easy to screw up, but at least there’s some intensity here, which the entire rest of the game is lacking. And the music, while limited, is actually quite good. Of course, the very final section is a lousy arcade sequence where you need to drive the catering van up a very steep, very windy mountain, but if you’ve managed to suffer this far, you might as well suck it up to finish the damn thing off. (Or, you can skip it thankfully, unlike the rest of the game.)

Conceptually, Codename: ICEMAN was not a bad experiment – to Sierra’s credit, they were trying to combine genres to create a more rounded experience than their usual fare. But in order for that to work, each of the individual segments needs to be, you know, not terrible. Most gamers of the time were not pleased, and as a result, the game bombed, and its planned sequel, tentatively named Codename: PHOENIX, never came to be. Which, judging how this one turned out, was probably for the better.