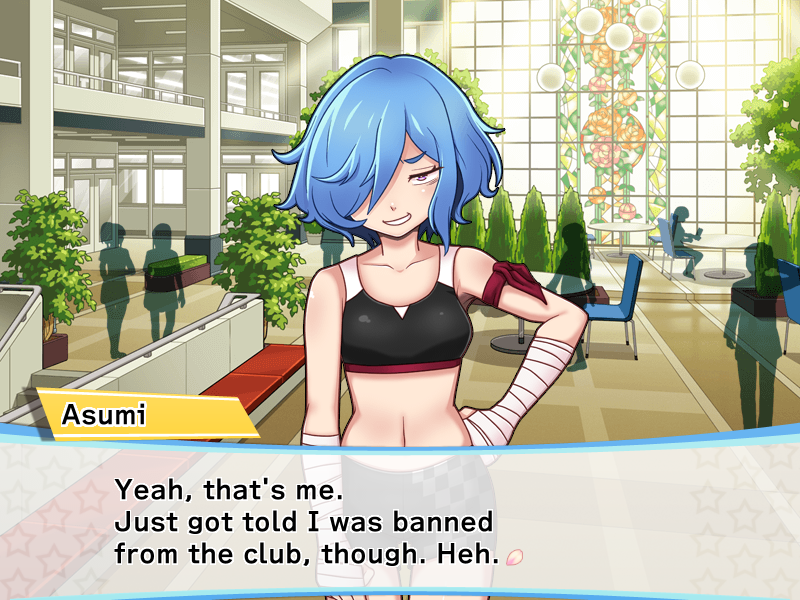 After two successful, down to Earth stories, 733’s next entry in the Cherry Tree series took a MASSIVE swerve into crazy town. As ridiculous as the I! My! Girls! Characters were, Girls’ Fight ups the ante by fourteen, plus a flanderized Haru. Also, instead of a character based story or slice of life about an ambitious girl making new friends and building a club, they decided to make a card battle game where you have to train a team of three wacky anime girls to go beat up other wacky anime girls. I think they looked at the priestess Kusuko (a favorite on the staff) and wondered what it would be like if they designed every single character like that.

The results are magical.

You play as a nameless, faceless new coach tasked by Chitose to train a team to win in the Girls’ Fight tourney taking place at the school, revived after its end three years ago. Once you name yourself and pick some traits to affect training, you can select your girls from a pool of fifteen different girls, each one more nutty than the last. They include… 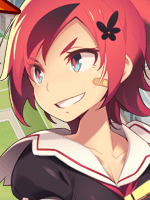 Not-Ryuko from Kill la Kill here is the game’s mascot character. She’s a karate master trying to avenge her dojo, and her fighting style is just as aggressive as her red and black color scheme would imply. She’s nice to birds, though, and overall just an oblivious goof. 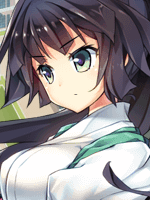 The current successor of Midou school Jujitsu, Kyoko is a more balanced fighter who puts up a cold persona around others, the opposite of the explosive Asuka. She’s the traditional school idol character, smart and beautiful, but also untouchable. 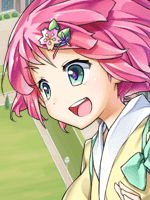 A tomboy who adores Sumo, her small size misinforms her energy and strength. She also wears jumpsuits a lot. Has solid starting endurance. 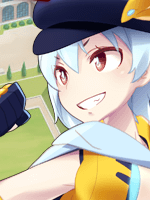 A self-described superhero and cyborg, and an absolute powerhouse with hard hitting special attacks. She also lacks a sense of sarcasm and is easily manipulated. 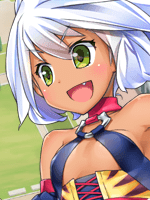 A transfer student from an unspecified jungle in Brazil, Chacha is a catgirl found in the wild that loves going wild and joined a wrestling club just for that very reason. She has a natural talent for grabs and throws. 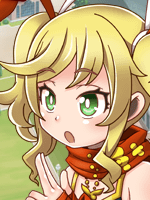 A very lazy ninja who just wants to lay back and have fun, because so much of her life has been devoted to training. She’s difficult to motivate, but has a lot of potential and some tricky ninja arts. She’s also terrified of her sister. 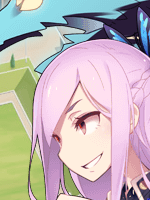 A rich girl from a family of spirit hunters, her powers manifest in the form of the creature behind her. She has incredible offensive abilities, but is it a tad eccentric and doesn’t take positive reinforcement well. 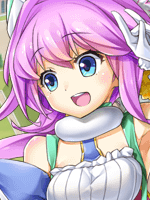 A self-described fantasy princess, magical girl, and idol, plus a big fan of convention cosplaying. Her sweet personality is a ruse that breaks with every cutting insult she mixes in, as she’s trying to be every popular anime girl archetype at the same time. She also has a very strange moveset, matching her strange persona. 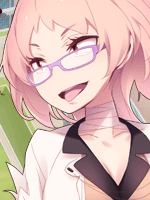 A sadistic mad scientist and possible clinical sociopath that loves to experiment on people, and looks down on most. She mainly fights with buffing potions and such ancient techniques like spanking and stepping on people’s toes. Hey, if it works. 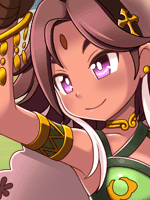 An Indian transfer student who uses Kalaripayattu, a fighting style that involves covering her body in oil to become harder to grab. She’s very well behaved and calming, and the player character can even describe her as a maid if you have the AP. One of the most balanced characters. 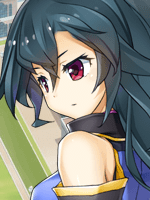 A shy but talented kickboxer who has trouble opening up. She has a great set of moves and a lot of potential, but family issues hold her back a tad. 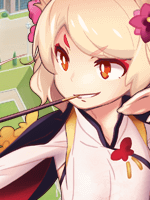 A girl from China with a lot of skill in Kung Fu. She has some trouble expressing herself due to the language barrier, so she’s very matter of fact in her stilted speech, and always straight to the point. 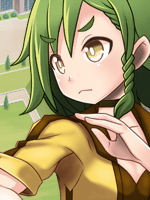 The Bruce Lee stand-in of the game, even using his style of Jeet Kune Do. She’s very upright, which makes her a tough person to hang with for the more eccentric or cruel of the cast. 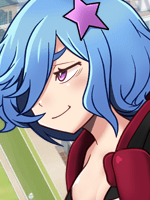 Boxer and street fighter, and also one of the most unruly students in the school. Needless to say, she has an amazing set of punches, but she’s very difficult to deal with, and VERY violent. Her move-set is also based around dirty play and increased damage when in pain. 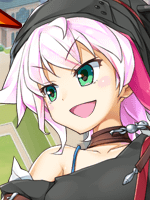 The only previous character returning in any playable form, Haru joins the fight when she hears there’s prize money, which she desperately needs. She uses Taekwondo and has a lot of kicks in her set, though her personality has been simplified to nice, poor, and awkward.

There is a story to the game, but it’s secondary until the final act, which goes absolutely bananas. Kind of hard to believe this series started with the wacky adventures of a would be comedian making a comedy club, and now has supernatural lunacy mixed in. Most of the time, you’ll simply be training for matches, going to places on campus, and talking with your trainees. You can get more topics from visits on campus, and talking with the girls gets them to like you a bit more, improving their progress in training. At the end, the girl you bonded with most will get an extra skit for an epilogue, a nice little touch to give one last laugh before you finish. Talking also reveals new things about the characters, like how Asumi likes working on bikes and Kei’s parents went through a divorce. It’s a nice touch that makes them feel like actual characters and not just one note gags. Though, to do this, you need AP (action points), which are earned after every fight. Do well, and you get more. There are free events from time to time, though, like when you reward a girl when they do well, or when you give them a massage in the right place if they get an injury during training. 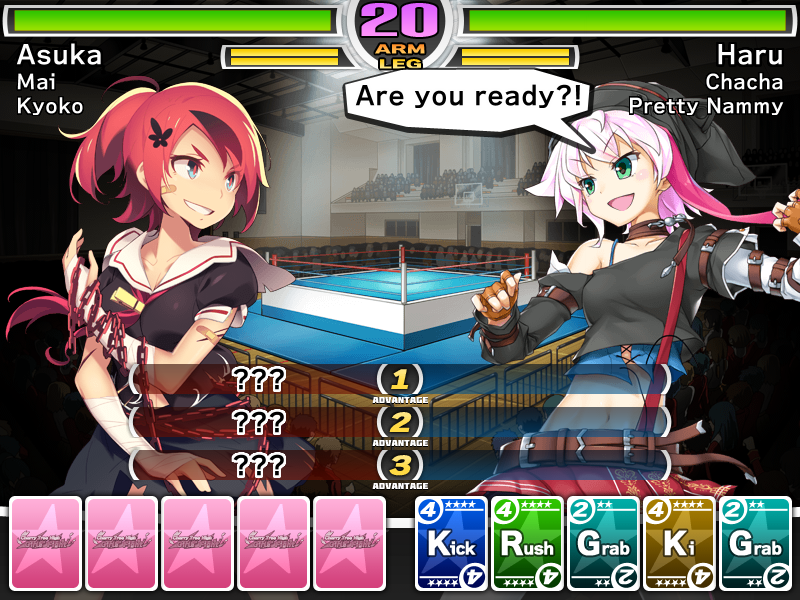 To properly train your girls into one woman armies, you have to plan out a schedule each day to build their stats. Also, you can earn new moves by training over a few days by sacrificing one time slot. It helps to sync the team’s training so they match, though, as this builds team unity, which can lead to increased performance during fights when one of the other girls cheers for their teammate, not to mention greater training bonuses. Of course, specialized training for each girl is necessary, as their movesets tend to work best with certain stats, and most have natural inclinations to certain move types (though this changes by using more moves in combat). You also earn fans overtime, and they’ll cheer for your girls and even grant bonuses like health recovery. Simply do well and earn KOs, a each girl with gather their own base.

Stats include health points, strength (power for punches and kicks), durability (defense and resistance), agility (rush and dodge bonuses), dexterity (for throws and grabs), and ki (for spirit attacks and spells, among other weird stuff). Moves include punches, kicks, rushes, throws, grabs, ki spells, and special moves. By using them, your girl gains an affinity for them, so you can go with their natural preferences, or try and model them into a different style. This can be necessary if your team has too diverse a skill set, and the game offsets this with natural growth and team bonuses in some stats, so you don’t always bottom out in one particular field. Still, specialization is key, as well-rounded fighters will prove to be useless on higher difficulties very quickly. Moves can also have additional effects, like buffs and status aliments, or they can be super dodges or counters for specific move types. Having a diverse pool can be important. 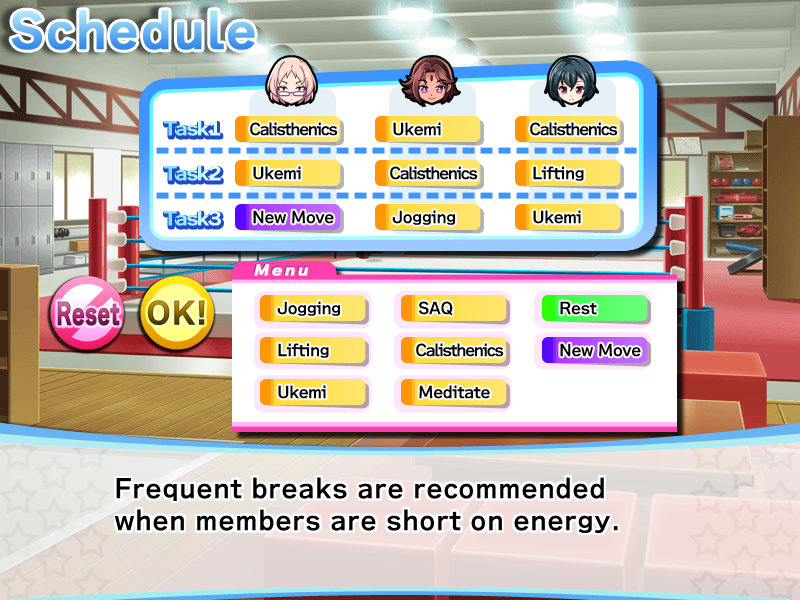 Actual battle is done with cards, as your girls get a total of five every turn in hand. Each card is numbered one through five, with five cards being the most effective, and one being the least. Every card also corresponds to a move type, and selecting said card allows you to pick one attack of that type to use, or a simple block or dodge. Each move also has a number attached, with the higher number attacks harder to pull off, but able to dish out more damage or effect. You select three cards for three different battle phases, and can judge how effective your move may be with the advantage meter that appears under each selected move. You can’t check for your third move, though, so be aware that once you pick card three, you’re locked in. You can, though, check during the first or second picks, then right click to cancel and select something else. From there, the moves all play out, with the most effective move each phase canceling out the other. Repeat until one goes down. Most fights are also limited to twenty turns, so if you want to get the most AP from fights, you need to be able to finish off your opponents. 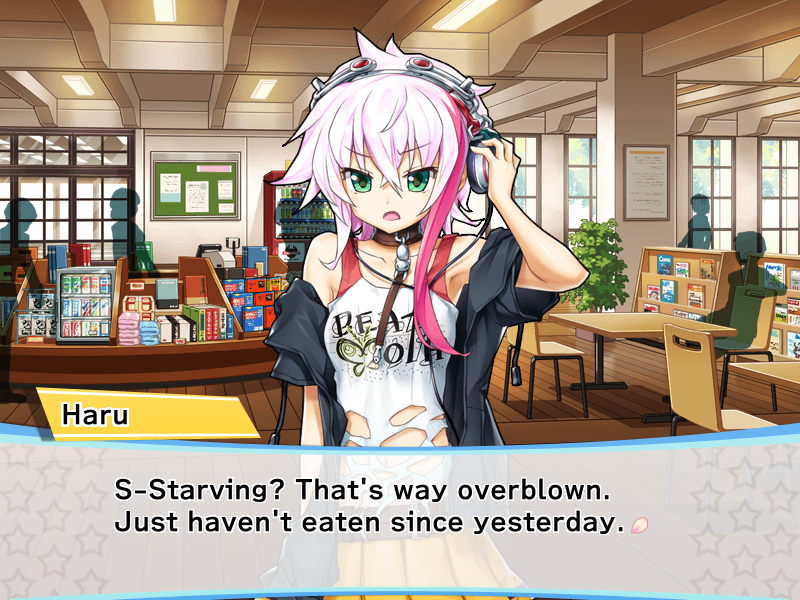 If you do well, you may activate foresight which lets you see one of your opponent’s moves. You can’t figure out exactly what the move is, but it does reveal type and effectiveness, which can turn the tide of a match. You can also change your focus in battle from just damage dealing, like inflicting aliments, self-buffing, or damaging your opponent’s arms and legs to weaken some of their abilities. Once one girl goes down, the next takes her place, so sometimes the best strategy is to set things up for the next girl to get an easy knock out. Of course, getting in a win and gaining fans is also a good idea.

The system does a good job of balancing risk and reward, but you need to balance careful and aggressive play in order to win. The most cautious strategy can’t prepare for every heavy hit, and offensive play can leave you dead quickly. It takes practice, but it’s rewarding to figure out. It’s advised you start on the game’s easy mode, though, so you can get an idea of what the best strategies are. The normal difficulty can be unforgiving. 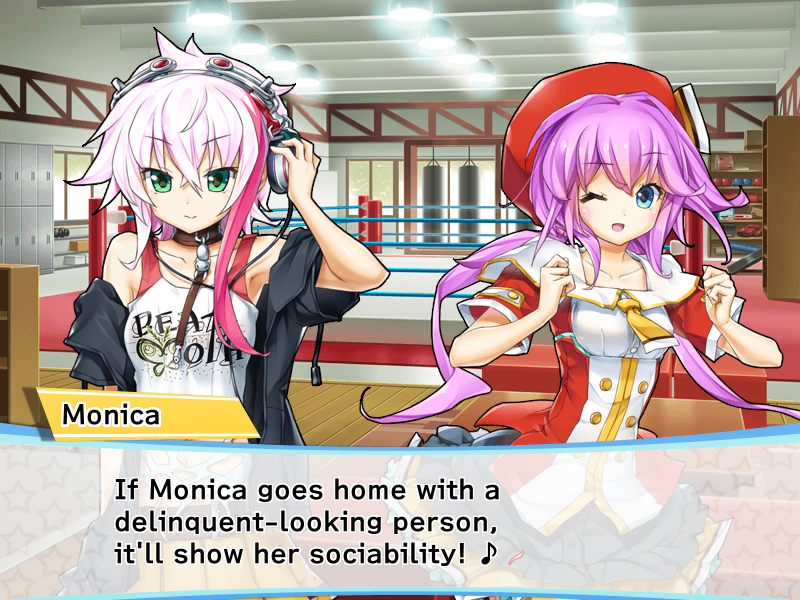 This is definitely an odd installment in the Cherry Tree series, but it may also be one of the best in terms of sheer replay value, and the simplified characters give a lot of laughs. It was arguably an even riskier release than the original game, and it paid off just as much. That said, a lack of narrative is a bit disappointing after the strong stories in the previous titles, and a lack of the original cast feels like a missed opportunity. Still, the new stuff presented works, so there’s not much reason to complain. Constantly poor and hungry Haru is also the funniest the character has ever been. Someone please help her, she hasn’t eaten in days.