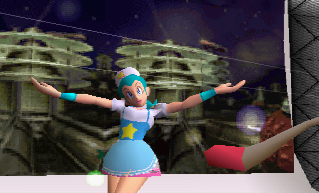 Bust a Groove 2 continues the Bust a Groove series with a number of improvements and new features. Although the basic mechanics of the game are the same as the first game, the most notable changes can be seen in the user interface; it now tells the player which buttons they have inputted during each sequence, as well as telling them when their mashing has caused them to fail the sequence by blacking out the commands. There is also an active score at the bottom for each character, as well as icons indicating the number of Jammers left, and indicators for the new Intensity and Luck systems. Many of Bust a Groove 2‘s changes are aesthetic in nature, but the UI improvements, in particular, make the game much more intuitive to play. 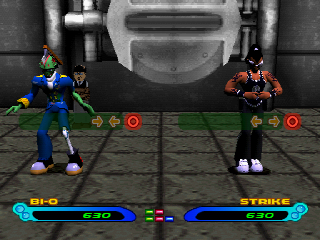 The Intensity and Luck systems provide new dynamics for Bust a Groove veterans. The Intensity system replaces the stacks of potential command chains, instead giving the player different sequence strings depending on their level of Intensity. The player’s current Intensity level is indicated by the color of each player’s score box, going from shades of blue, to green, to red; higher Intensity will result in longer and more complicated command chains, which come with higher point potential. The Luck system is indicated by the stacks of green, red and blue bars at the middle of the bottom of the screen; performing Cool, Chillin’ or Freeze combos of move sequences will add a bar to each stack. If the three stacks are maxed out, the stage will see a visual change, depending on which character added the last block. This will also cause the player in question to earn more points. 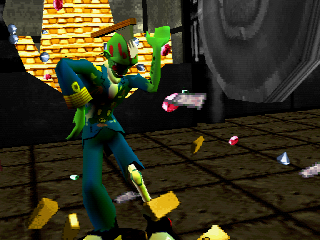 The traditional difficulty settings of Easy, Normal and Hard have been replaced by Easy, Normal and Mix. In Mix mode, face buttons are included with the normal series of directional arrow commands presented to the player. In addition, the trigger buttons may end up being one of the four face buttons, versus just the square or circle button, as in the previous game. The addition of face buttons to the command series provides a much greater challenge than the Easy or Normal difficulties. But, depending on which character the player selects, there may or may not indeed be directional buttons included along with the face buttons in the command series presented. 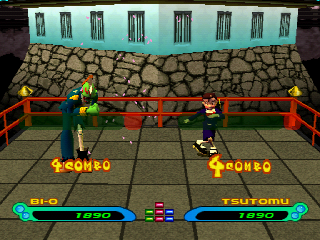 Minor changes to the overall gameplay system include a shift of the Jammer and dodge buttons to the R1 and R2 buttons. Also of note is the addition of Jammer reflecting; a player about to be attacked may press the R1 button to send the opponent’s Jammer back at them, and so on until someone is hit. These mechanical changes make the core gameplay much more competitive and engaging than the first game. 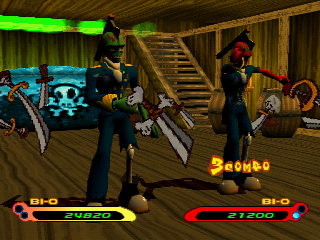 The single-player mode features a new mode of progression, where they travel between nodes on a left-to-right path. Although the stage order up until the last stage is still randomized, by the third stage, if the player attains Fever Time, they will travel along higher rows of nodes. And, depending on which character you play as, as you approach the final stage, you might face off against a secret character, and if the player beats them, the character is unlocked. This helps add some replay value to the single-player mode. 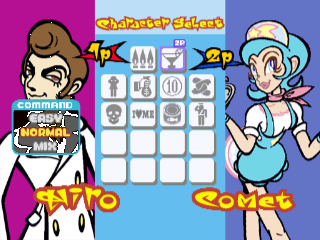 Other changes in the sequel include a roster changeup. While a majority of the characters from the first game return – such as Hiro, whose outfit is mostly the same – several are absent, such as Gas-O and Hamm. New characters include a puppet boy, Tsutomu, Bi-O, a zombie, and Comet, a waitress on roller blades who has the magic power to turn people into food. The new characters are a welcome addition to the overall cast but lack the iconic nature of the original cast. Still, they fit in well with the overall tone of the game. There are also more secret characters to be unlocked, such as a dancing dinosaur; Michael Doi, another disco king; and Hustle Kong, a dancing gorilla. There is also a final unlockable character named Pander, who resembles a man painted to look like a panda, who has his own special hidden stage. Each character also has a special cutscene seen by beating the single-player mode with that character, where they are profiled on a dance-themed television show called Dancing Heroes. It introduces some depth, however necessary, to the overall cast of dancers. 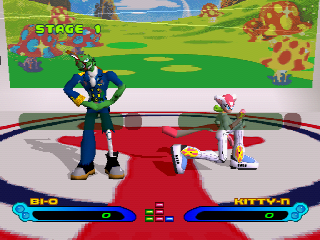 The soundtrack to Bust a Groove 2 was produced by East West Japan, a subsidiary of Warner Music, and the holding company FBIJ. Why Metro decided to go with a record label other than Avex is unknown. There’s a number of tracks that sound like sequels to character songs from the first game, such as another disco track about how great Hiro is, while other returning characters, such as Kitty-N, have tracks in different genres. Hers is changed from a techno dance tune to something that sounds like an opening to a Japanese TV show, befitting of her character’s role as a sentai hero. Of note is the addition of occasional breaks during each song, as opposed to the continual flow of gameplay during each stage of the first game. Some of these breaks come with a change in stage scenery, too. This improves the pacing of each song, even if they are all roughly the same length as the songs in the previous game. As a whole, the soundtrack isn’t really as good as it predecessor, but is solid on its own terms. Highlights include the samba song Gotta Be Happy (Tsutomu’s stage) and the acid-techno track Zombie Hopper (Bi-O’s stage). 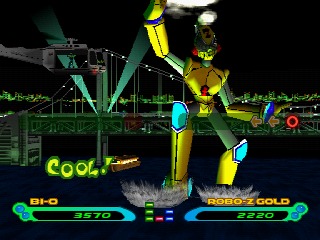 The graphics are much more colorful and animated; the cartoony stage backgrounds are much more active, with more polygonal actors besides the dancers, and change across the course of the song. For example, the dance stage on Tsutomu’s level moves throughout the sky, past skyscrapers and pagodas, as cherry blossoms float through the air. This, along with the flowing river and dark tunnels of Shorty’s stage, represent an evolution in the game’s already impressive visual achievements. The aftermentioned Luck system adds bonus stage effects that shift the camera’s focus from the dancers, really showing off the new stage backdrops. The character models feature more polygons and additional texture details, as well as more effects, such as the trail effect on Kelly’s police baton. The animations are as fluid and funky as ever, and each character has more dance animations overall than the dancers in the previous game. Most of note are the increased number of Fever Time animations, including dual Fever time animations that have a chance of triggering if the two characters’ scores are close enough by the end of a stage. 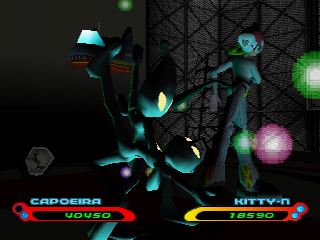 Like its predecessor, the game saw a number of localization changes. Several vocal songs were dubbed into English, such as Comet’s stage theme, Magic Tower, which, oddly enough, was already in English in the Japanese release; the singer still sounds somewhat Japanese, so they might have gotten a more fluent singer; in fact, many of the new English singers do sound like fluent Japanese singers singing in English, which might just be due to East West Japan’s available English singers. The English dubbed songs tend to have unnatural-sounding English lyrics, as they keep mostly the same phonetics as the Japanese versions. Some of the lyrics in Comet’s themes were also slightly altered, as they sounded a little bit too sexual. Graphics-wise, the directional arrow commands are multiple colors outside of the Japanese version. Most notable of the changes were the removal of all of the ending cutscenes from the English version. This is an odd exclusion, as they feature English voice acting, albeit with Japanese subtitles. As several of the cutscenes feature some risque jokes and occasional violent imagery, SCEA might have wanted to be cautious. As with Bust a Groove, the sequel has become somewhat rare, due to no reprints or digital releases. The sequel was also not released in Europe. 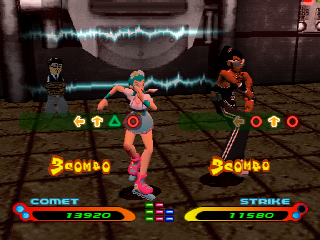 Bust a Groove 2 suffers from several shortcomings. Still present is the mechanic where the camera pivots toward the better dancer, causing the worse dancer to be obscured. The background graphics can be distracting, especially during mid-song stage shifts or if the player maxes out the Luck bars, which causes a flashy animation to occur while gameplay is still going on. The aforementioned song breaks do not always transition smoothly back into gameplay; the command bars might reappear partway through a bar of the song, making the player have to wait for six counts before the usual four-count sequences resume, which could cause confusion. 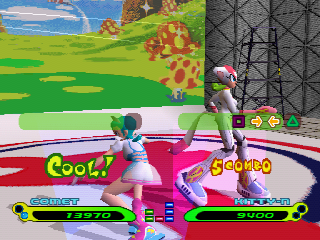 As with the first game, there is an arcade version of Bust a Groove 2, also released by Namco. Information on this version is scarce, but there are a number of interface changes, such as a different character select screen, as well as a rearranged UI during the main gameplay. Otherwise, the physical interface is almost the same as the previous arcade release. Also, all characters seem to be unlocked from the start. 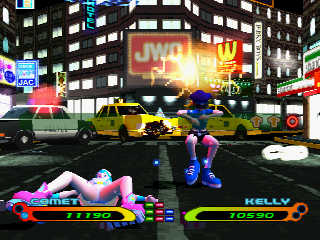 The second Bust a Groove game manages to both iterate upon its predecessor and improves upon it in many ways. The UI improvements, greater variety of dance moves, unlockable characters, and the overall greater polish of the game make it a much fuller package than the first game. The overall experience might not be as groundbreaking as the original, but Bust a Groove 2 still finds a way to create its own style. 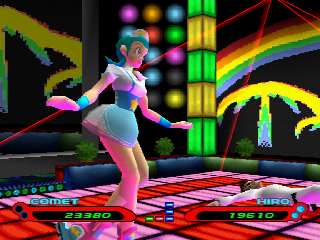 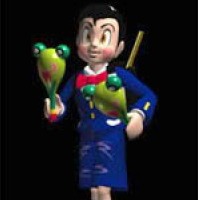 An eleven year old boy who kind of looks like a ventriloquist dummy. 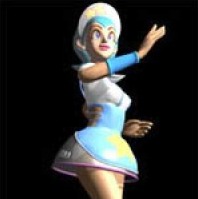 A roller skating waitress at Sushi Planet, which is modeled after those 50s-style drive-in diners. She is actually Frida’s sister. 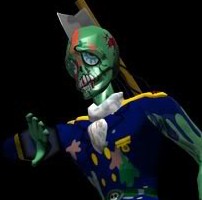 Gas-O’s father, who is, weirdly enough, actually a zombie. Gas-O is actually absent from this game since he was arrested due to assaulting his dad, which explains why he has an axe sticking out of his head. 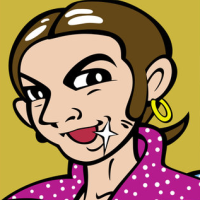 Micheal Doi
A stereotypically homosexual man, who is Kitty-N’s dance instructor and uses her dance routine motions. One of the secret characters. 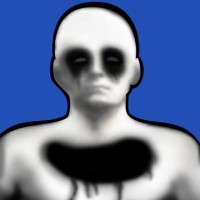 Another one of the secret characters, this creepy dude’s portrait is a digitized photo of a real life man, with black and white make-up to resemble a panda bear. Unsettling. He initially appears as a small panda at the beginning of matches too. 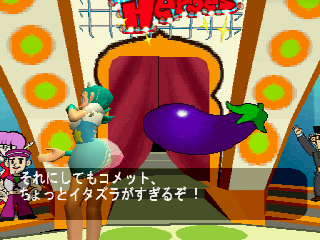 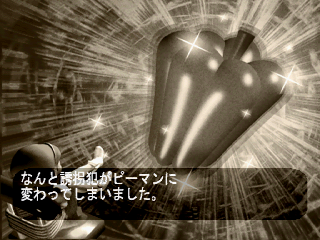 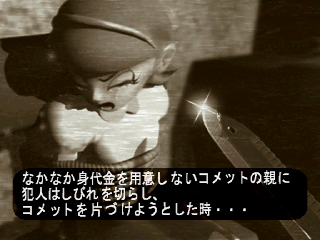