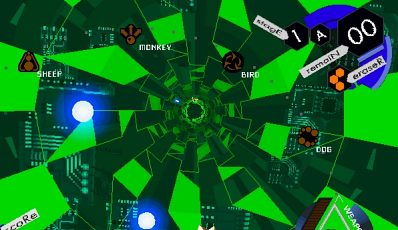 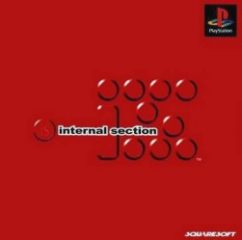 On account of popular game sagas such as Final Fantasy, the Square corporate name and logotype have somehow become the synonymous with grand JRPG games. Some sporadic exceptions, however, distance the company from an absolute devotion to this genre: from the early Rad Racer arcades to PlayStation 2’s very unique Driving Emotion Type S or The Bouncer, the company has also manifested its wish to create or endorse different game experiences in an attempt widen its software library. While it seems clear enough to most that Squaresoft was the top RPG creator during the PlayStation era, only a few realize that they have been responsible for two of the most impressive shooters designed for the system, namely Einhänder and iS – Internal Section. 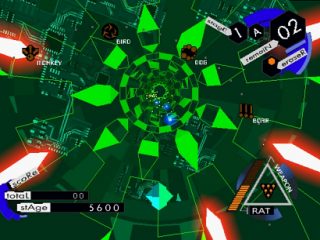 Often described as a twisted fusion between Tempest and S.T.U.N. Runner, this Positron game was released exclusively in Japan in 1999, at a time when the PlayStation games catalogue was already vast and varied. Dynamic and irreverent, Internal Section is essentially a complex “tube shooter”, an unusual angle that can be considered a welcome addition at a time when horizontal and vertical scrolling shooters were predominant. The mere sight of the initial presentation, or the bizarre imagery printed on the bizarre game manual, tells Internal Section apart from a common shooter. Instead of acquiescing to the adolescent anime characters and pseudo-plots, it evokes the same mature, impersonal and hi-tech ambience of the demoscene computer art subculture.

Each of eight levels is divided into four sub stages (A, B, C, D and Boss Fight). When the level guardians are reached, game scheme switches from its tubular form to that of a circular rail drawn around the enemy, where greater shot precision is often required. Internal Section‘s gameplay is utterly unique, allowing the player to instantly choose between twelve different shot types, each of them based on a Chinese zodiac sign: apart from dodging bullets and other obstacles, the key to success lies in the use of the appropriate sign for each situation. Far from a hardcore shooting game experience, Internal Section is all about the experience and aesthetics – rather than superhuman skills – with scattered checkpoints and infinite continues that make it a short, albeit extremely enjoyable video game. 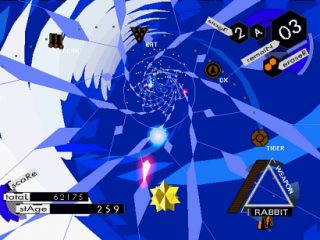 The first impact created by Internal Section originates from the awkward graphic style. Their lack of texture mapping is properly compensated with the addition of smooth and lustrous shading, drawn in vivid colors and wonderful contrasts. Flat polygons pervade the screen as each level displays a predominant color, and each sub-stage exhibits a rich and artful array of pictorial themes. Due to its spartan aesthetics, this uncanny Squaresoft release is bound to be compared with Rez, released by SEGA two years later.

iS also aspires to a perfectly balanced blend of audiovisual and gameplay, including a carefully selected techno music playlist. While not as memorable as the licensed soundtrack from games such as WipeOut, the disk includes 16 original themes that help bring some strong sense of rhythm into the game experience. Similar to Ridge Racer, it also lets the player swap the game disk for an audio CD, essentially giving it a customizable soundtrack. Customizations also include the selection of different ambiences for the levels, a factor that dramatically increases the game’s appeal and replay value. 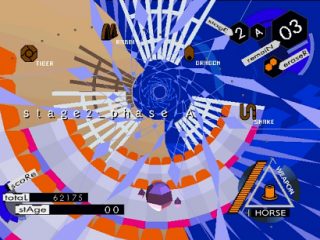 If carefully observed today, in light of modern shoot’em up revivalisms, iS has achieved a certain state of grace, having risen to a level that only a handful of its counterparts were able to attain. Its flat polygon graphics running smoothly on the television screen and its responsive controls prevent the game from looking or feeling obsolete. In fact, everything about iS contemplates innovation, as well as a very strong desire to evade the usual patterns that have long infected this stagnant genre. Its status as a rare and unpublicized title coming from a major company has contributed, undoubtedly, to the consecration of Internal Section as one of the most engaging and sought after titles from the recent past.