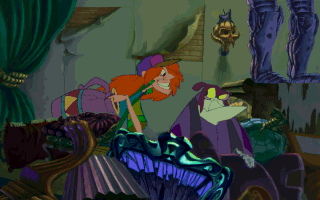 Interactive movies have been around since near the dawn of gaming. Games like Dragon’s Lair and Space Acemixed Don Bluth’s excellent animation skills with simple reaction-based gameplay, and they both ended up being mega-hits. Sure, they might have little to no gameplay aside from hitting buttons at the right time, but they were a cartoon! That you played! With the rise of CD-based consoles, a lot of developers tried to make interactive movie versions of every genre they could, from sports games, to shooters, and even fighting games. It usually didn’t work.

And so ReadySoft, a studio best known for porting Dragon’s Lair and Space Ace to as many computers as possible, decided to bring the genre (as much as this sort of thing can be called a genre, really) back to its roots. They created a game that doesn’t even try to pretend to be another, more playable genre, and instead your only real choices are hitting the right buttons at the right time, hoping you don’t die. Like the Don Bluth games of old, though, there at least is some great animation to make the game slightly worth playing through. Unlike Dragon’s Lair, which had your standard “kill the dragon” fantasy plot, and Space Ace, which was heavily based on pulp sci-fi like Buck Rogers, Brain Dead 13 is basically a more twisted version of Scooby Doo. Scooby Doo, that is, if it were only about Shaggy, and he got murdered every ten seconds or so.

You play as Lance, the most ’90s computer technician to ever exist. Lance is called to the castle of the evil Dr. Nero Neurosis, who has a broken computer preventing him from beginning his plans to rule the world. Shortly after fixing it, and pissing off Dr. Neurosis by referring to him as “average,” Neurosis sends his hook-handed assistant Fritz to kill him. Lance manages to escape Fritz for the time being, but now he’s constantly being chased by Fritz, along with literally everything else in the castle trying to kill him.

The only way to escape from the castle is to find and defeat the castle’s inhabitants, opening the way to the final confrontation with Dr. Neurosis. While leaving through the front door might seem like the obvious solution, Fritz will quickly dissuade that particular notion. The good news is that Lance, despite looking as much of a dork as he does, has a ninja-like agility that you’d never expect from any computer technician. Of course, how well he does depends on how good you are at pressing buttons at certain times, but still.

What makes Brain Dead 13 different from most of the games in its genre is that it actually offers some degree of non-linearity. Dragon’s Lair and Space Ace basically gave you a bunch of sequences that you had to complete in a linear order until you got to the end. In this game, everything’s basically split up into two kinds of scenes: pathway scenes and action scenes, with one kind of scene usually leading to the other. In the pathway scenes, all you have to do is hit the direction you want to move in. You only have about three seconds to decide, though, or else Fritz will catch up to you and murder you. And of course, there are more than a few dead ends designed pretty much just to kill you. The action scenes, on the other hand, are where timing and guesswork come into play. Depending on which way you enter an action scene, you may end up in a different situation, requiring different button presses. For example, entering the castle’s bedroom from the left means you’ll have to hit evil ghosts with a pillow, while entering from the right means you’ll have to avoid getting slashed by the ghost of Jack the Ripper. (Which, for this game, is pretty restrained.) These scenes are where the traditional gameplay of the genre comes in, since you’re expected to hit exactly the right button at exactly the right time, or else you end up dead.

Your overall goal is to find and defeat the bosses of the castle, each of which is holed up in a different part of the castle. Well, the word “boss” might not be the most accurate term in the traditional sense, but since they’re long sequences of scenes where you have to outsmart another character, that’s probably the best way to describe them. The boss scenes tend to be a lot longer than the rest of the action scenes, and although you’ve got checkpoints between each part of the “battle,” they can still take a long while if you don’t have a FAQ at hand, and once you’re in a boss fight, the only way you’re allowed to leave is by finishing it. Some of the bosses actually do have a way to let you escape from them instead of defeating them, but the only way the door to the final area will open is when all of them are completely defeated.

The bosses themselves are pretty interesting, except for a blatant case of reusing footage. You think it’d be difficult to have a palette swap in an interactive movie, but somehow, they found a way. There’s Vivi, a buxom vampire with the personality of a Southern hairdresser. The trick to beating her is finding a way to use her own lethal makeover equipment against her, before she can chop off one of your extremities. There’s also Moose, a sports-obsessed Frankenstein’s monster who’s trying to bash your face in with his rather large bat. The worst of the bosses would probably have to be the blue and orange witches, who chase you around while tossing exploding pumpkins at you. That’d be fine, except that both witches go through exactly the same sequence, only mirrored. Sure, proper animation costs a lot, but did they really have to pad out the game that badly? There’s also a rather large hedge maze where going the wrong way results in instant death, which leads to a fight with a giant fish man statue. Apparently Lance has to fight it to… tear some wires out of its head? Once you manage to finish each boss fight, the elevator leading to the final areas open up, including one final battle with Fritz, who for the entire game has been chasing after you, and more than likely taking your life several dozen times. The ending itself is incredibly short and not much to speak of, although, to be fair, when your entire game is one big cutscene, do you really need an ending movie?

Actually playing the game is an exercise in pure frustration. Standard Dragon’s Lair rules apply. Hit the right button at the right time, you advance. Fail to do so, and you die horribly. The problem is that the game never tells you what you’re supposed to be pushing, and the animation doesn’t always really sync up with the directional inputs. Sometimes the game actually wants you to push another direction than what Lance is doing would have you believe. You do get a small hint with the beeps you hear each time you push a button. A high beep means that you’re doing something right, and a low beep means you’re doing something wrong. You can’t always rely on these beeps, though, because they only let you know if you hit the right button, not if you’re doing it at the right time. Having a guide for this game is very much recommended, unless you actually want to memorize every single move in sequence for hours on end.

Much like Dragon’s Lair, part of the fun is finding all the many, many ways you can off Lance. Most of the deaths in the Bluth games are fairly low-key, since the character was left in a position where they’d probably die, but one couldn’t really tell for sure. Here, Lance can and will die on screen, and horribly so. He can get decapitated, have his skin torn off, have his soul sucked out, get eaten, get wedgied so hard he’s pulled apart, and probably the highlight of all the deaths, having his head shoved into a blender before its contents are drunken down by Fritz. And there are several dozen others. Sure, it’s more slapstick than anything else, since there’s no actual blood shown, but it’s still a little shocking, especially going by how goofy the rest of the game looks. The good news is that you have unlimited lives, which is a good thing, because without them probably no one would ever finish the game. Every time you die, you get a small scene where Lance returns from the dead, which changes depending on which area of the castle you’re in.

For a game made by people who more than likely didn’t have much experience making original animated movies, Brain Dead 13 looks pretty good. While the animation isn’t quite as good as Don Bluth’s stuff, it still has that sort of similar style to it. The game has a pretty good soundtrack, with each area having its own theme. The highlight would probably be the hedge maze, which somehow mixes a ukulele and an electric guitars and still manages to sound good. The voice acting was provided by the development staff, and yet it somehow still sounds pretty good. The writing’s not particularly spectacular, of course, but every character has more or less the same voice you’d expect to hear from them.

Brain Dead 13 got ported to pretty much every system that could conceivably handle FMV on its release, up to and including the infamous Jaguar CD. There are not many changes for each version besides video quality, though. Some of the versions were also published in Japan, but there’s no difference in these besides all the lines being dubbed in Japanese.

So, what would you miss by just looking up a playthrough for Brain Dead 13 on YouTube? Not much. Once you get past the nice animation, it’s still an exercise in memorization and frustration trying to figure out what to do. It almost makes you wish that the creators rather put their effort into making a full length movie with their animation talent. On the other hand, you’d miss out on all the constant deaths of the main character that way, and nobody would want that. Overall, if you really liked Dragon’s Lair, you’ll probably want this game, and if not, well… there’s always YouTube.