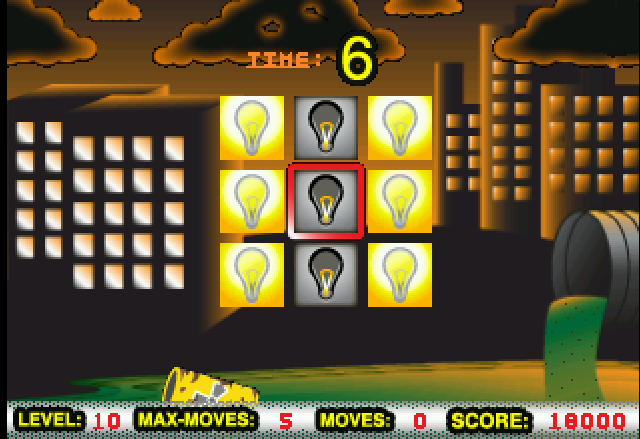 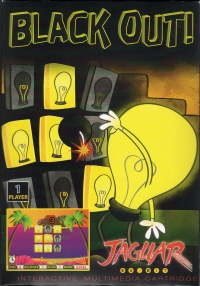 Ever since the Atari Jaguar was declared to be an open platform by Hasbro Interactive in 1999, a slew of homebrew developers threw their hat into the Jaguar homebrew ring with multiple projects. Some continued being devoted to the platform, developing tools to ease aspiring creators interested to work with the system, while others came and went. Among them was Stormworks Interactive, a small Austin team from Texas whose first projects such as Arkanna never came to completion. Despite this, Stormworks Interactive remained committed to the system and eventually managed to release their only completed title to date: Black Out! Though obviously inspired by handheld electronic games like Tiger’s Lights Out and Parker Brothers’ Magic Square, it injects its own style and personality that makes it stand out from other games using the same gameplay style.

In Black Out!, players must turn off all light bulbs presented in a 3×3 grid by performing the lowest amount of moves possible to win the round and proceed to the next round. Each round has a pre-set light bulb pattern and it’s up to you in figuring out the correct pattern to do so before the timer runs out and the game is over, Although there are continues to keep playing, these are also limited depending on the difficulty setting. Said difficulty setting also alters the number of moves players can do during rounds and time limit so, be prepared and get both a notebook and a pencil near you to write down each pattern, as failing to complete a round will send you to the very first round on the current stage. Be warned though, as the game will mock you by attempting to pause it. 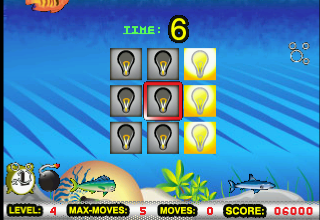 There are four stages in Black Out!, each one hosting ten rounds to complete and each light bulb grid pattern increases in complexity, which they will prove to be headache-inducing if you don’t know the correct pattern to complete the round. Depending on your performance, you win points that are later totaled up at the end of each stage. Strangely enough, completing a round with only two moves does not give you points whatsoever, which makes you wonder if the developers ever thought about giving players capable of completing rounds with two moves a reward or is a glitch in the game that went unseen.

Power-ups are given to you by solving a number of rounds without failing in a row and quickly, which are either a clock that freezes time to give you a brief breathing room to complete a pattern without time being the main issue or a bomb that automatically clears the light bulb pattern by pressing 1 or 3 on the Jaguar’s numeric keypad. Both items will be extremely useful when playing on the highest difficulty level. Finishing the game on the Hard difficulty unlocks an extra stage in the main menu, comprised of light bulb grid patterns previously seen at the main game so if you wrote down each pattern during rounds, they’ll prove to be useful during this extra stage. 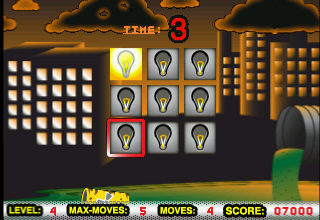 The gameplay works well enough with responsive controls. The visuals are pretty colorful, animated and well drawn for a puzzle homebrew game on the Jaguar, with stages being set on various locations such as an icy mountain that freezes the light bulb grid pattern, which is a nice attention to detail during gameplay, however the main highlight in Black Out! is the soundtrack. Composed by Chris “-cTrix” Mylrae, each track will get you pumped to solve the patterns and is probably one of the best OSTs on the Atari Jaguar, alongside Tempest 2000 and Zero 5. So good is the music that Stormworks Interactive released it as downloadable file online.

However the game is not without issues. Though there are 40 rounds in total to play through (10 more with the extra stage), each round lasts a short time if you know the pattern and more stages would have been welcomed to extend the length. Not allowing to pause the game without being mocked for doing so will prove to be annoying with some players. And besides the extra stage, there’s not a lot of reason to play the Easy and Normal difficulties, as they don’t reward players with anything besides bragging rights though there are cheat codes to unlock other bonuses. 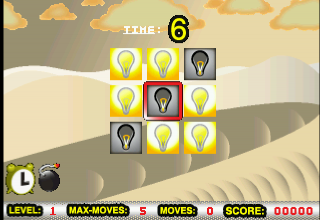 It is hard to recommend Black Out! for any Atari Jaguar fan, since it was a limited release in 2012 (it was launched via cartridge and CD for the Jaguar CD add-on) and it’s very difficult to come by these days without spending a lot of cash. A word of warning for those interested: the initial batch of copies do not work correctly on PAL Jaguar systems.  The developers had plans to release its ROM image for free online but it’s not known if this ultimately occurred. It’s a recommendable title to kill time and one of the better games using the Lights Out/Magic Squares gameplay style but don’t expect anything else from it. After its release, Stormworks Interactive was preparing other titles for the Jaguar like conversion of Heretic and Freedoom, but no major news were shared about these projects afterwards…

Onore no Shinzuru Michi wo Yuke