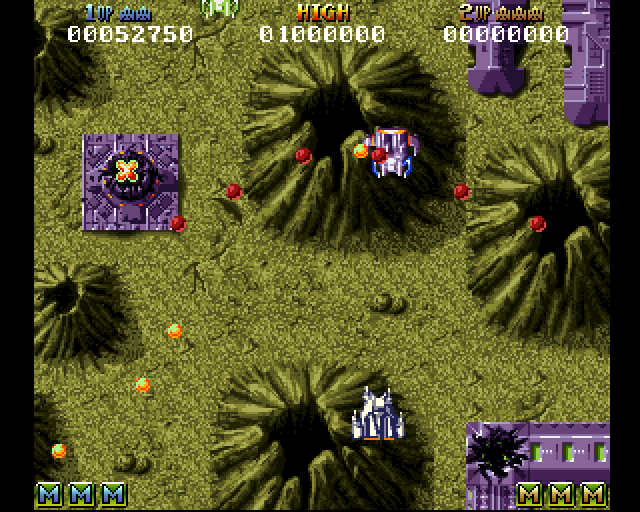 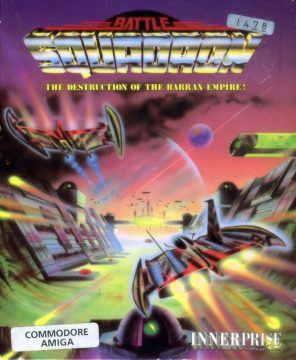 Riding on the success of Hybris, and distancing themselves from a rushed, rather terrible beat-em-up Sword of Sodan released in the meantime, Cope-Com eventually began to work on another vertical scrolling shoot’em-up for the Amiga. In the meantime Xenon 2: Megablast came out, and with its far superior visuals and a catchy theme tune it was shaping up to be the new king of the hill – but then Cope-Com’s Battle Squadron hit the shelves and it was unbelievable how much progress could be made within just eight months.

Battle Squadron: The Destruction of the Barrax Empire!, as its full, rarely used title goes, is a sequel to Hybris only in a loose, spiritual sense. It retains few of the previous game’s mechanics, for example the smartbomb and its method of activation, and otherwise it does its own thing, and does it very well. The most notable feature of the game is its structure: instead of a linear sequence of levels to go through, the game offers a wrapping hub level, the “surface” of the planet Terrainia where the game takes place. From this surface level the player can enter three separate “inner cores”, each with its own unique challenges. Once all the cores are completed, the final boss appears at the hub level, ending the game upon defeat. Beyond that, it’s entirely up to the player how do they want to go about the game, waiting and building up the firepower on the relatively easy hub, or diving in at the first opportunity for greater challenges. 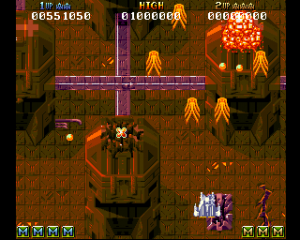 Battle Squadron does away with the interesting but complex expanding wing concept of Hybris, instead offering four different weapons that are upgraded and switched via collectible powerups dropped by an unique enemy. Red weapon is essentially the spread gun from Contra, blue weapon fires forward and backward at the same time, green weapon focuses firepower in a tightly packed salvo, and orange weapon offers a balance between speed, spread, and damage. Every death halves the weapon power – that’s actually a significant handicap in almost every situation, and though the fighter’s renewed supply of smartbombs can often help the player slip by until the next powerup ship, it can still be a bit much – especially since the ship’s huge hitbox makes it really easy to get hit and lose a life once the bullets get really dense. 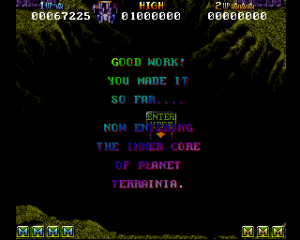 The game’s presentation on the other hand is simply stunning. It’s easily the best looking shoot’em-up on Amiga barring maybe Disposable Hero and Banshee, both released a few years later. The backgrounds are detailed, their palettes chosen well enough, the ships are large and animated with at least a few frames each, and larger explosions and smartbombs make the whole screen shake and flash in satisfying colors. One recurring enemy uses a Predator-esque cloaking system that distorts the background and flickers in an impressive bit of a visual effect. The game’s superior visual fidelity came at a price, though: the art assets alone take up a huge amount of space, a whopping 1500 kilobytes uncompressed in fact, so the developers had to cut corners a bit – the intro and outro sequences were downgraded to just a few grayscale slides (the fully animated version of the intro can be seen in the game’s demo version), and there is only one ingame music track, but at least it’s reasonably long and works well enough as the backdrop to the colorful carnage, much better than the song used in Hybris. 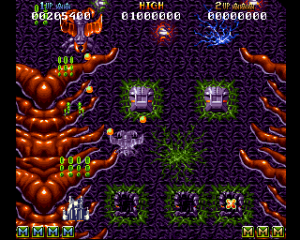 The game suffered somewhat unexpected consequences of being a graphics-heavy Amiga title developed in Europe: there are actually two different versions of the game, the PAL version and the more common NTSC version. PAL is the original game, with the playfield being drawn at full 256 pixels vertical, like in Hybris. When the game was released in the United States however, the resolution had to be cropped to a little over 200 pixels in order to fit in the display space available under the NTSC encoding system. The resulting playfield is effectively around 20% smaller, and that actually makes the game quite a bit more difficult due to limited maneuvering space – plus, the blue weapon really got hit with a nerf stick as a result. 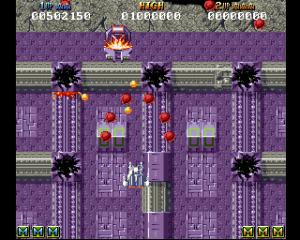 As the player destroys inner cores, the surface gets bleaker

Upon release, Battle Squadron recieved high praise from the press and players alike. Even today it remains a very good game that may be a bit on the tough side, but otherwise hasn’t aged a single bit since 1989, easily being on par with other Amiga classics like SWIV, Disposable Hero, or Banshee. Sadly, it was the last new game ever released by Cope-Com.

After Battle Squadron Cope-Com immediately began work on Battle Squadron 2 / Aviators, a rather weird cross between a shoot’em-up and a beat’em-up, but ultimately never completed it. In the meantime, a 1990 Sega Genesis port of Battle Squadron was released. It’s relatively decent as, far as conversions from the Amiga go. Though the overall visual quality is downgraded, the game has been made a bit faster, more arcade-y, and the level layouts are a bit different. The only really bad thing about this port was the added parallax scrolling overlay used for most of the inner cores that only serves to artificially obfuscate large parts the playfield.

Afterwards, the studio dissolved at some point; since then both developers worked on Hugo the TV Troll series, and the graphician continued to contribute do various video game projects. Sometime around 2010 Cope-Com had been revived, and soon released ports of Battle Squadron (the original Amiga version) to iOS and Android. Finally, in 2015, a Steam version was released by a third party developer, but it was swiftly removed from the store due a licensing dispute that still remains unresolved. Cope-Com also claimed to be working on porting Hybris to modern devices and completing Aviators as a modern game, but so far nothing substantial has been released. 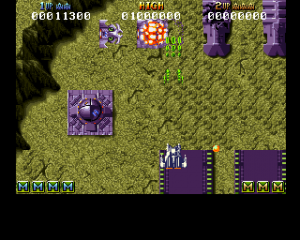 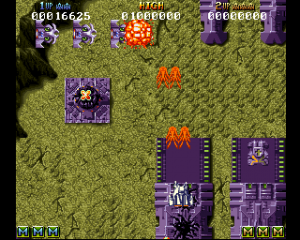 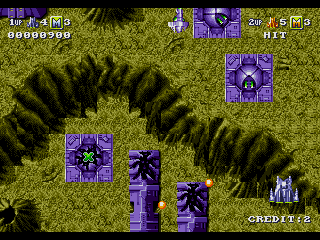 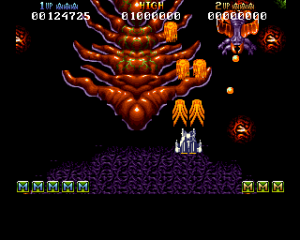 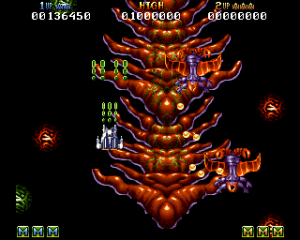 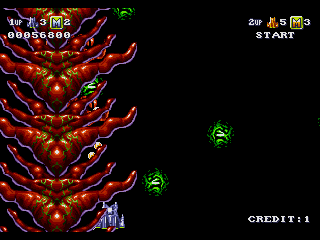