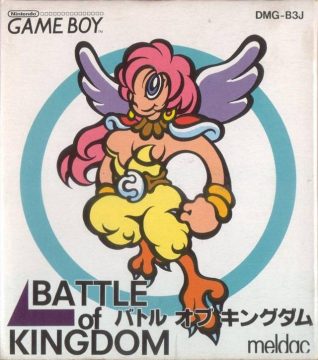 Lenar Corporation’s run in the industry didn’t last beyond the 90s, but that didn’t stop them from putting out all sorts of oddities, from Mercenary Force, a unique spin on the shoot-em-up genre, to Deadly Towers, one of the most notorious and strange games to grace the NES/Famicom. Battle of Kingdom follows in their footsteps as a game that’s both singular in its identity and difficult to recommend. It’s a game that defies obvious genre classification, combining real-time combat with menu-based commands, a cartoonish aesthetic, and a board game-esque structure. A company called Live Planning is also credited on the title screen, though it’s unclear what exactly the extent of their involvement was.

The premise is as basic as defending your kingdom against invaders, but getting anywhere in Battle of Kingdom is far from simple. You’re immediately tasked with spending an allowance of 800 points on a variety of monsters with different HP, attack, and speed stats. The more expensive monsters are naturally more powerful, but each monster also has a unique ability that can be used during combat. Most of these just deal damage, but some of them are more devious, such as the demon’s ability to swap its current HP with the opponent. This is not a balanced game by any means, so the weaker monsters quickly become useless.

The game is divided into six stages made up of a combination of spaces, with each stage culminating in an encounter at the enemy’s castle. Despite its appearance, Battle of Kingdom isn’t a proper board game, since there aren’t other players or dice rolls to factor in, nor are you subject to unpredictable events. You’re required to land on each space, most of which contain battles for you to complete, though there are a handful of spaces that host opportunities to restock on monsters or earn free points.

Combat takes place on an enormous stretch of land and both sides select a monster to summon. The player has five commands that they can select in order to guide their monster, with the two most fundamental commands being movement and attacking. Your other three options all require points to execute: using your monster’s ability costs 30 points, you can heal your monster for 20 points, and you can shove your opponent backwards for 50 points. While attacking, you can also spend 5 points for a jumping attack that moves you forward and 2 points to perform a faster attack. Once a monster is defeated, both sides choose another monster to send out and the process repeats until one team is wiped out.

All of these options create an interesting economy where players need to balance their spending between purchasing new monsters and using the abilities they need to win in combat, but it falls apart for several reasons. The AI doesn’t have to worry about points, so they’ll constantly use jumping attacks, preventing you from fighting back unless you do the same or use abilities. Points are quite limited and monsters die permanently if they’re defeated, so it’s very easy to find yourself in an unwinnable situation, forcing you to use passwords to revert to a previous battle or start the game over. Combat itself is also inconsistent thanks to confusing hit detection – attacks will frequently fail to register and it’s seemingly impossible to tell whose attack will connect first, with the exception of jumping attacks, which usually supersede everything. It’s a shame that the combat makes this game frustrating to play, because with enough tweaks and rebalancing, Battle of Kingdom could have really stood out as something special.

Quest for the Rings, The