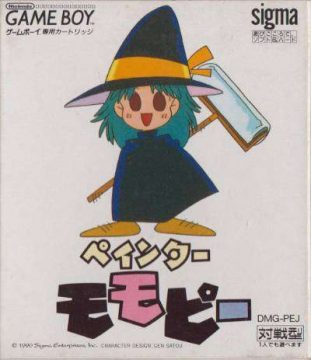 It’s rather unfortunate when a game becomes rather forgotten due to reasons out of its control. In the case of one such game, Painter Momopie, it was because the game was exclusive to Japan, and also perhaps because people dismissed it thinking it’s a simple Pac-Man clone, and also possibly for its cute looks. It really is a shame, because looking past those reasons, it presents such a great concept for a game, with some going as far as to say it’s a hidden gem on the Game Boy.

Developed and published by Sigma Enterprises for the Game Boy in 1990, the plot of Painter Momopie revolves around a witch, Momopie, and her rather laborious chore, with it being that she has to clean every floor of an entire castle using her giant paintbrush. Along the way, she will also come across various enemies, who either want to kill her, impede her cleaning, or both, and it’s up to her to deal with them and clean the castle at the same time.

Like stated previously, on the surface level, this game might appear to some as a Pac-Man/Crush Roller clone, and indeed it does play very similarly to those, but with more open levels. However, it has a trick up its sleeve to help differentiate it from the games previously mentioned. Momopie has various magic spells at her disposal. Ranging from a simple speed-up spell, to one that turns certain enemies into allies, Momopie has many ways to deal with the enemies within the game, and the only thing that limits her is the MP being drained when she uses a spell, so much thought needs to be given on which spells to use, and when to use them. The MP is refreshed after a round, and the MP limit gets raised throughout the game. More spells are also given throughout the game, either after a certain round has been cleared, or by the King giving Momopie a random gift every couple of levels or so.

The graphics, while simplistic, have a lot of charm and cuteness to them. The game does a fine job at giving each character in the game some personality, from Momopie herself, to even a Jason Voorhees-lookalike enemy, all displaying some nice designs, despite the limitations of the Game Boy. The music, composed by Yoshinori Sunahara, supports the graphics just fine, even if it doesn’t have many tracks to choose from, a good example being the track that plays starting on round 8, and certain others after that.

However, the game has some rather annoying issues despite the fairly original gameplay. Momopie has to stand absolutely still in order to use a spell, which can lead to some unnecessary deaths. Speaking of, there are zero save features in the game whatsoever, and there’s five continues total. While it’s somewhat understandable given that the game came out somewhat early into the Game Boy’s life span, and the short length of the game (clocking in at 33 levels), even a password feature would have been appreciated. And for the game being that short, it reuses levels towards the end, and while the difficulty was bumped up in their reappearances, it still feels a little cheap and monotonous.

Despite the flaws it has, it’s totally understandable why some people call Painter Momopie a hidden gem on the Game Boy. Whether one wants to scratch a Pac-Man/Crush Roller itch, wants to dive into more obscure Game Boy games, or wants a relaxing game to get through, this game is definitely worth a look at.