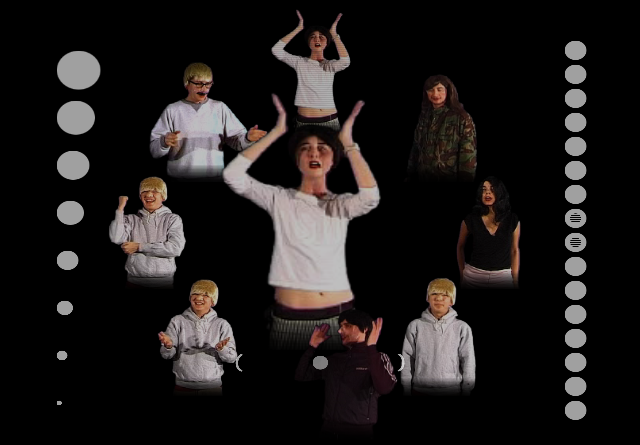 I carried it for more than 20 years.

One day as I walked through the streets a sniper hidden on a roof top shot me. The bullet aimed at my heart passed cleanly through my jacket, piercing my wallet and the handkerchief containing the carefully preserved tear. I died instantly.

A moment. An eternity. A universe formed of the tear and its contact with my blood.

Two strands of DNA from the last time fold inwards together falling through space towards the pavement.

Captured here for the first time for your gaming pleasure. 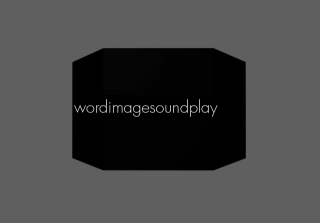 This cryptic bit of text on the back cover is the closest thing to a synopsis you’ll ever find for wordimagesoundplay. Released on the PlayStation 2 in 2004, this obscurity not only remained unpublished outside of Japan but was also distributed in limited quantities – a few thousand – in the only country it was available. Strangely enough, the game was published by Sony Music Entertainment, not Computer Entertainment. This actually makes sense in some way, as wordimagesoundplay isn’t really a game in the traditional sense; it’s more of a multimedia project, similar in approach to productions like Aquanaut’s Holiday or Electroplankton.

While the game is Japan-only, its developer – called tomato – is actually British. It’s not a video game studio; rather, it’s an art collective founded in 1991 that comprises artists, designers, musicians and writers who dabble in different domains of the digital world, either for artistic expression or commercial creation. They have taken part in a lot of exhibitions and have produced a substantial amount of short films. They have also created TV ad for brands such as Chevrolet or Guinness, and even the typefonts used in the Quantum of Solace James Bond film. The collective is also intrinsically connected to a music act – Underworld, a progressive electronics group, which was actually responsible for wordimagesoundplay‘s soundtrack along with the now-defunct downtempo band Johnny Conquest. The members of this group, Karl Hyde and Rick Smith happen to be the founders of tomato. 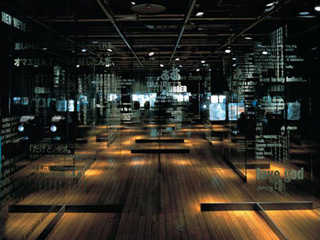 The main menu is pretty straightforward, in regards of both visuals and possibilities. You get to choose between two different modes. The first lets you start a regular game, and the second actually lets the whole thing “play” by itself. The latter is pretty typical of the game’s content, being more of a series of limited-interactivity minigames than anything else. There are four different ones in total.

Let’s start with “miracle & wonders”. You wander around an ethereal and immaculate white empty space steeped in ambient music, with a bunch of floating frames displaying landscapes of some sort. These work as doors to other “zones”, which all are connected through this network. Around these gates, levitating bits of text can be read, and they allow you to understand the story that is “going on” or rather “through which” you’re going. These texts are also read by a female narrator when you get close. The idea is to make the player “explore” a story as if the chapters weren’t in a linear succession. It’s very short, though, so you’ll have everything covered in very little time.

Let’s then pursue with “latlong”. Narration still is the central concept of this one; however, there are now two different narratives, and they aren’t really visually represented apart from the rather abstract black-and-white videos playing in the background. We’re getting closer to what we could call an actual game, though: The two narratives are scrolling, one horizontally and the other vertically, and you can control the scrolling with the joysticks. You may sometimes come across reddish words; it means they’re common to both stories. If you manage to superimpose them, what we could call a “link” is made. The background then suddenly colors itself with warm tones and the trip-hop-like music gets more erratic. If you do it once more, it all goes back to normal. The idea was to make the player match elements of (un)related stories to create some kind of parallel between them. It’s a bit hard to follow both narratives, though that’s probably the point. 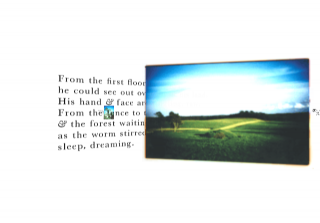 Now, let’s try “phonology”. It’s something else entirely, since it’s not about narration anymore but about audio; music creation, to be precise. You are presented with a whole bunch of “instruments”, which are really just human beings that happen to be digitized sprites of the development team. Each character can make a series of different tunes and noises varying both in length and pitch, and you can freely compose your song while modifying the interface to your liking. The idea as to allow the player to create a composition with the help of often incongruous sounds. It’s also the only session that can be saved to your memory card (and the only one that could require it, anyway).

And, finally, “sleeping eyes”. It’s clearly the strangest of the four, but also the most complete. At first, you are faced with a sliding puzzle; there is nothing to actually solve though, as the game does it for you. What’s of importance to you is what appear in the empty space left after the tiles have moved around. This acts as a teleporter to minimalistic, weird-ass mini-games. You can leave these at any moment, but they also often contain a key element that warps you to the following mini-game without getting back to the main puzzle. Those short gameplay sessions are kind of unusual: The “maze”, for example, in which you assume the role of a horse trapped in a snake-infested labyrinth with no visual representation whatsoever. There’s also “penis”, where you just have to shake a tree trunk for a long time enough. And then there’s “advice horse”, where you don’t even get to play, and just have to listen to a childish horse sculpture tell you tips like “love love but don’t love hate” with a synthetic voice. Yeah. The idea is to make the player experience a whole bunch of unsettling experiences by modifying and letting them guess the way he’s supposed to react to them. 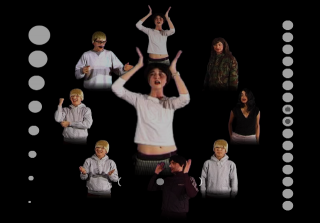 And that’s it, we’ve seen what there was to see in tomato’s wordimagesoundplay. And it’s not very impassionating, to be honest. Let’s have a quick review of its content: “miracle & wonders” is way too poor to be actually enjoyable, “latlong” is interesting but quickly gets repetitive, “phonology” becomes annoying after ten minutes of fooling around, and “sleeping eyes” makes too little sense to really make up for anything. Who knows what the developers of this “game” tried to convey through it, really. It has to be conceded that it does have a bunch of interesting ideas, but that is the very problem. It has ideas, but not much of anything else.

Basically, wordimagesoundplay embodies the issues with conceptual art in the concept of interactive media. “Conceptual art” is a form of artistic expression that doesn’t rely on the actual aesthetic beauty of the end product but rather on the artistic process itself and the meaning it supposedly has; the “concept”. Two typical examples of this trend would be Malevich’s White on White and Kosuth’s One and Three Chairs. Obviously, these works’ point lies not in their appearance but on the idea behind their creation. 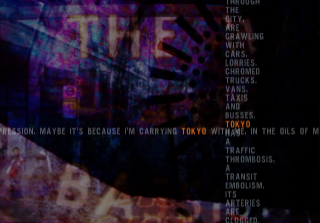 What meaning? Well, we’d like to know. The problem with these decontextualized and isolated “concept” pieces is that they rarely manage to make any real or potential sense, and have very little impact on their public. There’s an “idea”, for sure, but why didn’t they really do anything with it? It could enjoy an actual creative existence by being fleshed out or integrated into a wider system, but conceptual artists generally aren’t interested in that. If you talk to a game designer, however, he’ll probably acknowledge that finding both meaningful and enjoyable concepts that fall into place in a project is among the hardest task he has to carry out, because that’s an essential part of creating a complex interactive work such as a video game. Conceptualization is the art of finding concepts, but conceptual art is the art of finding concepts and doing nothing with them. That’s what happened with wordimagesoundplay – it had a bunch of leads, but never tried to elaborate on the concepts because the designers were content with them as they were. There is a lot of chance, however, that the player won’t feel the same way. 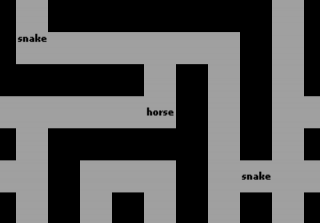 Yume Nikki is a good example of a conceptual game. It’s heavily centered around its concept of simplistic aimless free-roaming, but it doesn’t rely solely on finding the idea and throwing a game based on it. Cluelessly wandering around is enjoyable because of all the work that went in the freaky art direction, and it’s also meaningful because that gameplay makes the player feels lost, alone and isolated. And it ended up with the game becoming an international phenomenon.

wordimagesoundplay, however, doesn’t do any of that. It’s nice-looking but it doesn’t really feature anything aesthetically compelling, and more importantly, its concepts have very little positive impact of the actual experience itself. Yume Nikki‘s clever use of simple gameplay mechanics is why it was a success. wordimagesoundplay‘s unwillingness to propose an actual game rather than just put up concepts for show is why it was a failure. It may entertain you for half an hour, but it will be quickly forgotten afterwards. 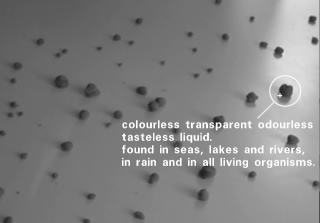