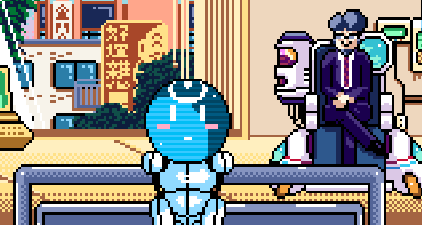 The late 80s and early 90s were a great time for PC gaming. It was back before 3D graphics became a huge craze and the dreaded FMV had yet to take hold of everyone’s imagination, but at a point where everyone was finally learning to master all the primitive computer hardware they had to work with. Japan went wild with this, creating all sorts of strange games on DOS and the machines like it that are just whispers on the wind to the modern player. Where they really showed their stuff was in graphical presentation, showing off detailed landscapes and cinematic scenes with limited movement and color choices, and sometimes no movement at all. It was the right mix of artistic and primitive, unlike the now eye-burning era of early 3D graphics. Metal Gear, Snatcher, Parodius, and a mess of wonderfully put together porn games (Songa’s Viper series is far more prophetic than it should be) all came out of this strange era of mastery of dying tech, creating this simplistic beauty with sprite work no other time in gaming has ever quite matched for me. 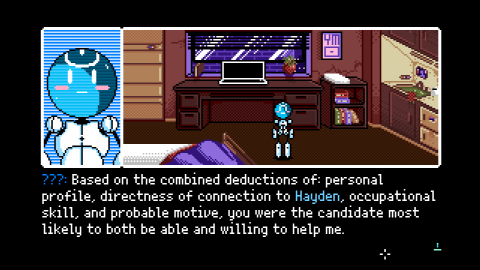 This is because MidBoss’ Read Only Memories is very much a throwback to that era of gaming. Heavily detailed sprite work, the game playing out in a cinematic letterbox with menu on a black background, limited animation, and simple point and click mechanics mechanics built for a mostly static set of images and limited text choices in mind. Surfaces are colored with easily spotted divisions in pixel lines, the colors are the tackiest the 80s can muster and organized in a way that creates an intoxicating atmosphere of urban life, and the utterly ridiculous hair. It even has a shooting mechanic similar to the one found in Snatcher, dividing the screen into nine possible areas of aim. It’s a fantastic style, and it’s great to see it return. With Bubblegum Crisis, quite possibly the most 80s anime ever made, as a named inspiration, all the sheer retro cyberpunk shouldn’t be surprising. But this game is much, much more than just a retro throwback. 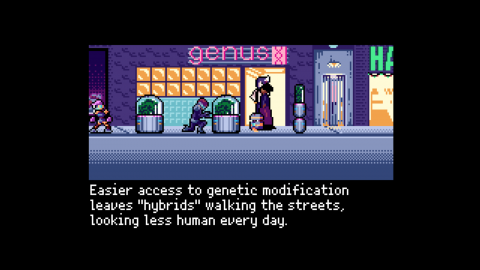 This is Midboss’ first game, but not their first project. Before this, they were the organizers for the first three years of GaymerX, a gaming convention for queer communities. They also made Gaming In Color, a documentary on queer players and members of the industry, calling for greater representation in gaming. Funded through Kickstarter, this is their first go at practicing what they preach, and it’s really great what they’ve done here. One of the major characters is either trans or genderfluid, referred to with non-gendered pronouns. There are multiple gay couples, and your policewoman friend used to date your sister. There’s even a major subplot following people who have become genetic hybrids with some not so subtle commentary on queer politics. But it never tries to rub its sheer gayness in your nose, it just presents these various queer characters living their lives as normal, acting as they all want to and going far beyond the usual queer stereotypes. 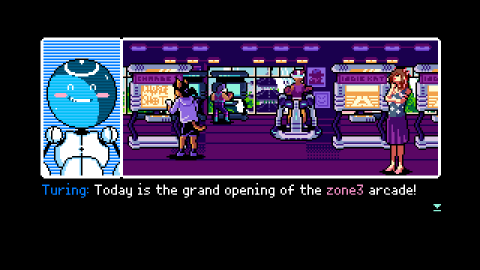 It’s a tough balance. A lot of people make the mistake of making representation something that needs to be celebrated in the work itself, that it needs to be pointed out so everyone knows what a good job the creators did. But it never happens here. MidBoss is too classy and too smart for that. All you really need to do is have it there and make it feel natural with the story you’ve made. The best example of this is whenever pronouns come up as a topic. Turing asks you which pronoun set you’d like to be referred to as, with gendered sets and a non-gendered set, and a scientist later comments on Turing’s own lack of a chosen pronoun or gender, simply because the little guy never really thought about it. The first example is basically choosing your gender, but it’s more clever because it doesn’t specify your sex. You just chose who others refer to you, gender doesn’t define the character you play out. The second example is just a nice little moment that addresses the cultural nature of gender, while also informing us a bit more to Turing’s character and his obsession with hard knowledge over anything about how he sees himself beyond schematics. It’s a moment that says a lot with just a little dialog, creating a rich moment of character development and thematic depth. 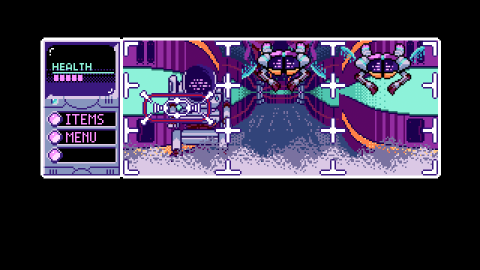 Of course, having a diverse cast doesn’t mean much if the game isn’t good. Thankfully, Read Only Memories is pretty fantastic, and it may be one of the better written games out there. Its plot starts out as many a cyberpunk adventure do. You’re a down on their luck journalist that finds a weird little robot in your house one day. It calls itself Turing, and it’s the world’s first self-aware artificial intelligence. Also, he’s here to ask for your help in finding his kidnapped creator, an old friend of yours. Typical cyberpunk things then follow – stuff like hacking, people with mohawks threatening you, mysterious deaths possibly caused by technology turning on humanity. That sort of thing. The plot checks off a lot of familiar tropes, but the final chapter pulls a neat little trick and twists the expected direction a bit, resulting in a surprising and a tad horrifying game of cat and mouse, and ending with a tense word puzzle that creates suffocating tension and mood from just the fantastic writing and movement of the text itself. The dialog needs to be applauded here, especially all the little tidbits of trivia thrown out, and all the clever foreshadowing. It creates strong characters and sequences with little need for visual splendor, but tosses it in there anyways to add to it all. 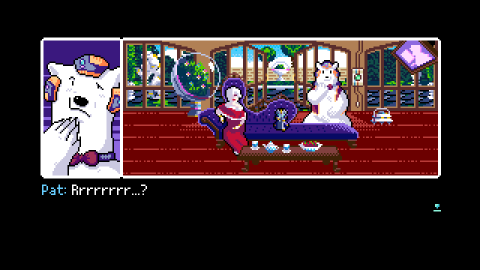 The game is short, at around five hours, but there feels like there’s a lot more there. The world is rich and filled with little details, from simple coffee shop owners with anime obsessions, to polar bears with computer-enhanced intelligence. Everyone is completely different from one another, and there are multiple ways to overcome problems. You can be the nice guy and figure your way around conversations and situations, or you can try taking more direct routes of action, or simply ones that leave a bit more chaos in their wake. Replay is encouraged just to see all the stuff you can change around, and there is a lot that you can do differently. You can interact with anyone and anything by looking at them, touching, talking (even to plants, you weirdo), and using items, and that includes using futuristic headphones to listen to transmissions from most every electronic device. You can even order drinks at the local bar and get an achievement on Steam for drinking the entire menu, which numbers over fifty. There’s just so much other stuff in here that you could lose track of time just exploring everything and probably not get sick of it for hours. 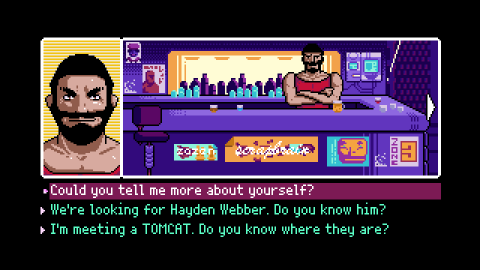 And all this stuff is well used to build the world. Read Only Memories‘ futuristic world has so much history and culture to take in, including horrific war atrocities in North Korea and helping out random street thugs in their holiday rap song (which is required to continue the game). It’s just all so familiar but fantastical, and it makes you want to find out more of, well, everything. The sheer detail even spans to the characters. For example, Turing is a painter and fan of Bob Ross, the famous hacker TOMCAT uses a fake southern accent, the tough as nails Jess works in law when not hanging at a club, and the head of one of the major tech companies of the city spent her entire life correcting all the mistakes her mother made with cyborg technology. All of these details end up being radically important in some way, informing you of important aspects of every character and even other characters at times. The writers got the perfect balance for Turing, giving him child like curiosity, logical computer style thought, and innocent wants and desires. He’s the perfect sidekick, and really, this is his story. You’re just helping to guide him to the right path. 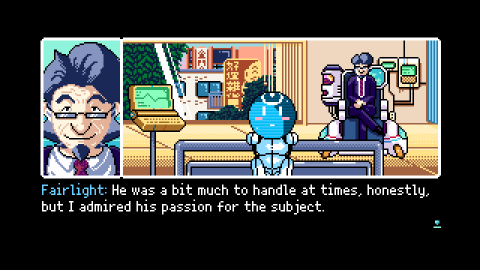 Read Only Memories packs in so much heart and soul in its short runtime, capturing the flavor of its genre, but adding its own richness in the process. It’s beautiful, funny, tragic, tense, and heartwarming, everything a good story needs to be. But the most important element is easily its style. It’s filled with personality and blending just the right mixture of colors and shapes. 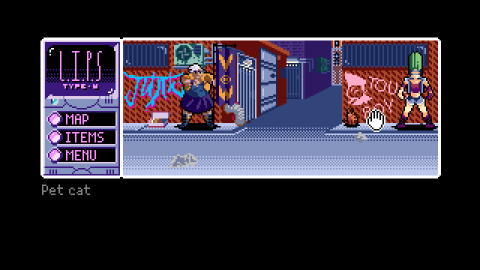 2017 saw a major update for this game, rebranding it as 2064: Read Only Memories, porting it to the PlayStation 4, and making several additions, including a cleaner font, voice acting (most of which is excellent, particularly Turing), an expanded script, new puzzles, new music, new areas, and an added epilogue. All of the added stuff fleshes out what was already a fantastic game world. 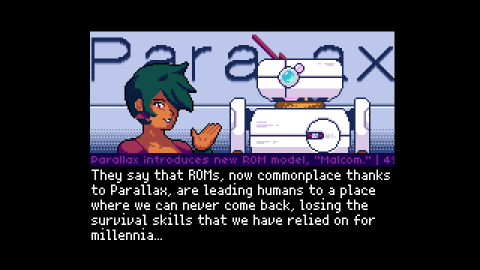