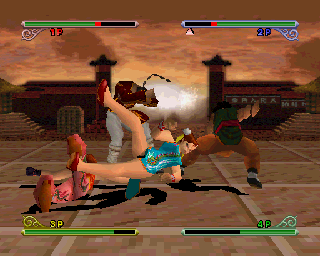 Polygon Magic’s next 3D fighting effort was Shaolin, which is a multiplayer fighting game with a Shaw Brothers-esque kung fu theme. The kung fu -centric approach is interesting in itself, as all the fighting styles in the game are based on specific Chinese martial arts. This is a pleasant change from the generic “just kung fu” style often seen in fighting games, and it gives Lord of Fist a certain veneer of authenticity. 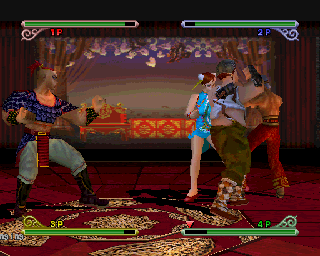 The theme is carried on to the character roster, designed by animator Hirotoshi Sano. Shaolin has a wide selection of Hong Kong actor surrogates, pandas and wooden training dummies. Unfortunately, none of the characters really have distinct personalities, so they’re basically blank slates for the fighting style of your choice. As far as gameplay is concerned, there are only six unique movesets in the entire game.

In reality, Shaolin kung fu is an umbrella term for various Chinese martial arts that may or may not have any connection to the Shaolin monastery. The game’s interpretation of it is probably the most balanced style in the game, with a decent variety of moves and a focus on far-reaching kicks.

Renowned as Bruce Lee’s martial arts system. In the game, Jeet Kune Do is the fastest style with the smallest damage output. Naturally, the one inch punch and Lee’s other signature moves make an appearance.

While it’s commonly thought of as low intensity exercise for old people, tai chi is an actual fighting style. The game’s version combines slow and powerful strikes with devious counters.

This is the style that Akira from the Virtua Fighter series uses. In Shaolin, it focuses on devastatingly powerful attacks that are hampered by their short range.

Hung Gar is the martial art practiced by Wong Fei Hung, Chinese folk hero and popular movie protagonist. It’s the only style in the game with multiple stances – tiger, crane, leopard, snake and dragon. As a result, Hung Gar is the most complex style with the largest variety of moves.

The style popularized by Jackie Chan’s Drunken Master movies, commonly seen in other fighting games as well. Drunken Boxing relies on unpredictable movements to intimidate the opponent and catch them off guard. 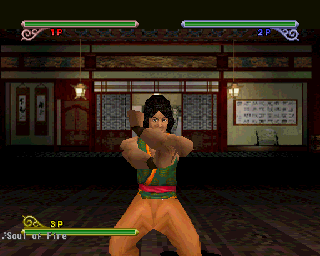 Shaolin‘s most impressive feature is the multitap support, which allows up to eight players to brawl simultaneously. Unfortunately, it doesn’t work that well. The game controls like a standard one-on-one 3D fighter, sidesteps and all, only with constant lock-on to a single opponent. There’s only one button for switching targets, so taking on multiple combatants or even positioning yourself can be unnecessarily difficult. The eight player versus mode is almost chaotically unplayable and defaults the player models into differently colored training dummies, but it’s good for a laugh.

Multitap support aside, the gameplay doesn’t really differ from the established norm. It’s got the standard assortment of juggles and counters, but it isn’t particularly deep or original. Shaolin feels almost deliberately simplified to accommodate the multiplayer combat.

The camera generally does a decent job of keeping up with the action, but occasionally works itself into awkward and confusing angles. Pulling off specific moves at these times is unlikely, especially since the directional inputs are strictly dependent on the way your character is facing relative to the camera – e.g. pressing up+kick when facing right leads to the same attack as down+kick when facing left. No other fighting game does this, and the world is probably better off for it.

The game’s main story mode is very ambitious – a lengthy RPG-style adventure, akin to the ones in Ehrgeiz or the Tobal series. There are separate storylines for each of the six fighting styles, ranging from avenging the death of your parents to wooing the prettiest girl in China. You begin the story as a little boy or girl and eventually grow to adulthood. Also, your play style affects the way your character grows up – eating a lot will cause your boy hero to eventually develop a bona fide Sammo Hung physique, complete with jiggle physics in the belly area. In theory, it sounds great. 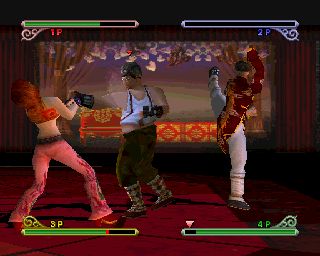 Unfortunately, actually playing the RPG mode is tedious at best. The camera angle is awkward, the controls are tank-like, and a lot of it involves cluelessly seeking out the exact NPC that will arbitrarily progress the story. There’s a lot of grinding, as opponents in new areas often have a significant statistical advantage over you. Although new moves can be learned as the story progresses, your character starts with a ridiculously limited moveset (such as being unable to use throws). In practice, you’ll often end up pummeling your opponent with the one combo you can do until you learn something better.

In addition to the story mode, the game has a run-of-the-mill versus mode with both team and free-for-all matches for 2, 4 or 8 players. Playthroughs of the story mode will net you new character models, but as noted before, the effect is only cosmetic.

Presentation-wise, the game is decent. The character models look smoother than in Polygon Magic’s previous titles, with some nice cloth animation for the era. While the frame rate can get a bit low during larger scuffles, it nevertheless runs at a steady and playable pace. If anything, it’s a technically proficient engine that doesn’t really get its chance to shine due to middle-of-the-road visual design. The music is mostly in a traditional Chinese style with breakbeats layered on top – very late ’90s, but not exactly mind-blowing.

Mostly, Shaolin is just disappointing. It’s got great ideas, but both the fighting and RPG modes end up feeling like afterthoughts to each other. It’s definitely original, but in the end it stands out more as an oddity than a forgotten gem.

Shaolin was originally released in Japan as Lord of Fist, with the THQ-published European version renamed as Shaolin. Plans were made to publish the game in the US, but for one reason or another this never happened. Coincidentally, Kurtis Fujita was once again involved, this time as a martial arts consultant. Apparently, THQ was also involved in the game’s production.

I was fortunate enough to work under Michael Haller at THQ who was aware of my experience in the Martial Art of Kung fu. He chose to have me serve as the Martial Arts Consultant on the Shaolin game. This entailed me looking over the dialogue, artwork, and motion capture animation of the game. This eventually led me to Polygon Magic’s studio in Tokyo where I met with the team there for a week long consultation phase.

The European and Japanese versions are nearly identical – most of the Japanese version’s menus are even in English. The most notable difference is the versus mode character Xu Bing’s appearance, which was changed completely for the European version. The Japanese version wears a skintight leather outfit, so it’s possible that it was just considered too risque for the game’s 11+ ELSPA rating. 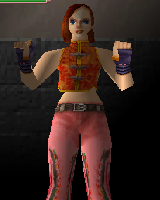 Polygon Magic’s final PlayStation fighting game was the absurdly named Slap Happy Rhythm Busters, which has already been covered on the site. Strangely enough, the Vs. characters Mia, Oleg, and Ramos were resurrected for it. Fujita, who also worked on the game’s comic book style loading screens, provides background information once again:

Slap Happy Rhythm Busters was actually a pseudo-sequel to Vs. On this occasion Kentaro Miyazaki provided and revamped the designs, adding his own unique flair and character to the project. While Vs. was the inspiration for this game, the U.S. sales of Vs. were not high and thus it was not named as a direct sequel to the original project.

Since then, Polygon Magic’s only new fighting games have been a couple of licensed titles based on the anime series Bleach. While their contributions to the genre may not be part of its essential history, they are nevertheless interesting artifacts from its time in the limelight.

Finally, a tremendous expression of gratitude for Kurtis Fujita, who provided invaluable insights that transformed parts of this article from empty speculation to actual information.