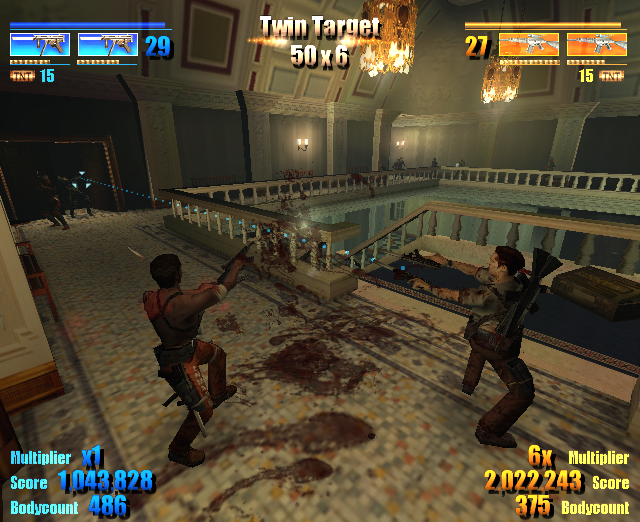 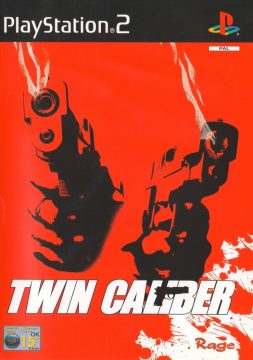 Starting in the 1950s, movies began presenting expert gunfighters as being able to wielding not one, but two guns at the same time. Taking a cue from movies, video games have attempted to give players the opportunity to duel wield guns, either by making both weapons aim at the same target or by making both weapons auto aim at separate targets with no input from the player. Twin Caliber refuses to conform to either of these mechanics, and instead present its own unique take on the concept. 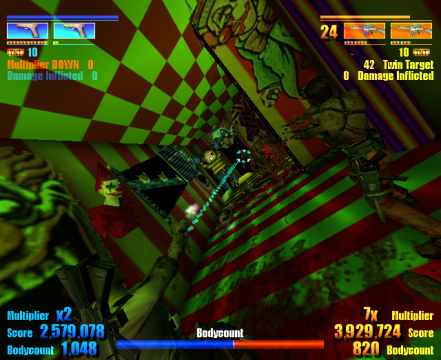 In short, Twin Caliber is a 26 level, two player co-op, arcade-style rail shooter, combined with the cinematic presentation of a movie, that tells the tale of what happens when a sheriff and felon team up to stop a zombie apocalypse. At first glance Twin Caliber looks like a mash up between Dynamite Deka and House of the Dead, but in fact it plays like neither. 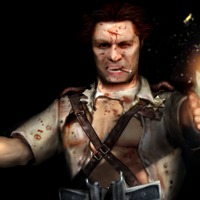 What is a sheriff to do when his town is overrun by zombies and cultists, his fellow lawmen are dead, and he finds himself trapped in the local prison? Release the the death row inmate and promote him to a full member of the sheriff’s posse, of course. Fortman is the older more experienced and more even keeled of the two. 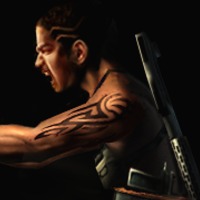 What is a death row inmate to do when society gives him a second chance at life? Grab the opportunity with both hands and never look back of course. As the second half of the game痴 buddy cop duo, Valdez is the opposite of Fortman: brash and young. Despite this he plays the same as Fortman. 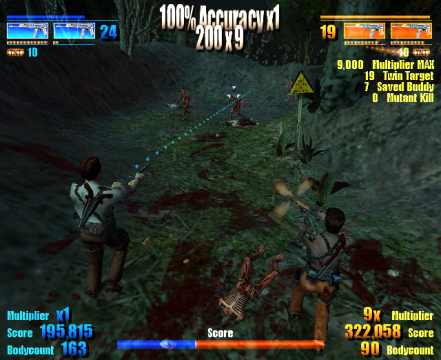 Twin Caliber‘s unique twist is to allow the player to aim and fire two weapons at two separate targets at the same time. Each analog stick on the PlayStation 2’s controller controls the aiming of one weapon, which has a full 360 degrees. As the game is presented from a third person camera that changes and shifts as the player progress, dotted lines are drawn at all times to show where each weapon is aiming. The system works remarkably well except for one catch. Humans are not chameleons and therefore have difficulty actually focusing on two things simultaneously. Consistently hitting two targets on opposite parts of the screen is near impossible. Even when two targets are close together hitting them can be difficult. It’s not that the game mechanic is broken, so much that it takes a lot of practice to get used to. For those who find the two guns too unwieldy, the game allows both arms to be tied to the right analogue stick, which solves the problem at the cost of removing what made the game unique in the first place.

As the player progresses, controlled automatically by the game as with all rail shooters, the camera follows them, often changing angles when entering a new room or swinging to the sides as new threats appear. To the game’s credit, the transitions between cameras never feels jarring and does lend the game a nice visual flair. However whenever the camera pans side to side, the players aim moves with the camera, resulting in the player either missing his target or worse shooting his ally. While the friendly fire can be prevented by a visit to the options menu, nothing can solve the player having to adjust his aim. Ammunition is limited but checkpoints which save progress and restock ammo and health are consistently spread through out all levels such that running out of ammunition is never a serious concern. 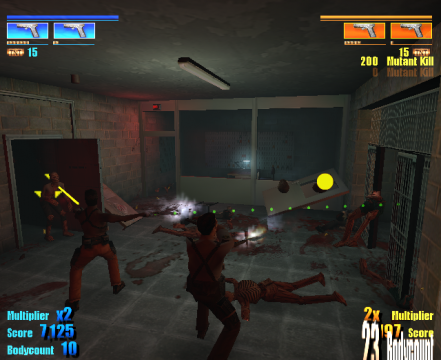 While a friend usually makes most co-op games more enjoyable, should the player not have a friend on hand Twin Caliber provides a skilled and competent AI to accompany the player. In fact, the AI will play better than most people do. Its only fault is that when it comes to some of the boss fights the AI will simply play stupid in order to not reveal to the player the secret to defeating the boss.

Bosses are by far Twin Caliber‘s biggest stumbling point; their difficulty is in no way tied to player progression in the game. To make matters worse, nearly all the bosses require that the player be able to accurately fire both weapons independently, so any players who locked both weapons to the right analog stick will now find themselves trying to master the control scheme at the worse time possible. For example, the game’s second boss, a giant possessed robotic saw machine, is one of the most difficult bosses in the game. Defeating it requires both players to alternate between shooting nine different targets. Six of targets can never be destroyed but must be repeatedly hit in order to expose the three targets that can be destroyed. Other boss fights provide no hints as to how they are to be defeated or worse provide outright misleading information which serves to frustrate the player. The bosses come in stark contrast to the rest of the game, which is an enjoyable and well executed rail shooter that, while difficult, never feels like it’s out to torture the player. 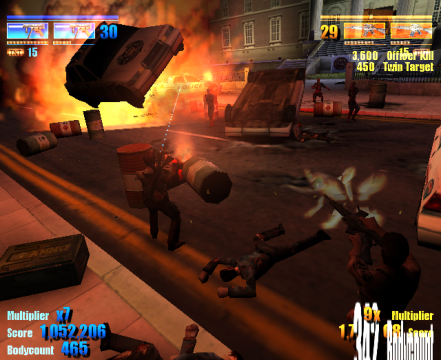 The game’s music is exceptional. The first half of the game is dominated by tracks that serve to build up tension and add to the ambiance of the current location, and while not memorable, are well executed. The second half of the game is primarily scored by British DJ Rob Overseer whose style works to ramp up adrenaline as the player closes in on the source of the zombie apocalypse. The one black mark on the game’s music is a single track that plays during a carnival level. While the song sounds like an authentic tune that might be used in a fun house, the track doesn’t mesh with the rest of the soundtrack and grates on the ears for the short period of time it plays.

Despite being built on the original Unreal engine, Twin Caliber‘s graphics often seem rough and unpolished. While it can be argued this roughness plus the manner in which zombies get blown to pieces, with lots of gibs and blood flying everywhere, lends the game a certain B-movie feel, inconsistencies abound. Several levels have a dark black fog hiding areas from view of the player in a style reminiscent of many early PlayStation 2 games, yet other levels have wide open fields with no fog allowing the player to see off into the distance. Animations range from good (walking and running) to some which are so bad (jumping) as to actually be amusing to watch. These inconsistencies in quality may have more to do with Twin Caliber‘s short year and half development by a core team of only seven developers, then with anything else, but it still leaves the game’s visuals looking worse than they could have been.

With adjustments to its bosses, Twin Caliber would present a much more consistent demand on the player’s skill and be less frustrating to players. As it stands, players will have to replay the first two levels of the game until their skill level is such they can make it past the second boss. Still, for those who enjoy rail shooters that Twin Caliber is a hidden delight in an overlooked genre. 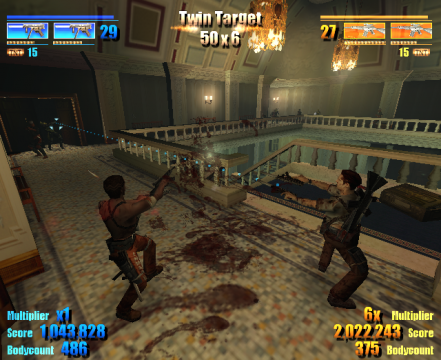 As Twin Caliber stands, though it was panned by the UK gaming press for its faults, and with the subsequent bankruptcy of the Rage Software, Twin Caliber would never see a release other than its initial PlayStation 2 PAL region release. With Rage Software gone, the core members of its Warrington branch formed Juice Games in 2003 and reoccupied the same office space they had previously worked in as Rage Software. After being purchased by THQ, Juice games became THQ Digital Studios UK before being closed for good in 2011. Due to its limited release and the fact the PAL release only supports 50Hz, those wishing to play Twin Caliber outside Europe will have to either acquire a PAL PlayStation 2, modify a NTSC PlayStation 2, or play it on an emulator.

Links:
Interview with Steve Hunt Lead Developer of Twin Caliber in which talks about how he became a game developer
Personal Site of Rob Overseer