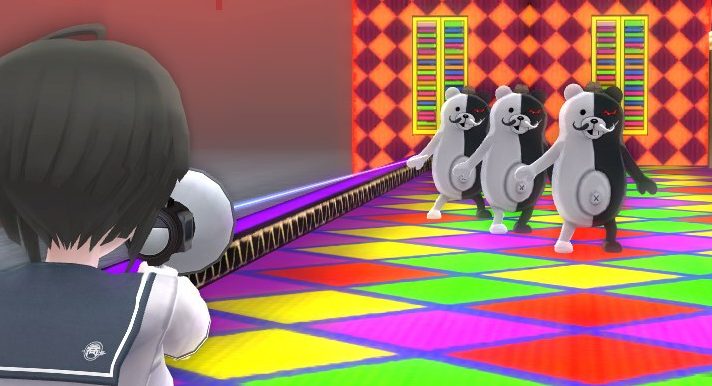 In the first case of the first Danganronpa, Monokuma threatened to hunt down the relatives and loved ones of all of his captives and do terrible things to them, as motivation to get them to start killing each other. For Makoto Naegi, those people were his sister and his parents. This particular thread was left unresolved, but it’s used as the premise for Ultra Despair Girls: Danganronpa Another Episode, an action-based spinoff, which is an interquel that takes place between the first and second games. The title is a reference to the game series Zettai Zetsumei Toshi, known as Disaster Report and Raw Danger outside of Japan. It was initially released for the Vita, then ported to Windows and PlayStation 4. 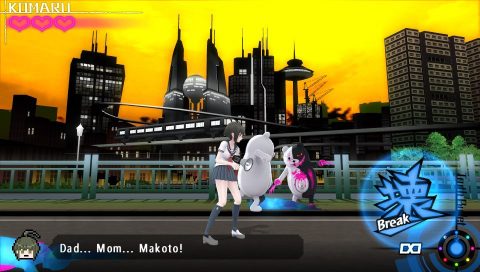 First off, it should be noted that the very premise Ultra Despair Girls spoils one of the major plot twists of the original Danganronpa. It also spoils the surviving characters, since one of them is, obviously, playable. Playing the first game is essential to getting the most out of this story. Playing the second isn’t mandatory, though a few things are references and are potentially spoilers if you know what you’re looking for.

The game stars Komaru Naegi, sister of Makoto, who has been locked in an apartment without any outside contact for more than a year. She’s rescued by Byakuya Togami, only to escape and find that the area, Towa City, has been overrun by vicious Monokumas. During her imprisonment, the kids of the city revolted against the adults, donning Monokuma helmets, and began killing them, creating a “paradise” where kids would no longer suffer under the tyranny of adults. 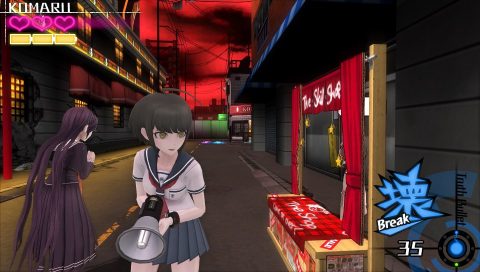 Komaru is joined by Toko Fukawa, one of the few survivors from the first game. The camera is positioned behind Komaru, so it feels sort of like Resident Evil 4 and other similar action games. Komaru wields a “hacking gun”, which looks like a megaphone. This gun shoots “word” bullets, which can be used to destroy the Monokuma robots, amongst other effects. As you progress through the game, you find different types of bullets with various uses. Some of them are just different types of weapons, like “Throwback”, which has a wide range and can be used on enemies with shields, or “Burn”, which has rapid fire. Others have different effects, like “Dance”, which will cause a Monokuma to boogie down and distract other enemies, or “Link”, which lets you temporarily take over an enemy. You can also earn Monocoins, which are used to purchase adjectives that can modify the word bullets with different effects, among other power-ups.

Throughout the game there are puzzle rooms, which are introduced via an overhead camera displayed by a “Monokuman” arcade game. The goal in these rooms is to use certain specific bullet types to kill all of the Monokumas in a room at once, without getting spotted. These are clever, at least in concept, though few of them are truly challenging. It ultimately doesn’t matter because you don’t really need to “beat” any of them in the way you’re supposed to – you can run through and just kill everything normally in most cases, though this counts against you in your grading at the end of the mission. 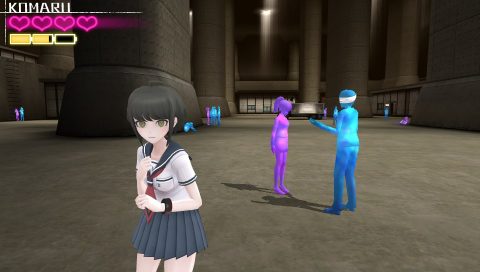 That sort of lackadaisical approach to puzzle solving is reflected in the action sections too. For the most part, Toko just tags along with Komaru, but you can also call upon her “Genocide Jack” personality, where she lets loose using his/her slicing scissors attacks. In this form, Toko is invincible, though you can only use her as long as you have enough energy. (Genocide Jack’s appearance is determined by a stun gun, which Toko uses on herself.) Batteries to replenish this are common though, and she’s so overpowered that it’s often an instant win button, making most encounter trivial. Even the boss battles just revolve around find a weakness, exploiting it, then unleashing Genocide Jack.

One of the major issues of Another Episode is that it’s an action game made for adventure game fans, so it doesn’t seem like it takes the action or puzzle game elements all that seriously. The shooting segments aren’t flat out bad, but they aren’t really all that exciting either. The Monokuma’s weak spot is his red left eye, but it’s too small to consistently hit, especially with the fiddly controls. It’s not unplayable, but it lacks in both the fun and intensity of similar action games. It begs the question, if Spike-Chunsoft wasn’t all that invested in making an action game, why not just make it an adventure game like the other titles? 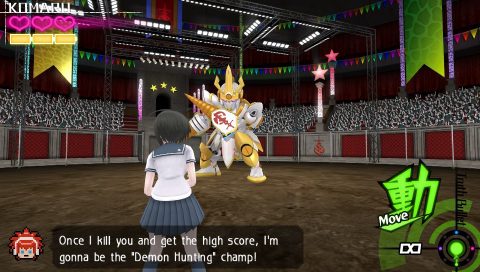 The setting isn’t all that interesting either. In many ways, Towa City is like any other post-apocalyptic scenario, except the killers are kids. It adds an extra bit of freakiness to the story, especially when reading the notes left around, typically of parents being murdered by their offspring. But outside of a few areas that are appropriately surreal, most of the environments are boring. The music, while decent, consists of too many remixes of themes from the previous games. The new main theme is catchy, at least, being the sort of strangely upbeat theme, complete with hip hop-style vocalizations, that’s a hallmark of the series.

The story also lacks a good central villain. Monokuma was always a threatening presence in the main games because he was cracking terrible jokes one second then murdering people the next. Ironically in this game he’s everywhere since almost every enemy is based on him, but none of his personality is. Instead the roles are taken up by five children who call themselves the Warriors of Hope. They function in mostly the same way as Metal Gear Solid bosses – each of them has a gimmick, and each has a backstory involving abuse and torment at the hands of their parents, which explains their hatred for adults. For the most part, however, these aspects are handled clumsily, especially when it comes to dealing with sexual abuse. 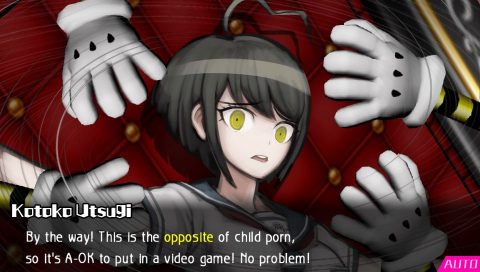 One particular strange section is when Komaru is kidnapped and strapped to a “groping machine”. It’s a parody of those Vita games where you need to rub the image of a female character, except the goal is to prevent the mechanical hands from grabbing Komaru. Then it’s followed by a miniboss battle where you attack and strip a twelve year girl of her clothes. Thematically, it seems like it’s trying to criticize the exploitation of underaged characters in otaku culture, but it sends so many mixed messages that it’s hard to get anything out of it. There’s another boss battle later where Komaru’s clothes act as her armor, absorbing damage until she’s running around in her bra and panties. There’s no explanation or rationalization to this, even within the context of the narrative. Is it poking fun at games like Senran Kagura? If so, is it meant to be satirizing it? It’s not really clear.

There’s a lot of stuff in Ultra Despair Girls that’s really, really dark, much more so than the previous games, especially since it involves children. On a broad level though, Danganronpa isn’t just “dark”, it’s “darkly comedic”, it’s a series where someone is murdered by getting dipped in tempura then fried in a volcano. Outside of a few goofy references for fans and the sheer ridiculousness of Kurokuma, an all-black Monokuma-type doll that dresses like a hip-hop artist and jabbers in pop culture references, there’s little that’s funny or used in any comical matter. Additionally, you meet relatives of some of the other Danganronpa cast, but they’re just as quickly killed or serve little purposes to the plot. 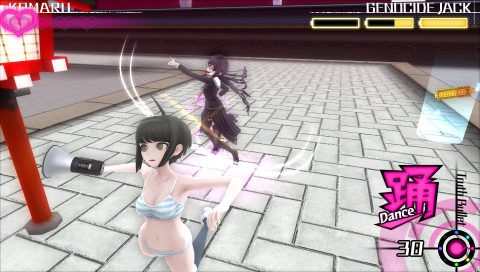 Komaru, by design, isn’t all that interesting of a character (like Makoto was at the beginning of the first game) and Toko was generally obnoxious in her original appearance. Most of the Danganronpa characters are one dimensional and that was never particularly a problem since there are so many of them. But through about half the game, all Toko does is complain, berate Komaru, and fantasize constantly about Byakuya. Over the course of the game, both the characters develop substantially, and while their arcs are predictable, they do turn out to be likeable by the end – surprisingly, especially in Toko’s cases – but getting to that point takes a little too long.

The cutscenes are really inconsistent, as some are handled with the in-game 3D engine with character portraits, some are pre-rendered CG in a similar style, some are done in the style of the anime, and some are animations using “flat” characters like the execution scenes in the other games. The game also has the “Kingdom Hearts problem” where it’s really weirdly paced – you walk for a few seconds, get a cutscene, walk a few more, maybe shoot a few more guys, then walk into another cutscene. 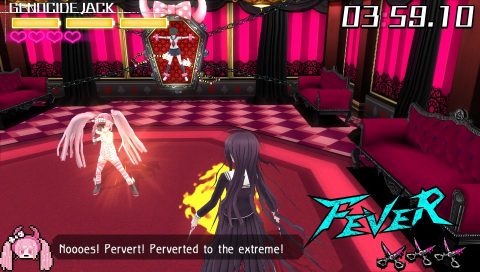 Ultra Despair Girls is a game that struggles to justify its existence. Purely as a shooter, it’s mediocre and undercooked. From a storyline standpoint, it focuses on what’s probably the least interesting aspect of Danganronpa– the world outside of the prison school/island – and doesn’t really say anything unique about it. It’s missing the intensity and the plot twists of the core games, and none of the characters (outside of a redeemed Toko) are all that intriguing. And unless it ends up being a major factor in the upcoming third Danganronpa title, there aren’t really any huge plot developments that make it essential to the overall story. It is, as the title implies, just another episode. As a bonus, it does include a brief novel starring Yasuhiro Hagakure, unlocked when the game is completed. 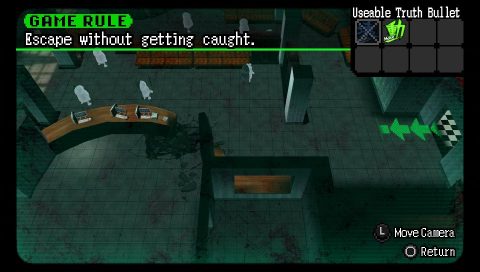 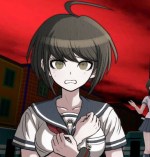 The younger sister of Makoto, who has been kidnapped and imprisoned in an apartment for over a year. A normal, unassuming teenager coming to grips with the nightmare that is her new reality. 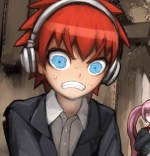 The self-proclaimed leader of the Warriors of Hope, even though he really isn’t. He is the “hero” class among their own interior RPG designations. 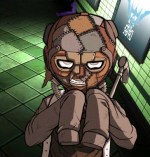 A boy who is apparently so ugly he wears a mask and a suit that hides his looks. He has extraordinarily low self esteem and not only berates himself but is constantly picked on by the other children. He is the “priest” class. 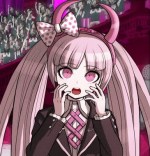 A child actress, who is obsessed with things that are “adorbs”. She is the “fighter” class. 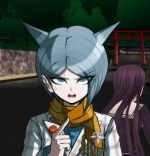 The assistant leader of the Warriors of Hope, of the “sage” class. He is the most serious out of the rest of the crew. 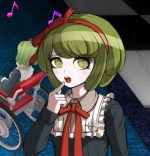 This wheerchair-bound girl is the true leader of the Warriors of Hope, and easily the most sadistic of the bunch. She is part of the “mage” class. 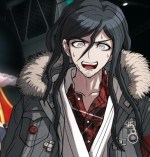 This young man is part of the Towa family, the corporation that essentially ruins Towa City. He is part of the resistance movement but is reluctant to make an offensive moves against the Monokumas and remains holed up in a secret underground location. 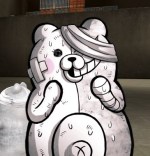 A fully white Monokuma, who is actually quite kind and gentle, and works along with Haiji in the adult resistance. 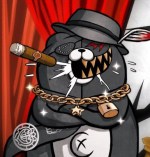 The advisor of the Warriors of Hope, this fully black Monokuma has a foul mouth and adorns himself with hip-hop accessories in an attempt to make him more badass.